Keeping Pets All In The Family

by (CBS): Snacks is one pampered pig… 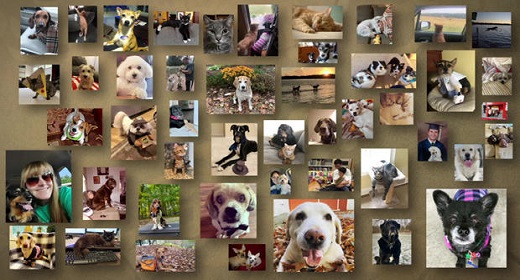 Is she just a little spoiled? “I have no say in these things,” said Tim Taylor, pointing to Dana Boyle. They are Snacks’ “pet parents” (that’s what they call pet owners these days).

“He says that,” Boyle replied.  “But then for Christmas, he bought a leopard print robe with a magenta boa and a big rhinestone ‘S'” – and another, human-size one for Dana, with a big ‘D’ on it.

Taylor and Boyle don’t care if people think they’re nuts. “I generally fall asleep on the couch with her and sleep there all night,” said Boyle, reclining with Snacks. “So, when we went furniture shopping the last time, we literally said, we need something deep enough, because I need to be able to spoon with my pig at night.”

Boyle and Taylor often welcome “Squirrel Girl” into their New Jersey home as well. The fluffy-tailed visitor is not exactly a pet, but close.

Nearly 85 million American homes are home to pets as well as people, according to the American Pet Products Association.

Three out of four dog and cat owners consider their pets members of the family.

So, no surprise there is scientific research proving that your pet is good for your health.

Allen McConnell, who heads the department of psychology at Miami University in Ohio, told correspondent Martha Teichner, “When we are in the presence of a pet, our stress levels drop. So, you can measure things like cortisol in the bloodstream, and it’s lower when you’re petting an animal than when you’re not. But we also have research from some of the great labs that have shown that when we pet animals, their cortisol goes down as well.”

Some of the benefits, according to McConnell: “Pet owners, compared to non-pet owners have higher self-esteem. They tend to get more exercise. They’re less lonely. We know that they tend to have lower blood pressure. They can engage with difficult math problems better than people who don’t have pets around them.”

McConnell’s latest work looks at anthropomorphizing – projecting human qualities on pets. “What we found is that as people view their pet as a family member to a greater degree, they get more well-being benefits from that,” he said.

Referring to them as your “fur babies”? Not so ridiculous after all.

Kaila Clark and Chloe Prieto, a lawyer and a teacher stuck at home because of coronavirus, tried for nearly eight months to adopt a shelter dog.

“It’s been quite a journey; lots of applications that went in,” said Clark.

Somebody else always beat them to it, until Peanut Butter showed up on the website of one of New York City’s animal care centers.

“It was really just meant to be!” Clark laughed.

Small dogs like Peanut Butter, or Rosey (about to be renamed Daisy by Octavia Osmon and her daughter, Zariyah) fly out of shelters. It’s the bigger, older dogs that are harder to place, particularly pit bulls.

Who hasn’t heard that during COVID everybody’s been adopting pets? Not true!

Nationally, a survey of nearly 1,300 shelters shows that adoptions were actually down 19 percent through September, compared to last year. That’s more than 200,000 animals. But then, fewer people have been giving up their pets during the pandemic.

A homebound nation has been a bonanza for Chewy.com. With 60,000 products available online, it’s like Amazon, but for pet food and supplies.  It now has 18,000 employees, 11 distribution centers, pharmacies, veterinary telemedicine, and 17 million customers.

Just since the pandemic began, Chewy has added more than 4.5 million active customers to the platform, according to Sumit Singh, Chewy.com CEO (and proud parent of “D”).

In a $100 billion dog-eat-dog business, Chewy.com tries to win loyalty by doing things like surprising customers randomly with a hand-painted portrait based on the picture they’ve uploaded to their pet’s profile.

“When this portrait shows up to your doorstep unannounced, total surprise and delight,” Singh said.

Something to stare at fondly whenever you’re not fulfilling your duty as a member of your pet’s staff. They’ve got your number!