by (Renewable Energy World): Lockheed Martin said on Monday that it is closer to powering clean energy after installing the first commercial product variant of GridStar Flow, its innovative long-duration energy storage technology… 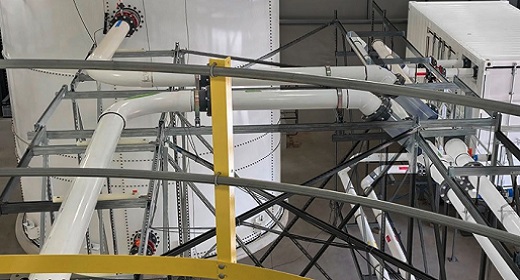 GridStar Flow Serial Number One (S/N01) was built at Lockheed Martin’s new 95,000 square foot facility Andover, Massachusetts where it will undergo extensive testing. The company said it is an internal asset that will be used to test the energy storage system’s ability to meet customers’ needs for customer-sited, long-duration, large-capacity energy storage systems.

S/N01 is a 2.5-MWh system, projected to discharge at full nominal power (500 kWAC) for five hours or up to 10 hours at half discharge power. Prior to S/N01, Lockheed Martin installed and operated two precommercial GridStar Flow prototypes. Key learnings from those systems were incorporated into the final S/N01 design, which will form the basis for commercial systems for customer-sited projects.

GridStar Flow is a redox flow battery based on the principles of coordination chemistry. This new electrochemistry consists of engineered electrolytes made from earth-abundant materials that enable GridStar Flow to deliver durability, flexibility and safety, said the company.

The system is designed for more than six hours of flexible discharge and is estimated to achieve 100% depth-of-discharge with minimal degradation for a design life of 20 years. These attributes would enable GridStar Flow to manage variability for extended periods, capture value across a wide range of time horizons and applications, including renewable energy integration, and evolve with market needs.

“S/N01 demonstrates GridStar Flow’s unique chemistry and architecture in a commercial system for the first time,” said Tom Jarvi, GridStar Flow program director. “This installation marks an important milestone for the program and the initiation of a rigorous test campaign to demonstrate GridStar Flow’s performance, reliability and maintainability for use cases including the effective deployment of clean, renewable energy.”

“The commissioning of S/N01 is a huge leap forward in the development and commercialization of GridStar Flow,” program chief engineer Mike Bufano said. “Each member of the program team contributed to this milestone, and it’s a testament to their dedication, resilience and creativity. With this installation in place, we are one step closer to creating a cleaner, more sustainable future.”