AI Has Cracked A problem That Stumped Biologists For 50 years. 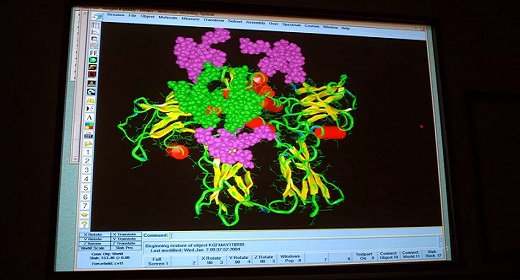 DeepMind, an AI research lab that was bought by Google and is now an independent part of Google’s parent company Alphabet, announced a major breakthrough this week that one evolutionary biologist called “a game changer.”

The breakthrough: DeepMind says its AI system, AlphaFold, has solved “the protein folding problem” — a grand challenge of biology that has vexed scientists for 50 years.

Proteins are the basic machines that get work done in your cells. They start out as strings of amino acids (imagine the beads on a necklace) but they soon fold up into a unique three-dimensional shape (imagine scrunching up the beaded necklace in your hand).

That 3D shape is crucial because it determines how the protein works. If you’re a scientist developing a new drug, you want to know the protein’s shape because that will help you come up with a molecule that can bind to it, fitting into it to alter its behavior. The trouble is, predicting which shape a protein will take is incredibly hard.

Every two years, researchers who work on this problem try to prove how good their predictive powers are by submitting a prediction about the shapes that certain proteins will take. Their entries are judged at the Critical Assessment of Structure Prediction (CASP) conference, which is basically a fancy science contest for grown-ups.

By 2018, DeepMind’s AI was already outperforming everyone at CASP, provoking some melancholic feelings among the human researchers. DeepMind took home the win that year, but it still hadn’t solved the protein folding problem. Not even close.

This year, though, its AlphaFold system was able to predict — with impressive speed and accuracy — what shapes given strings of amino acids would fold up into. The AI is not perfect, but it’s pretty great: When it makes mistakes, it’s generally only off by the width of an atom. That’s comparable to the mistakes you get when you do physical experiments in a lab, except that those experiments are much slower and much more expensive.

“This is a big deal,” John Moult, who co-founded and oversees CASP, told Nature. “In some sense the problem is solved.”

Why this is a big deal for biology

The AlphaFold technology still needs to be refined, but assuming the researchers can pull that off, this breakthrough will likely speed up and improve our ability to develop new drugs.

Let’s start with the speed. To get a sense of how much AlphaFold can accelerate scientists’ work, consider the experience of Andrei Lupas, an evolutionary biologist at the Max Planck Institute in Germany. He spent a decade — a decade! — trying to figure out the shape of one protein. But no matter what he tried in the lab, the answer eluded him. Then he tried out AlphaFold and he had the answer in half an hour.

AlphaFold has implications for everything from Alzheimer’s disease to future pandemics. It can help us understand diseases, since many (like Alzheimer’s) are caused by misfolded proteins. It can help us find new treatments, and also help us quickly determine which existing drugs can be usefully applied to, for example, a new virus. When another pandemic comes along, it could be very helpful to have a system like AlphaFold in our back pocket.

“We could start screening every compound that is licensed for use in humans,” Lupas told the New York Times. “We could face the next pandemic with the drugs we already have.”

But for this to be possible, DeepMind would have to share its technology with scientists. The lab says it’s exploring ways to do that.

Why this is a big deal for artificial intelligence

Over the past few years, DeepMind has made a name for itself by playing games. It has built AI systems that crushed pro gamers at strategy games like StarCraft and go. Much like the chess matches between IBM’s Deep Blue and Garry Kasparov, these matches mostly served to prove that DeepMind can make an AI that surpasses human abilities.

Now, DeepMind is proving that it has grown up. It has graduated from playing video games to addressing scientific problems with real-world significance — problems that can be life-or-death.

The protein folding problem was a perfect thing to tackle. DeepMind is a world leader in building neural networks, a type of artificial intelligence loosely inspired by the neurons in a human brain. The beauty of this type of AI is that it doesn’t require you to preprogram it with a lot of rules. Just feed a neural network enough examples of something, and it can learn to detect patterns in the data, then draw inferences based on that.

So, for example, you can present it with many thousands of strings of amino acids and show it what shape they folded into. Gradually, it detects patterns in the way given strings tend to shape up — patterns that human experts may not have detected. From there, it can make predictions about how other strings will fold.

This is exactly the sort of problem at which neural networks excel, and DeepMind recognized that, marrying the right type of AI to the right type of puzzle. (It also integrated some more complex knowledge — about physics and evolutionarily related amino acid sequences, for example — though the details remain scant as DeepMind is still preparing a peer-reviewed paper for publication.)

Other labs have already harnessed the power of neural networks to make breakthroughs in biology. At the beginning of this year, AI researchers trained a neural network by feeding it data on 2,335 molecules known to have antibacterial properties. Then they used it to predict which other molecules — out of 107 million possibilities — would also have these properties. In this way, they managed to identify brand-new types of antibiotics.

DeepMind researchers are capping the year with another achievement that shows just how much AI has matured. It’s genuinely great news for a generally terrible 2020.