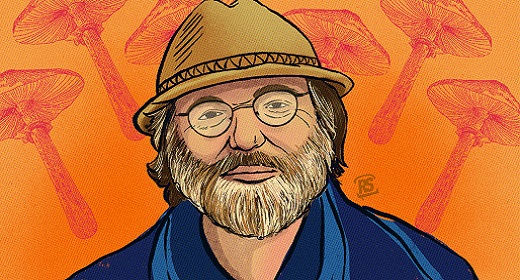 Stamets’s groundbreaking research into fungi holds the ability to restore natural balance to humanity and the planet. Moreover, he has dedicated his life to sharing his knowledge with the public.

WHO IS PAUL STAMETS?

Paul Stamets is a mycologist. Mycology is the branch of biology concerned with the study of fungi. Accordingly, Stamets is an industry leader in the world of mushrooms. In the name of fungi and planet restoration, he is a speaker, author, researcher, filmmaker, and entrepreneur. Additionally, he is dedicated to educating the world about the magic of this organism that exists all around us. Finally, Stamets’s work with mushrooms is considered by many academics to be capable of completely shifting the paradigm for worldwide planet restoration.

“We are now fully engaged in the sixth Major Extinction (“6 X”) on planet Earth. Our biosphere is quickly changing, eroding the life support systems that have allowed humans to ascend. Unless we put into action policies and technologies that can cause a course correction in the very near future, species diversity will continue to plummet, with humans not only being the primary cause, but one of the victims. What can we do? Fungi, particularly mushrooms, offer some powerful, practical solutions, which can be put into practice now.”

Stamets grew up in a small conservative town in Columbiana, Ohio. He was born into a family of academic wizards but felt like a bit of a black sheep because of his struggles with stuttering. Since Stamets was unable to look anyone in the eyes directly, or to hold a conversation without stuttering, his ability to grow in many areas of his life was correspondingly affected. However, Stamets’s life permanently changed for the better after a prolific experience with psilocybin mushrooms. One rainy day, Stamets took a heroic dose—and while under the influence he declared to the mushrooms that he would “stop stuttering now.” Once Stamets had arrived back from his trip, he no longer had a stutter. This particular experience was one of many that led Stamets to become the leader in psychedelic mushroom research that he is today.

Early on in his life, Stamets worked as a logger. He was cutting down trees, rather than hugging and studying them. But Stamets’s curiosity took over in 1974 when he began to take notice of the mushrooms that were growing in the forests where he was cutting. It was around this time that he started dedicating his time to mycology.

Since then, Stamets has built both a career and a loyal following by initiating studies into how many ranges of mushroom species can benefit the health of humanity and our planet. The core of his work lies in the fact that fungi have immune systems just like humans. Hence, mushrooms are cellular bridges between the two. His studies assert that we are closer to fungi than any other species. Therefore, Stamets’s work looks closely at the evolutionary relationship between humanity and fungi—and how it can be the lead generator for sustainability.

Stamet’s philosophy is that “MycoDiversity is BioSecurity.” He sees the ancient old growth forests of the Pacific Northwest as a resource of extreme value, especially in terms of their fungal genome. For those of you who are not familiar with the ERM genome, it is the haploid set of chromosomes in a gamete or microorganism, or in each cell of a multicellular organism.

If you look on the fungal genome as being soldier candidates protecting the U.S. as our host defense, not only for the ecosystem but for our population … we should be saving our old-growth forests as a matter of national defense.

Stamets is one of the stars and brains behind Fantastic Fungi, which is a film that came out in 2019. Below is a description directly from the this important film. You can purchase or rent this film here. But beware—this captivating film may produce uncontrollable ranges of emotions.

When so many are struggling for connection, inspiration and hope, Fantastic Fungi brings us together as interconnected creators of our world.

Fantastic Fungi, directed by Louie Schwartzberg, is a consciousness-shifting film that takes us on an immersive journey through time and scale into the magical earth beneath our feet, an underground network that can heal and save our planet. Through the eyes of renowned scientists and mycologists like Paul Stamets, best-selling authors Michael Pollan, Eugenia Bone, Andrew Weil and others, we become aware of the beauty, intelligence and solutions the fungi kingdom offers us in response to some of our most pressing medical, therapeutic, and environmental challenges.

Stamets’s studies have documented many positive effects of magic mushrooms on humans’ health. For instance, his mother was diagnosed with breast cancer and was given months to live. So Stamets developed a regimen for his mother that consisted of the mushroom species turkey tail (Trametesversicolor). After a month of the turkey tail regimen, her cancer had disappeared. Understandably, instances such as these propelled Stamets to develop his own line of mushroom products and supplements call Fungi Perfecti.

“Fungi Perfecti, LLC is a family-owned business dedicated to promoting the cultivation of high-quality gourmet and medicinal mushrooms. In business since 1980, we have been instrumental in developing new technologies and markets for gourmet mushrooms throughout the world. We keenly sense that fungi will play a pivotal role in the new industries of the 21st century. Gourmet and medicinal mushrooms will continue to appeal to organic gardeners, commercial cultivators, researchers, nutritionists, and ecological managers. Indeed, we foresee a quantum leap in their popularity when the public realizes that these fungi:

Stamets and Fungi Perfecti produce the mushroom supplement, Host Defense® Mushrooms. These supplements are mushroom mycelium based, and offer many system-specific benefits for whole body support. As we saw with the satori Stamets experienced both personally and with his mother, a regimen of these supplements can be life-changing. For example, some common benefits from regular intake are sharper cognition and memory, increased energy, and improved stamina. For this reason, this makes a regular mushroom supplement routine attractive for college students and the elderly. The most popular beneficial mushroom species are agarikon (Laricifomes officinalis), Chaga (Inonotus obliquus), Cordyceps (Ophiocordyceps sinensis), lion’s mane (Hericium erinaceus), Maitake (Grifola frondosa), reishi (Ganoderma lingzhi), and turkey tail.

Just as Stamets recognizes the impact mushrooms have in relationship to humanity, he also sees the Bees.

In 2014, Paul Stamets, along with his friend Dr. Steven Sheppard (Chair, Department of Entomology, Washington State University) and the Washington State Beekeepers Association teamed up in a research initiative called BeeFriendly™. This initiative helps reverse devastating declines in the global bee population that are critically threatening the world’s food security and natural ecosystem.

Then, in 2015, Stamets began experimenting with giving honey bees different mushroom mycelium extracts to drink. By doing so, he proved that these extracts provide essential nutrition that supports an immune benefit to bees. “Yay” for another mushroom win!

Joe Rogan Experience #1035—Paul Stamets is worth watching. The episode dives into more prolific experiences that Stamets has had with psilocybin mushrooms and the multiverse. For example, of note is that while using the mushrooms, Stamets experienced disastrous premonitions that proved true within a week’s time.

For more videos from Paul Stamets, check out his YouTube page.

Below are three of Stamets’s most popular sellers, along with his latest children’s book.

Mycelium Running: How Mushrooms Can Help Save The World
Growing Gourmet and Medicinal Mushrooms
Psilocybin Mushrooms of the World
From Bears and Trees to Mushrooms and Bees: A Children’s Book

Stamets has received numerous awards, including:

Fungi are the grand recyclers of the planet and the vanguard species in habitat restoration.

Vitamin D from mushrooms is not only vegan and vegetarian friendly, but you can prepare your own by exposing mushrooms to the summer sun.

The majority of modern medicines originate in nature. Although some mushrooms have been used in therapies for thousands of years, we are still discovering new potential medicines hidden within them.

If you do not know where the mushroom products you are consuming are grown, think twice before eating them.