The Legends, Folklore And Maybe The Ghost Of St David Uncovered

by Claire Barrand: As a resident of Abergavenny I will be a part of the annual celebrations across our country on March 1 which feature heavily… 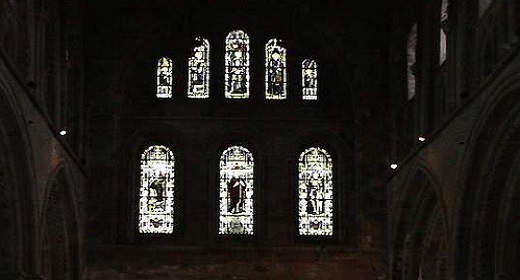 St David’s Day is of course, is the day when the proudly patriotic people of Wales celebrate their patron saint, St David and all thing Welsh.

As small children in primary schools and nurseries dress up in traditional Welsh costume or more modern-day Welsh rugby kits or even crazy daffodil hats, they will also be learning a little bit about the historical significance of their patron saint.

However most won’t know that there is a mystical side to St David and in fact he was a figure with supernatural powers according to our folklore.

Although we do know that St David did exist, much of what we know about him comes from Rhygyvarch the 11th Century author who wrote the Life of Saint David.

As it was written so long after David’s life, its reliability is dubious. Undoubtedly the embellishments were inspiring to believers in centuries past. It is written that thirty years before David was born, he was foretold by truth-telling oracles of angels, first to his father, then to Saint Patrick.

Also known as Dewi Sant in Welsh, St David was born in Caerfai in Pembrokeshire. His mother was St Non, niece of King Arthur and the daughter of a chieftain in around 500 AD.

The story of St Non, also known as Nonnita of Nonna, was said to have been the innocent victim of a heinous crime and “unhappily seized and exposed to the sacrilegious violence of one of the princes of the country.”

Rhygyvarch cited Sanctus (aka Sandde), the King of Ceredigion, as the rapist and recorded that the rape occurred when Sanctus happened upon Non, while travelling through Dyfed.

Legends say that even from the womb David, apparently, performed miracles as one day during her pregnancy Non entered a church to listen the preaching of the local priest and immediately the man was struck dumb.

Because he felt that her child was soon to surpass all religious teachers, the cleric found himself unable to continue whilst in the great man’s presence.

The birth came during a violent gale, with thunder and lightning, say the chronicles of Welsh history. As she gave birth to her son, on the cliff tops in Pembrokeshire during a torrential storm, it is said that an unearthly light illuminated the scene, all became calm and still.

At the moment the saint came into the world, lightning struck the cell in which confinement was taking place and a spring of crystal clear water burst forth on the spot, forming the well which still exists today.

The legend states that so intense was the pain of Non’s labour that she left her finger marks on the rock on which her son was born, and the stone split in two. A chapel was built on the spot and the pieces of stone with the marks remain buried under the altar foundations to this day.

You can still see that very spring, high on the clifftop above St Non’s Bay to the south of St David’s, where a simple stone arch covers what is known as St Non’s Well. It is still a place of pilgrimage, and before the Reformation, water from the well was taken and used as holy water at nearby St David’s Cathedral. Its waters are also said to cure all kinds of ailments.

A jealous and tyrannous local ruler, fearing the foretold power of the unborn child, plotted to kill David upon birth. But the great storm which erupted at the birth of the future saint, made it impossible for anyone to travel outdoors, and only the place where Non gave birth on the clifftop near St David’s, was bathed in light.

St David was raised by his mother and was schooled at the local monastery, Hen Fynyw, near to present day Aberaeron, and was taught by the blind monk St Paulinus.

He’s said to have cured his teacher of his blindness by making the sign of the cross over his face. Recognising the boy’s holiness, Paulinus sent him forth as a missionary across still-pagan Britain. Further missionaries to him to Brittany, Ireland and Jerusalem, before he was eventually made Archbishop of Wales.

He helped to spread the word of Christianity, and he founded around 12 monasteries during his lifetime.

Monasteries founded by St David were known for their extreme self-discipline, where monks abstained from worldly pleasures, living on a diet of only bread, vegetables, water and milk. They also did all hard labour themselves, including farming without the aid of ox to plough the fields. David became known as Dewi Dyfrwr (David the Water drinker) because of his modest monk’s diet of bread and water. St David also became the patron saint of vegetarianism because he forbade the eating of meat.

While little is known about St David’s life, he is known for performing miracles. Once, while preaching to a crowd in the village of Llanddewi Brefi, David is thought to have performed his most famous miracle.

As some of the crowd were finding it difficult to hear the sermon, when a white dove landed on David’s shoulder. As it did, the ground on which he stood is said to have risen to form a mighty hill, making it possible for the gathering crowd to finally see and hear him.

His symbol is not the leek or daffodil as many people think, but a white dove normally resting on a shoulder as he stands on a hill, often appearing in his portraits and on stained-glass windows depicting him. And he is also the patron saint of doves. Doves are considered pure due to their typical role as a messenger or a symbol of the Holy Spirit. Today, a church stands on the crest of the revered hill.

In other legends, it is said that a blind monk, Movi, was cured after drops of water splashed into his eyes as he held David. He also is said to have brought a child back to life by splashing the boy’s face with tears.

It was not all good however and at one of his own monasteries David became so unpopular with his monks for the life of austerity he made them live, that they tried to poison him.

David was informed about this by St Scuthyn, who as legend says, presumably in the absence of a ferry or a Ryanair flight, travelled from Ireland on the back of a sea-monster for the purpose.

David then blessed the poisoned bread and ate it; and came to no harm.

The connection of David’s mother St Non, being the niece of King Arthur echoes another common theme in the folklore of Pembrokeshire.

One of the many alleged sites of Arthur’s grave is at Bedd Arthur, high on the Preseli ridge, where the rocky outcrop of Cerrig Marchogion (the rocks of the knights), is also said to mark the spot where the mythical boar Twrch Trwyth slew several of Arthur’s knights and turned them into stone.

Of course, some folklore also suggests that the bluestones of Stonehenge’s inner circle were taken from the Preselis.

Another fable I have discovered during my research is that the concept of what is informally known as a ‘corpse candle’ is one that was allegedly made official by St David. As grim as the title of such a thing may be, corpse candles were a blessing for many people of the 6th Century.

There has always been a great fear regarding the time of a person’s death with many superstitions present in cultures across the world regarding the importance of the last rites and burial.

Often dreadful consequences are ascribed to the dead who go unattended – from the revival of the body as a vampire or zombie to the eternal banishment of the soul in Hell.

To die alone and without warning placed everything a person was in jeopardy.

Such was the anxiety the people of St David’s parish felt at the idea of their loved ones perishing without their knowledge that the old bishop was asked to negotiate with God and ask that some sign to be granted that death was impending.

The dim flickering of candles, has become a symbol for the fragility of human life. Glimpsed not only before the homes of the dying, corpse candles were often seen on the roads that led to churches consecrated with the rite of burial – ever diminishing fires dimming along the path from the village and into the next world.

During St David’s last sermon, he said words to his followers which were: “Be joyful, and keep your faith and your creed. Do the little things that you have seen me do and heard about. I will walk the path that our fathers have trod before us.”

“Do the little things” has become a well-known inspirational saying in Wales. St David, who was alleged to have lived to the ripe old age of 147 years, died in 588 and was buried in his cathedral church, where his tomb can still be seen in the west wall of the chapel of the Holy Trinity.

I wonder does the ghost of St David still watch over his parish to this day?

It was a cold, cloudy day, and the clouds obscured the sun. The picture before and after did not contain anything strange, so what he captured appears to be a face and a shining light? It has intrigued many paranormal groups in the area who speculate that this could indeed be the spirit of St David himself?

Whatever the true story of this legendary individual was, there is no doubt that St David was indeed a figure of much historical and spiritual significance that still carries with him much importance to the people of Wales today, and his story is a captivating one as of course it has all the right ingredients of fairy-tale magic that traditional legends convey. I shall be celebrating this week with my slice of Bara – Brith and Welsh Rarebit and telling my children all about the man that Wales so proudly heralds as their Patron.