by Justin Calderon: Singers of this ancient form of Swedish herd-calling corral farm animals with haunting melodies, drawing in cows, goats, sheep and ducks with each hypnotic note… 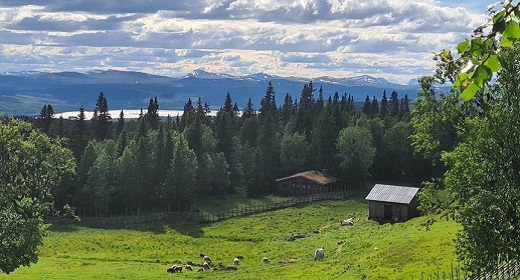 Skallskog is a secluded farm without running water or electricity that most Swedes have never heard of. Hidden deep in the Nordic wilderness, this humble collection of cattle barns and russet-red farmhouses may seem like a place of little importance. But this is where you’ll find the disappearing roots of an ancient Swedish singing tradition so intimately connected to nature that it can only be described as magic.

Kulning is a vocalisation tradition that dates back to the Middle Ages, where singers corral farm animals with hypnotic melodies, luring cows, goats, sheep and ducks towards them as if each note was charged with its own gravity. This mystical ability originates from centuries-old fäbods (summer farms) like Skallskog, where farmwomen would traditionally call their meandering animals back home as they grazed freely during the few warm months in these frigid lands. In recent decades, as women’s place in society has shifted, these sounds have transformed from farmland pragmatism to operatic elegance.

A kind of Nordic yodelling-meets-Dr Doolittle superpower, modern kulning has a bewitching quality that inspired Disney to include its entrancing melodies in Frozen 2. In 2016, YouTuber Jonna Jinton posted a video of her kulning to cows that racked up more than eight million views. And outdoor concerts and folk music festivals featuring trained kulning singers are continuing to popularise this spellbinding art of communicating with nature.

However, while kulning might be undergoing a pop-culture revival, the average Swede would be hard-pressed to identify where the tradition comes from. This form of herd-calling connects hyper-digital Sweden to its pastoral past. Yet, just as Swedes have become increasingly detached from the farm, the origins of kulning have come close to being forgotten. 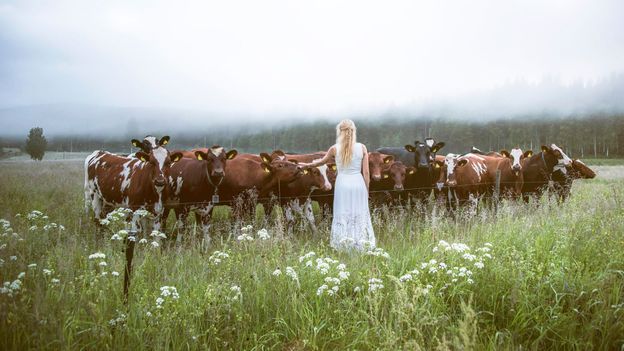 I visited Skallskog in late September as part of my search for a summer farm where kulning was once routinely practiced. After taking a three-hour train from Stockholm to Borlänge, I was met by Jennie Tiderman-Österberg, a trained opera singer and former punk rocker. She would be my guide for the day to Skallskog and the surrounding area, where she often practices kulning and researches the disappearing fäbod farming lifestyle.

“Kulning is a vocal technique born out of function. It happens across several regions in the Nordic countries. Norway, of course, but also historically in eastern Finland,” she told me on the drive from the train station to the farm, explaining that the musical tradition started in the stubborn soil of Scandinavia’s frozen farmlands that made kulning more necessity than art. Farmers here are migratory and herd their animals to fäbods during the summer months to graze on fresh grass. Unlike many herding cultures, Scandinavia’s shepherds were mostly women that employed high-pitched animal mimicry.

“The long, ornamented and melismatic calls are often directed towards cows. Goats and sheep have different sounds; often shorter, more rhythmical, and more guttural,” she said, adding that the “magic” that makes kulning work is a combination of controlling how one’s voice travels across natural landscapes and a knowledge of animal calls.

Tiderman-Österberg decided to reconnect with her culture’s musical roots during a turning point in her life. In 2017, she was a depressed and anxious new mother to twin baby girls when she discovered that kulning could provide an emotional and academic outlet for her talents as an opera singer and ethnomusicologist.

That first time Tiderman-Österberg practiced kulning, its high-pitched sounds awoke something inside her that shattered years of depression. “That was a huge moment. I felt life in me again,” she remembered.

Since then, Tiderman-Österberg has dedicated untold hours to a project that aims to rekindle interest in kulning’s origins. Fäbod Landscape and Herding Music, hosted by the Dalarnas museum, has culminated in several short films, an anthology of stories and a tour that brings visitors to hear kulning singers in open-air concerts set deep in remote Swedish forests. Kulning concerts are generally scheduled during the summer, and visitors can attend by contacting one of the participating fäbods.

I’d arrived in Sweden just in time to attend one of Tiderman-Österberg’s last kulning concerts of the season. The venue was a sunken silver mine in a hilly pine forest south of Borlänge that provided the necessary natural acoustics. An audience of about 20 people set up camping chairs around an impossibly brilliant turquoise pool formed by the sunken mine, while she and two other female kulning singers and a man with a cow horn spread out around us, facing away so as not to project directly at anyone.

In this sense, the outdoor setting is practical: “There are such strong sounds in kulning you could make someone deaf if you use it in a room or even in a concert hall,” said Tiderman-Österberg. 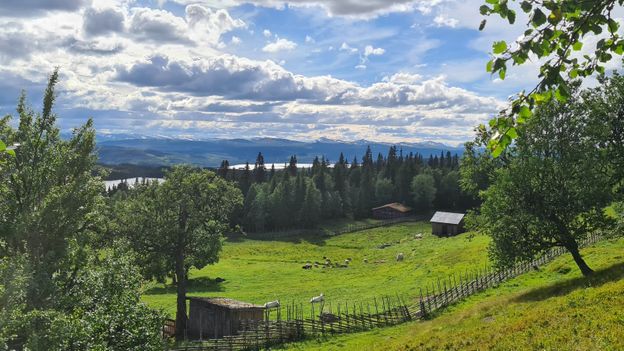 A piercing call suddenly burst through the majestic silence of the wilderness. Starting with an undulating melody from one of the singers hidden just beyond the tree line, the performers took turns calling their hypnotic chorus to invisible animals. The song’s primordial force seemed to awaken something unseen. Birds chirped in response, or perhaps as an accompaniment. A natural echo added to the music. Tree leaves shook; whether it was the wind or spirits, I could not tell.

When it was Tiderman-Österberg’s turn, she rang a cowbell to help visualise the animals she was calling upon. “I need to hear the sound of the cattle to call on them, even if they are imaginary in an open-air concert,” she later told me. “But I can almost sense the smell of them and hear their bellowing when I hear the cowbell. They become a part of the sense-scape that creates the right feeling for me. Then I get in contact with all the women who sang before me in these forests. It’s quite spiritual, really.”

Alice Gustafsson, 81, is one of these women. She learned to walk at Skallskog many decades ago, and still marches her animals here every summer, a 20km walk from the farm in Dalarna that her family uses for the rest of the year.

Like other farmers in this region, she calls to her animals. Sitting in her living room, I asked Gustafsson to demonstrate for me. Cautiously and softly, she sang out a cow call often heard on her farm: “Ko-new, ko-new dawwwww.” Her voice was husky, practical for calling animals. 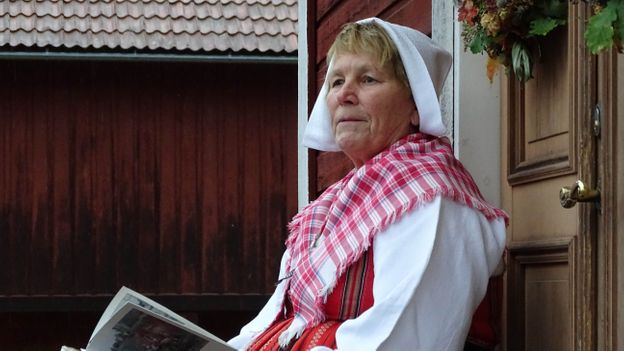 Then, she stopped to clarify something for me. These days, the popular perception of kulning has so dramatically changed that even women like Gustafsson who were born in a fäbod no longer see their herd-calling as kulning. Instead, kulning is perceived as inseparable from art; something to be performed by trained singers. This leaves farmers like Gustafsson feeling like they are not educated enough to be truly called kulning singers, even though they are the closest heirs to the tradition.

But what Gustafsson does is kulning, Tiderman-Österberg insists, even if she doesn’t necessarily call it that. Tiderman-Österberg says this is because kulning has gone through a “beautification” process. “A woman’s voice should be beautiful, angelic and not guttural, barking sounds,” she said. “Not everyone wants to hear those sounds, which are more truly connected to shepherds.”

However, Gustafsson’s relationship with her six cows – how she mimics their voices and cares for them – is a rare snapshot of what kulning originally was. “I don’t practice kulning the way that many of us talk about [it] today, but I do communicate with the animals. I call on them, talk with them and sing to them, just as a way to relate,” she said. “They are part of my family.”

“It’s nothing that we are thinking about. It’s something that we just do,” added Lars Arnesson, one of Gustafsson’s neighbours. “We practice it because we need to have our animals come home.” 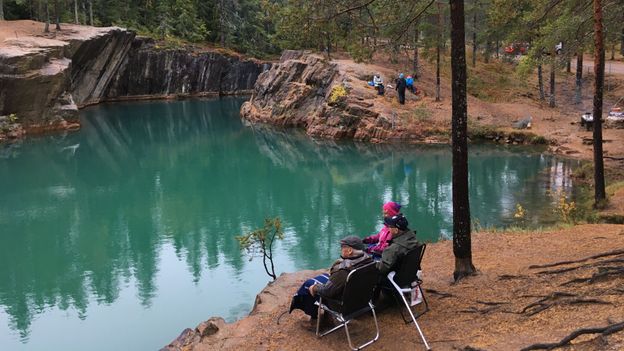 Tiderman-Österberg says that fäbod farmers like Gustafsson that still practice animal husbandry “are absolutely dying out”, and with them the final link to the origins of kulning.This has driven Tiderman-Österberg to seek protective status for them; today, she is tirelessly working to gain Unesco Intangible World Heritage status for the Nordic fäbods and kulning singing traditions.

However, even if the fäbod farmers become protected, kulning is already on a path of evolution to something else.

“The increased interest in this fascinating voice-use comes from the fact that kulning has changed from primarily the fäbod [to modern society],” said Susanne Rosenberg, professor in the Department of Folk Music at the Royal College of Music in Stockholm.

She acknowledges that modern concerts and performances are having an impact in restoring knowledge of its fäbod origins, but that kulning now largely exists in the context of musical art. “There is a revival. But when it comes to kulning as a voice-use, it has never been more alive,” she said.

Jinton concedes that “kulning will never be the same way that is once was. It was from farmers calling the animals, but maybe now it can it can evolve, and we can benefit from it in another way.” 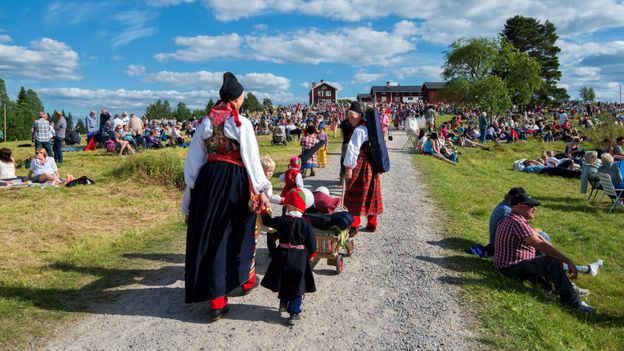 Jinton, who moved to the remote northern Swedish village of Grundtjärn in 2010, has developed a social following that relates to her angelic persona and passion for nature. One commenter on her channel called her the “real-life Elsa”. She laughs this off but admits there is “something enchanting” about sharing her love for kulning.

“It doesn’t matter if you are from Sweden or Africa, kulning gets the same reaction, no matter the culture,” she said. “I still don’t know what it is. Perhaps it has something to do with this kind of sound and frequency that reminds us of something very ancient that has been locked away in our DNA for a long time.”

“This music helps people, it heals people. I think kulning will continue to be good for us in this way.