by Edd Gent: Air travel is one of the worst contributors to global warming, burping out nearly a billion tons of CO2 a year… 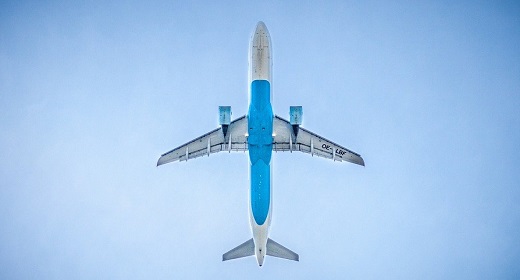 But what if we could close that circle by converting those greenhouse gases back into jet fuel?

In the face of phenomena like climate change, plastic pollution, deforestation, and land degradation people are increasingly questioning the short-term thinking that underpins our societies. Some have dubbed our current approach a “linear economy” where we extract raw materials, process them into products, and then dispose of them once they’ve outlived their usefulness.

As the global population grows, this strategy is becoming increasingly unsustainable. That’s prompting growing interest in a different model known as the “circular economy.” Rather than simply discarding our waste, we find ways to reuse it or recycle it into something more useful.

For years now, chemists have been trying to apply this idea to one of the most environmentally damaging sectors of our economy: the aviation industry. Not only do planes emit huge amounts of CO2, they also pump other greenhouse gases like nitrogen oxide directly into the upper atmosphere, where their warming effect is greatly increased.

The fossil fuels they burn to create all these emissions are hydrocarbons, which means they are made up of a combination of carbon and hydrogen. That’s led some to suggest it might be possible to create synthetic versions of these fuels by capturing the CO2 planes produce and combining it with hydrogen extracted with water.

If the energy used to power these reactions came from renewable sources, their production wouldn’t lead to any increase in emissions. And when these fuels were burned they would simply be returning CO2 captured from the atmosphere, making the fuel effectively carbon neutral.

It’s a nice idea, but the process of turning CO2 into useful fuels is more complex than it might sound. Most efforts so far have required expensive catalysts—substances that boost the speed of a chemical reaction—or multiple energy-intensive processing steps, which means the resulting fuel is far pricier than fossil fuels.

Now though, researchers from the University of Oxford have developed a new low-cost catalyst that can directly convert CO2 into jet fuel, which they say could eventually lay the foundation for a circular economy for aviation fuel.

“Instead of consuming fossil crude oil, jet aviation fuels and petrochemical starting compounds are produced from a valuable and renewable raw material, namely, carbon dioxide,” they write in a paper in Nature Communications.

Within a jet fuel CO2 circular economy, the “goods” (here the jet fuel) are continually reprocessed in a closed environment, they add. This would not only save the natural fossil resources and preserve the environment, but would also create new jobs, economies, and markets.

Creating jet fuel is particularly challenging because most routes for synthesizing hydrocarbons from CO2 tend to produce smaller molecules with only a few carbon atoms, like methane and methanol. Jet fuels are made up of molecules with many long chains of carbon atoms, and there have been few successful attempts to produce them directly from CO2 without extra processing.

But by combining findings from previous research, the group was able to create a low-cost iron-based catalyst that could produce substantial yields of jet fuel from CO2 and hydrogen. Iron is already commonly used in these kinds of reactions, but they combined it with manganese, which has been shown to boost the activity of iron catalysts, and potassium, which is known to encourage the formation of longer-chain hydrocarbons.

They prepared the catalysts using an approach known as the Organic Combustion Method (OCM), in which the raw ingredients are combined with citric acid to make a slurry that is then ignited at 662°F and burned for four hours to create a fine powder. This is a much simpler processing technique than previous approaches, which means it holds promise for industrial applications.

Scaling up this process to meet the demands of the aviation industry won’t be easy. Boosting the efficiency of the synthesis step is only one part of the puzzle. Collecting large amounts of CO2 from the air is very tricky, and splitting water to make hydrogen also uses a lot of power.

Plans are already afoot to build a pilot plant that will convert CO2 into jet fuel at Rotterdam Airport in the Netherlands, but as Friends of the Earth campaigner Jorien de Lege told the BBC, scaling up the technology will be a herculean task.

“If you think about it, this demonstration plant can produce a thousand liters a day based on renewable energy. That’s about five minutes of flying in a Boeing 747,” she said.

Nonetheless, developing a cheap, high-yield catalyst is a major step towards making the idea more feasible. Getting our planes to fly on thin air may sound like a wildly ambitious idea, but that goal has just come a little bit closer.