The Disciplined Pursuit Of Less

by Greg McKeown: Why don’t successful people and organizations automatically become very successful? One important explanation is due to what I call “the clarity paradox,” which can be summed up in four predictable phases:

Curiously, and overstating the point in order to make it, success is a catalyst for failure.

We can see this in companies that were once darlings of Wall Street, but later collapsed. In his book How the Mighty Fall, Jim Collins explored this phenomenon and found that one of the key reasons for these failures was that companies fell into “the undisciplined pursuit of more.” It is true for companies and it is true for careers.

Here’s a more personal example: For years, Enric Sala was a professor at the prestigious Scripps Institution of Oceanography in La Jolla, California. But he couldn’t kick the feeling that the career path he was on was just a close counterfeit for the path he should really be on. So, he left academia and went to work for National Geographic. With that success came new and intriguing opportunities in Washington D.C. that again left him feeling he was close to the right career path, but not quite there yet. His success had distracted him. After a couple of years, he changed gears again in order to be what he really wanted: an explorer-in-residence with National Geographic, spending a significant portion of his time diving in the most remote locations, using his strengths in science and communications to influence policy on a global scale. (Watch Enric Sala speak about his important work at TED). The price of his dream job was saying no to the many good, parallel paths he encountered.

What can we do to avoid the clarity paradox and continue our upward momentum? Here are three suggestions:

First, use more extreme criteria. Think of what happens to our closets when we use the broad criteria: “Is there a chance that I will wear this someday in the future?” The closet becomes cluttered with clothes we rarely wear. If we ask, “Do I absolutely love this?” then we will be able to eliminate the clutter and have space for something better. We can do the same with our career choices.

By applying tougher criteria we can tap into our brain’s sophisticated search engine. If we search for “a good opportunity,” then we will find scores of pages for us to think about and work through. Instead, we can conduct an advanced search and ask three questions: “What am I deeply passionate about?” and “What taps my talent?” and “What meets a significant need in the world?” Naturally there won’t be as many pages to view, but that is the point of the exercise. We aren’t looking for a plethora of good things to do. We are looking for our absolute highest point of contribution. 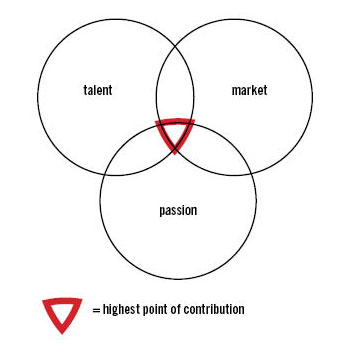 Enric is one of those relatively rare examples of someone who is doing work that he loves, that taps his talent, and that serves an important need in the world. His main objective is to help create the equivalent of National Parks to protect the last pristine places in the ocean — a significant contribution.

Second, ask “What is essential?” and eliminate the rest. Everything changes when we give ourselves permission to eliminate the nonessentials. At once, we have the key to unlock the next level of our lives. Get started by:

Third, beware of the endowment effect. Also known as the divestiture aversion, the endowment effect refers to our tendency to value an item more once we own it. One particularly interesting study was conducted by Kahneman, Knetsch and Thaler (published here) where consumption objects (e.g. coffee mugs) were randomly given to half the subjects in an experiment, while the other half were given pens of equal value. According to traditional economic theory (the Coase Theorem), about half of the people with mugs and half of the people with pens will trade. But they found that significantly fewer than this actually traded. The mere fact of ownership made them less willing to part with their own objects. As a simple illustration in your own life, think of how a book on your shelf that you haven’t used in years seems to increase in value the moment you think about giving it away.

Tom Stafford describes a cure for this that we can apply to career clarity: Instead of asking, “How much do I value this item?” we should ask “If I did not own this item, how much would I pay to obtain it?” And the same goes for career opportunities. We shouldn’t ask, “How much do I value this opportunity?” but “If I did not have this opportunity, how much would I be willing to sacrifice in order to obtain it?”

If success is a catalyst for failure because it leads to the “undisciplined pursuit of more,” then one simple antidote is the disciplined pursuit of less. Not just haphazardly saying no, but purposefully, deliberately, and strategically eliminating the nonessentials. Not just once a year as part of a planning meeting, but constantly reducing, focusing and simplifying. Not just getting rid of the obvious time wasters, but being willing to cut out really terrific opportunities as well. Few appear to have the courage to live this principle, which may be why it differentiates successful people and organizations from the very successful ones.