11 Beautiful Train Stations That Have Their Very Own Hotels

by Chandler Navarro: The romance of train travel—meandering through stunning landscapes in the comfort of an elegant sleeper car… 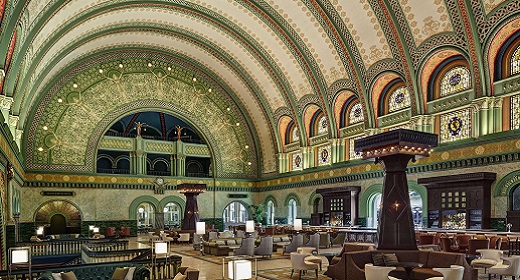 was always about prioritizing the journey rather than the destination. And while all that glamour has almost entirely given way to the convenience and speed of flying, the opportunity to take on one of travel’s greatest experiences remain; you simply have to book a train trip. And to extend and elevate that Old World fantasy, consider combining a journey by rail with an overnight (or two) in a historic train station hotel. The ease of being deposited by train at the doorsteps of your accommodations can’t be beat, and the best of these of properties layer on modern amenities atop centuries-old architectural majesty to make for a truly singular stay. Here are 11 train station hotels worth checking into.

All listings featured in this story are independently selected by our editors. However, when you buy something through our retail links, we may earn an affiliate commission. This gallery was originally published in May 2013. It has been updated with new information. 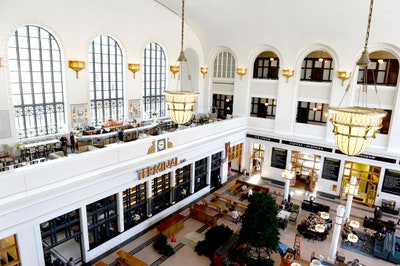 The original Denver Union Station dates back to 1881. When it reopened in July 2014 following a $54 million renovation, it also welcomed the Crawford Hotel, a 112-room property spanning both wings of the building. Many of these hotel rooms were repurposed from existing structures and feature historic design elements. For instance, the third-floor rooms were previously offices; old safes are built into many of these walls. Rooms on the fourth floor, on the other hand, occupy attic spaces so they come with exposed bricks and massive wood beams. The station’s Great Hall is quite stunning, too, and acts as the public lobby of the hotel. Look for the 2,300 plaster columbines (Colorado’s state flower) and 1,200-pound chandeliers—recreations of the originals from over 100 years ago. 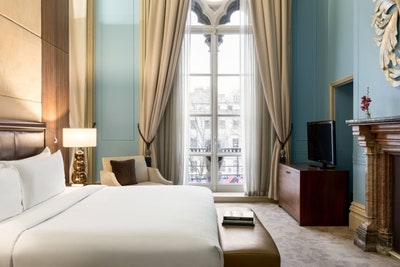 Making an architectural splash in a city like London is no easy task. But it’s hard not to notice the old-meets-modern grandeur of the Victorian-style St. Pancras Renaissance Hotel. Designed by legendary Gothic revival architect Sir George Gilbert Scott in 1873, the property operated as the Midland Grand Hotel until 1935. Today, the renovated hotel retains many original details, including a three-story, wrought iron staircase that has been completely restored, down to its fleur-de-lis wallpaper. Its newest venue is The Hansom, a cocktail bar that combines Victorian architecture (dramatic lamp posts, high vaulted ceilings, Barlow Blue ironwork) with more contemporary flourishes like the glossy marble surfaces and plush velvet upholstery. 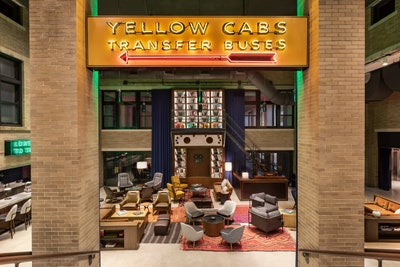 In the heart of the thriving South Main district, the now 106-year-old transportation hub has been meticulously converted into a music-obsessed 123-room hotel. Soaring 12-foot ceilings and double-hung windows hint at the building’s former life, as do the original neon signage in the lobby, the arrival and departure letter board in the grand ballroom, and the waiting-room pews that now sit at the entrance of Bishop, the hotel’s brasserie. 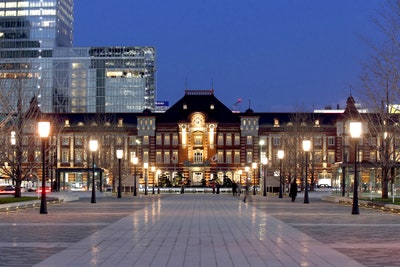 From a purely culinary point of view, there’s probably no better train station in the world than the Japanese capital’s main transportation hub. Stay at the aptly named Tokyo Station Hotel, located inside the station’s 100-year-old red-bricked Marunouchi Building. There are 150 rooms and suites, but the ones that are most unique are outfitted with windows that look out onto a copula-topped station concourse. The hotel’s address makes getting around Tokyo (and beyond) a breeze, but its amenities are worth sticking around for: ten on-premise restaurants and bars, plus a spa outfitted with onsen-style baths. 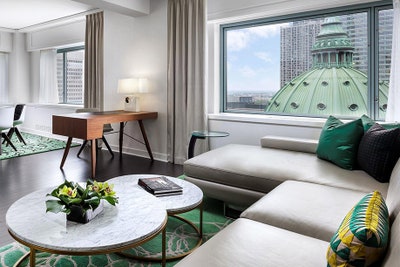 Perched atop Montreal Central Station, Canada’s largest hotel east of Toronto opened in 1958 as a beacon of the mid-century modern movement. In the 1950s, Fairmont The Queen Elizabeth was one of the very first hotels in North America to feature escalators, centralized air conditioning, and direct dial telephones in each of its 1,216 rooms. From its lower level, VIP guests (the likes of Indira Gandhi, Mikhail Gorbachev, and Jimmy Carter have stayed here) can actually reach the train tracks directly. In 2017, the 21-story property took on a modernizing renovation to the tune of 140 million Canadian dollars that shrunk its room count to 950, making most of them larger, and introduced new venues including event spaces and an eight-cabin spa. 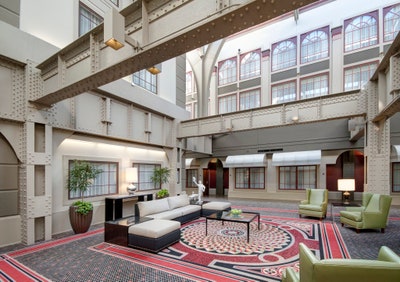 This three-story hotel located in the historic train shed of Indianapolis’ Union Station—done in Romanesque-revival style in 1888—was built on top of the station’s first eight tracks. Only three tracks are still operating today. On the hotel’s second floor, guests can stay in 13 Pullman train cars from the 1920s, which were brought up from southern Indiana and then driven into the building using the existing railways. According to Crowne Plaza, this is the only hotel in the world that houses train cars inside its physical structure. But perhaps more stunning than those train cars are the hotel’s architectural details. The Grand Hall, for example, features barrel ceilings measuring 60 feet and wheel windows that were temporarily blacked out during World War I. 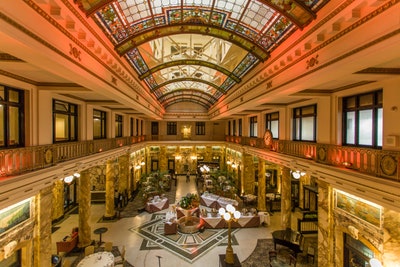 Originally built as an opulent French Renaissance–style train station in 1908 (called the Delaware, Lackawanna, and Western Railroad Station), the pride of Scranton and one of the country’s most beautiful terminals was turned into a 146-key hotel in 1983. And thankfully, many of the historic building’s glamorous design elements were kept, including mosaic tile floors, the exterior eight-foot-tall bronze clock, a Tiffany stained-glass ceiling, rare Sienna marble walls, and 36 Grueby Faience murals depicting bucolic landscapes—which you can find surrounding the Grand Lobby. 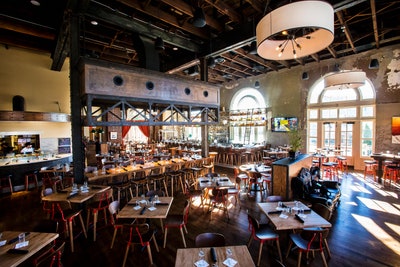 To save Chattanooga’s Terminal Station (the first railway station in the south when it opened in 1909) from being demolished in the 1970s, a group of businessmen invested approximately $4 million into turning the Beaux Arts structure into a vacation destination. In addition to hotel rooms, the terminal complex also has retail shops, a comedy club, and a stunning rose garden. Recently procured by hospitality brand Life House Hotels, the property is set to debut a reimagined look in winter 2021 with a new wine bar, 40-seat cinema, a recording studio, and revamped suites inside historic Pullman train cars. 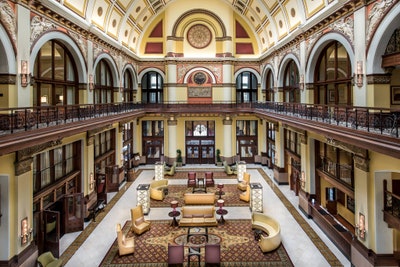 Nashville’s 19th century Neo-Romanesque train station—now a 125-room hotel that’s part of Marriott’s Autograph Collection—is an impressive feat of architecture from the outside. But the 120-year-old original details maintained indoors are even more noteworthy: The atrium lobby has a 65-foot barrel-vaulted ceiling made of stained glass, bas-relief angels, and gold medallions, and there’s a turn-of-the-century arrivals board behind the check-in desk. 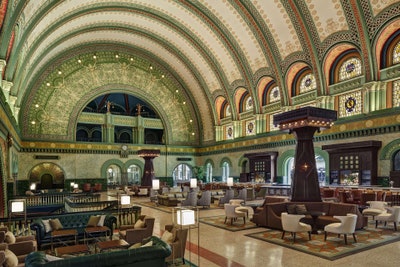 This National Historic Landmark is as stately inside as it is from afar. The striking Headhouse Grand Hall lobby features antique archways with gold leaf detailing, stained glass windows, and street lamp–style lighting. In 2019, two new attractions joined the hotel at the station: the 200-foot-tall Wheel, an observation wheel with 72 climate-controlled gondolas, and an aquarium home to 13,000 animals. Some of the hotel rooms now look into the aquarium’s exhibition spaces. 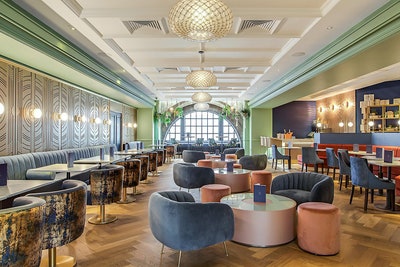 When it reopens in December as a member of IHG’s Voco brand, this 230-room hotel, which was inaugurated in 1883 and is a protected Category A-listed building (which in Scotland means it’s a structure of special historic or architectural interest), will operate with a much more casual and sustainable lens. Bedding will come from 100 percent recycled materials and bathrooms are outfitted with aerated shower heads to reduce water usage. Centuries-old details, however, are still plentiful including the grand staircase, the embossed wallpaper of the Caledonian Railways Company coat of arms, and the dome-topped champagne lounge overlooking the bustle of the terminal.