by Chris Hall: While smartphones, smart homes and even smart wearables are growing ever more advanced, they’re still limited by power. The battery hasn’t advanced in decades. But we’re on the verge of a power revolution… 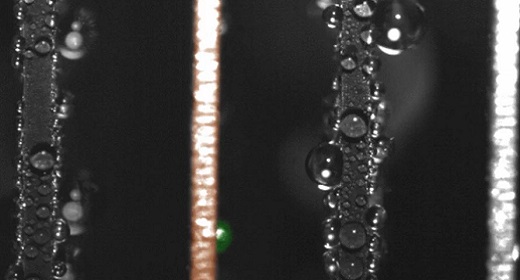 Big technology and car companies are all too aware of the limitations of lithium-ion batteries. While chips and operating systems are becoming more efficient to save power we’re still only looking at a day or two of use on a smartphone before having to recharge.

While it may be some time before we get a week’s life out of our phones, development is progressing well. We’ve collected all the best battery discoveries that could be with us soon, from over the air charging to super-fast 30-second re-charging. Hopefully, you’ll be seeing this tech in your gadgets soon.

NAWA Technologies has designed and patented an Ultra Fast Carbon Electrode, which is says is a game-changer in the battery market. It uses a vertically-aligned carbon nanotube (VACNT) design and NAWA says it can boost battery power ten fold, increase energy storage by a factor of three and increase the lifecycle of a battery five times. The company sees electric vehicles as being the primary beneficiary, reducing the carbon footprint and cost of battery production, while boosting performance. NAWA says that 1000km range could become the norm, with charging times cut to 5 minutes to get to 80 per cent. The technology could be in production as soon as 2023.

Researchers at the University of Texas have developed a lithium-ion battery that doesn’t use cobalt for its cathode. Instead it switched to a high percentage of nickel (89 per cent) using manganese and aluminium for the other ingredients. “Cobalt is the least abundant and most expensive component in battery cathodes,” said Professor Arumugam Manthiram, Walker Department of Mechanical Engineering and director of the Texas Materials Institute. “And we are completely eliminating it.” The team says they have overcome common problems with this solution, ensuring good battery life and an even distribution of ions.

While the emission-reducing properties of electric vehicles are widely accepted, there’s still controversy around the batteries, particularly the use of metals like cobalt. SVOLT, based in Changzhou, China, has announced that it has manufactured cobalt-free batteries designed for the EV market. Aside from reducing the rare earth metals, the company is claiming that they have a higher energy density, which could result in ranges of up to 800km (500 miles) for electric cars, while also lengthening the life of the battery and increasing the safety. Exactly where we’ll see these batteries we don’t know, but the company has confirmed that it’s working with a large European manufacturer.

Looking to overcome the problem of unstable silicon in lithium-ion batteries, researchers at University of Eastern Finland have developed a method to produce a hybrid anode, using mesoporous silicon microparticles and carbon nanotubes. Ultimately the aim is to replace graphite as the anode in batteries and use silicon, which has ten times the capacity. Using this hybrid material improves the performance of the battery, while the silicon material is sustainably produced from barley husk ash.

Monash University researchers have developed a lithium-sulphur battery that can power a smartphone for 5 days, outperforming lithium-ion. The researchers have fabricated this battery, have patents and the interest of manufacturers. The group has funding for further research in 2020, saying that continued research into cars and grid use will continue.

The new battery technology is said to have a lower environmental impact than lithium-ion and lower manufacturing costs, while offering the potential to power a vehicle for 1000km (620 miles), or a smartphone for 5 days.

IBM Research is reporting that it has discovered a new battery chemistry that is free from heavy metals like nickel and cobalt and could potentially out-perform lithium-ion. IBM Research says that this chemistry has never been used in combination in a battery before and that the materials can be extracted from seawater.

The performance of the battery is promising, with IBM Research saying that it can out-perform lithium-ion in a number of different areas – it’s cheaper to manufacture, it can charge faster than lithium-ion and can pack in both higher power and energy densities. All this is available in a battery with low flammability of the electrolytes.

IBM Research points out that these advantages will make its new battery technology suitable for electric vehicles, and it is working with Mercedes-Benz amongst others to develop this technology into a viable commercial battery.

While lithium-ion batteries are everywhere and growing in use cases, the management of those batteries, including determining when those batteries have reached the end of their life is difficult. Panasonic, working with Professor Masahiro Fukui of Ritsumeikan University, has come up with a new battery management technology that will make it a lot easier monitor batteries and determine the residual value of lithium-ion in them.

Panasonic says that its new technology can be easily applied with a change to the battery management system, which will make it easier to monitor and evaluate batteries with multiple stacked cells, the sort of thing you might find in an electric car. Panasonic that this system will help the drive towards sustainability by being able to better manage reuse and recycling of lithium-ion batteries.

Research has demonstrated a charging method that takes us a step closer to extreme fast charging – XFC – which aims to deliver 200 miles of electric car range in about 10 minutes with 400kW charging. One of the issues with charging is Li plating in batteries, so the asymmetric temperature modulation method charges at a higher temperature to reduce plating, but limits that to 10 minutes cycles, avoiding solid-electrolyte-interphase growth, which can reduce battery life. The method is reported to reduce battery degradation while allowing XFC charging.

This alternative type of lithium-ion battery uses silicon to achieve three times better performance than current graphite li-ion batteries. The battery is still lithium-ion like the one found in your smartphone, but it uses silicon instead of graphite in the anodes.

Scientists at the University of California Riverside have been focused on nano silicon for a while, but it’s been degrading too quickly and is tough to produce in large quantities. By using sand it can be purified, powdered then ground with salt and magnesium before being heated to remove oxygen resulting in pure silicon. This is porous and three-dimensional which helps in performance and, potentially, the life-span of the batteries. We originally picked up on this research in 2014 and now it’s coming to fruition.

Silanano is a battery tech startup that’s bringing this technique to market and has seen big investment from companies like Daimler and BMW. The company say that its solution can be dropped into existing lithium-ion battery manufacturing, so it’s set for scalable deployment, promising 20 per cent battery performance boost now, or 40 per cent in the near future.

While wireless inductive charging is common, being able to capture energy from Wi-Fi or other electromagnetic waves remains a challenge. A team of researchers, however, has developed a rectenna (radio wave harvesting antenna) that is only several atoms think, making it incredibly flexible.

The idea is that devices can incorporate this molybdenum disulphide-based rectenna so that AC power can be harvested from Wi-Fi in the air and converted to DC, either to recharge a battery or power a device directly. That could see powered medical pills without the need for an internal battery (safer for the patient), or mobile devices that don’t need to be connected to a power supply to recharge.

Energy harvested from the device owner

You could be the source of power for your next device, if research into TENGs comes to fruition. A TENG – or triboelectric nanogenerator – is a power harvesting technology which captures the electric current generated through contact of two materials.

A research team at Surrey’s Advanced Technology Institute and the University of Surrey have given an insight into how this technology might be put into place to power things like wearable devices. While we’re some way from seeing it in action, the research should give designers the tools they need to effectively understand and optimise future TENG implementation.

Nanowires, a thousand times thinner than a human hair, pose a great possibility for future batteries. But they’ve always broken down when recharging. This discovery uses gold nanowires in a gel electrolyte to avoid that. In fact, these batteries were tested recharging over 200,000 times in three months and showed no degradation at all.

Solid state batteries traditionally offer stability but at the cost of electrolyte transmissions. A paper published by Toyota scientists writes about their tests of a solid state battery which uses sulfide superionic conductors. All this means a superior battery.

The result is a battery that can operate at super capacitor levels to completely charge or discharge in just seven minutes – making it ideal for cars. Since it’s solid state that also means it’s far more stable and safer than current batteries. The solid-state unit should also be able to work in as low as minus 30 degrees Celsius and up to one hundred.

The electrolyte materials still pose challenges so don’t expect to see these in cars soon, but it’s a step in the right direction towards safer, faster-charging batteries.