by Catherine Rampell: For the first time in six decades, Ralph Greco isn’t in a classroom. He hasn’t retired. He wants to teach. In-person classes are risky, though, for an 88-year-old… 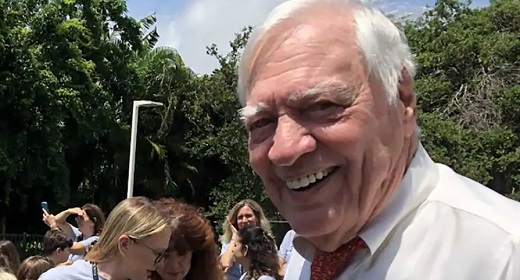 “They thought I was going to die if I taught little kids this year,” he grumbled this week about his Florida school’s administrators, who are understandably protective of their star English instructor.

So, Mr. Greco has taken a pandemic-driven sabbatical. Dozens of students have therefore been spared his infamously terrifying drills on antecedents and appositives, dependent clauses and dangling participles. They might think they got a reprieve; I know better.

I was in his sixth-grade English class decades ago. And he deserves much of the credit (or, depending on your politics, blame) for any success I’ve had as a writer.

Repaying a teacher for such gifts is impossible. Perhaps, though, I can help him avoid a lapse in his pedagogy by sharing some of his lessons here. I don’t always succeed in following them, but I try.

1. Learn all the rules of language, even the stodgy-seeming ones. You will find freedom in structure.

Mr. Greco, with his bushy white eyebrows and signature glower, cultivated a reputation for grammatical grouchiness. Students often began his course in a state of terror. He once threatened to kick me out of class for asking, “Is it hot in here, or is it just me?” (The final word should have been “I,” nominative case.) Sometimes, when a student submitted an essay with too many errors, he ate it. That is: He chewed and swallowed the paper, comma splice by comma splice.

Initially, this exactitude felt constricting. But once we mastered Mr. Greco’s rules — learned who from whom, and whatnot — they were liberating. He taught us the masonry of language. Now we could build whatever we liked. I remember realizing, at age 12, how awesome it was that words and sentences could do my bidding.

2. If you must break a grammatical rule, do so on purpose, not out of sloppiness. Do so only if it serves your audience.

Syntactic stickler though he was, Mr. Greco tolerated the use of sentence fragments for stylistic emphasis. But only if we clearly labeled them afterward with an “F” to indicate the error was deliberate. (“F.”)

The best excuse for a grammatical error, Mr. Greco advised, is clarity. If adhering to a rule might lead someone to misunderstand you, by golly, break the rule. Clarity über alles. (“F.”)

3. If a reader doesn’t understand what you are trying to say, that is your fault — not the reader’s.

Sometimes I complain about cranky emails I receive from people who misread something I wrote. Then I remember Mr. Greco’s dictum that the burden of clarity is always on the writer.

Dense, incomprehensible prose is not an indicator of intellect. It signals that a writer doesn’t sufficiently understand the subject matter or was too lazy to write something clearer.

I learned this the hard way,after rushingto be the first student to hand in some in-class essay. Mr. Greco docked me for boneheaded mistakes I might have noticed had I used all my allotted time to review my work.

Now I reread and rewrite and nitpick as long as I can. (To my editors: Sorry — and please blame Mr. Greco.)

5. You must be willing to write, say and even be things that are unpopular.

Writing well requires more than understanding proper sentence structure. It also takes moral courage. “If you are a critical thinker,” he reminded me in a call this week, “you are going to find you are sometimes at odds and disagreement with your peers, your government, your church or your synagogue, with your family.” You must be brave enough to sometimes stand apart.

My years at Mr. Greco’s school were not, alas, happy ones. Like many children, I was bullied, in my case for being small and studious and a touch weird. (Less euphemistically: I was a nerd.) There were probably things I could have done — interests I could have feigned, coursework I could have deliberately tanked — to reduce the torment.

Mr. Greco taught me there was dignity in not always fitting in.

My sixth-grade schedule had a gap during which I was supposed to study in the library. Instead, I usually popped in on Mr. Greco. We talked about philosophy, tennis, the novel he was writing. Although always my instructor, he was also a friend when I had few others.

I asked him this week why he tolerated my frequent intrusions. That was supposed to be his free period, after all. He said he enjoyed talking with bright kids. Then he added, after some hesitation, that he knew I was having trouble with the other children. “I guess I thought those sessions were helpful to you,” he said.They were, more than he knew. Merry Christmas, Mr. Greco, and thank you.