by Arthur C. Brooks: The Dalai Lama teaches that we are all interconnected and inseparable from one another. Acknowledging that can make us less lonely, more compassionate, and better investigators of the truth… 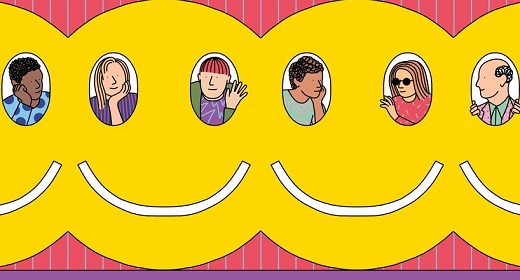 In the old testament, God often communicates with His people through violent events: floods, plagues, wars. But not in the story of Elijah. As the prophet waited for God’s message to him, there was a wind so strong that it “broke the rocks in pieces,” but God was not there. Nor was He in an earthquake, or a fire. Rather, He came to Elijah in a “still small voice,” which compelled Elijah to draw near, so he could hear it.

We might call this the paradox of prophecy: Many of the most profound truths come not in shouting and scandal but, rather, in a whisper. In our noisy world, they are easily missed or dismissed.

A living example of this paradox comes from Tenzin Gyatso, His Holiness the 14th Dalai Lama, the spiritual leader of the Tibetan people and global leader of Tibetan Buddhism. His message, always delivered softly and calmly and punctuated with infectious laughter, soothes the spirit in a world of shouting. You could easily be persuaded that he is a fairly anodyne figure, someone who endeavors only to bring peaceful, good feelings in a turbulent world, without disrupting any established dogmas.

But listen closely to his still, small voice, and you will receive transgressive truths. Today, conventional wisdom too often teaches that people who disagree with us are obstacles; we must coerce others to follow our wishes; happiness is supposed to come from getting exactly what we want. In contrast, the Dalai Lama asks us to treat others gently as sisters and brothers, even if they disagree with us; to love unconditionally; to reject self-centeredness, which he sees as the source of unhappiness.

To take his message to heart means setting yourself apart from the orthodoxies that rule our culture—including, perhaps, some that you don’t even know are influencing your assumptions and limiting your thinking.

For the past seven years, one of my most treasured collaborative friendships has been with His Holiness. Beyond our writing and interviews, he has given me personal advice that has deepened my religious faith, guided my career, and improved my relationships. Ordinarily around this time, I visit him at his monastery in Dharamsala, India. But not this year, due to the pandemic—so, like the rest of the world, we met by Zoom. We had a public conversation in front of my graduate students and a worldwide live-streamed audience.

The Dalai Lama’s broad message sounded straightforward from the start of our conversation: To attain happiness, one must be able to say, “My life is something meaningful, something useful.” This, in turn, requires an understanding of our common purpose: “the taking care of each other,” which is our “human nature.”

Nothing controversial there, right? Wrong. Gentle words, yet a very radical claim.

Many Western philosophers, from Thomas Hobbes to Friedrich Nietzsche to Herbert Spencer, reject the idea that looking after one another with compassion is part of our nature. On the contrary, these thinkers and their traditions argue that people are naturally self-interested and untrustworthy. As such, coercion—or, at best, cold negotiation—is the only way we can attain our ends. This outlook might sound harsh, but it guides more of day-to-day modern life than you might expect. Consider the more than $100 billion we spend each year on policing in the United States, and the $429 billion each year on tort litigation. Or simply consider how political leaders all around the world—including so many today on the American left and right—have embraced fear and hatred of people with different views as if it were perfectly normal.

The Dalai Lama rejects this negative view of human nature. On the contrary, he believes that self-centeredness represents an emotional and moral disequilibrium. “Self-centered thinking … is against” nature, he told me in our conversation, and the “selfish way is actually destroying your own happy” life. By extension, leaders who foment fear of one another instead of bringing us together deliver discontent to the people they lead.

For Buddhists, this argument is based not on aspiration, but on simple truth: Individual identity is an illusion; we are, in fact, all interconnected and inseparable from one another. As the Buddhist monk and writer Matthieu Ricard puts it, “Our grasping to the perception of a ‘self’ as a separate entity leads to an increasing feeling of vulnerability and insecurity … This imagined self becomes the constant victim hit by life’s events.”

To build a world with more well-being, the Dalai Lama says, we must first acknowledge the fact that we are each “one of seven billion human beings.” Far from meaning that we should somehow recede into a lumpen disindividuated mass, his point is that being one of many empowers us to see sisters and brothers all around us for whom we can show compassion, and who can do the same for us. It can also attenuate the loneliness that comes from a society that encourages us to celebrate uniqueness above all else, creating barriers with others where they should not exist. Our individuality is important, he argues, but not to the exclusion of what links us together. Denying his own specialness, the Dalai Lama often states, “I am a simple Buddhist monk,” and he means it.

These gentle ideas transgress the claims of leaders who win power with divisive appeals to identity. “We really need a sense of oneness of human beings,” His Holiness said in our talk. “You see [the] emphasis on my nation, their nation; my religion, their religion.” This, he argued, is not just destructive but unnatural, leading us to misery. Happiness, in contrast, comes from acknowledging the reality that we have a common story, not by emphasizing artificial identity differences.

In my conversations with the Dalai Lama, I have found the metaphor of an aspen tree to be helpful for understanding the illusion of individual identity. When we look at an aspen stand, we see many individual trees; in reality, a stand of aspens has but one root system. Indeed, possibly the world’s most massive single living organism is the Pando aspen grove in Utah, spanning 107 acres. Similarly, while we might appear to ourselves as individual entities, we are, in Buddhist thought, shoots off the same root.

For the Dalai Lama, therefore, to advocate human unity is not just the right thing to do morally; it is the only way to conform ourselves to reality. Tribalism and polarization, he argues, are based on an illusion. It follows that those of us who are dedicated to unity must do our part to avoid the narrow-minded thinking that can come from focusing too much on our polarizing identities. This is especially true of educators, His Holiness told me: “Our education system must be more compassionate,” and must teach students to understand humanity not as interest groups at odds with one another, but as one interconnected family.

Of course, truth requires constant investigation and evaluation, not blind faith to any ideology, or even to this fundamental tenet of Buddhism. An unquestioning reliance on any authority is “dangerous,” His Holiness said, because a dogmatic, prejudiced worldview makes objective investigation of life’s questions impossible.

Furthermore, we must be open to, and respectful of, different ideas and views. As the Dalai Lama puts it, “Our basic mind should be very neutral.” This comes from the Nalanda Buddhist tradition, in which, he says, monks are trained always to ask why and to never simply say yes. Not even to a master—not even to His Holiness.

All this might sound not just transgressive, but paradoxical: We are happy when we live in our natural state, which is in harmony with each other; this is due to the fact that our individual nature is an illusion; we should teach this for the sake of truth and greater happiness; but we should also question this continually, in a spirit of openness and mutual respect.

You might argue that this is logically inconsistent. It was hard for me to grasp, too. But it is based on thousands of years of thought, and, it seemed to me, worthy of a few years of mine. Over time, it has changed my worldview radically.

If you are inclined to dismiss these ideas as hopelessly naive, ask yourself whether it could be because you are beholden to dogmas that are so ingrained in your daily life that you hardly recognize them anymore—dogmas that, on careful reflection, might not seem all that helpful. If you are unhappy with America’s culture of political contempt; if the present public-health crisis has forced you to reexamine your attachments; if you are less than bullish on the world we are building for our children and grandchildren; then perhaps you might entertain a new way of thinking.

And, really, shifting your thoughts needn’t be painful or violent. There’s a soothing, gentle way forward, courtesy of the still, small voice of a simple Buddhist monk.