Awakening From The Trance Of Unworthiness

The craft’s April 25 flight was conducted at speeds and distances beyond what had ever been previously demonstrated, even in testing on Earth… 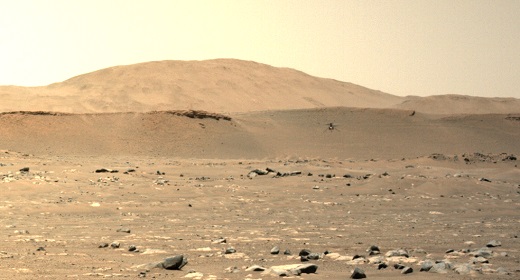 After data came back from Mars starting at 10:16 a.m. EDT (7:16 a.m. PDT), Ingenuity’s team at NASA’s Jet Propulsion Laboratory in Southern California was ecstatic to see the helicopter soaring out of view. They’re already digging through a trove of information gathered during this third flight that will inform not just additional Ingenuity flights but possible Mars rotorcraft in the future.

“Today’s flight was what we planned for, and yet it was nothing short of amazing,” said Dave Lavery, the project’s program executive for Ingenuity Mars Helicopter at NASA Headquarters in Washington. “With this flight, we are demonstrating critical capabilities that will enable the addition of an aerial dimension to future Mars missions.”

The Mastcam-Z imager aboard NASA’s Perseverance Mars rover, which is parked at “Van Zyl Overlook” and serving as a communications base station, captured video of Ingenuity. In the days ahead, segments of that video will be sent back to Earth showing most of the helicopter’s 80-second journey across its flight zone.

The Ingenuity team has been pushing the helicopter’s limits by adding instructions to capture more photos of its own – including from the color camera, which captured its first images on Flight Two. As with everything else about these flights, the additional steps are meant to provide insights that could be used by future aerial missions.

he helicopter’s black-and-white navigation camera, meanwhile, tracks surface features below, and this flight put the onboard processing of these images to the test. Ingenuity’s flight computer, which autonomously flies the craft based on instructions sent up hours before data is received back on Earth, utilizes the same resources as the cameras. Over greater distances, more images are taken. If Ingenuity flies too fast, the flight algorithm can’t track surface features.

“This is the first time we’ve seen the algorithm for the camera running over a long distance,” said MiMi Aung, the helicopter’s project manager at JPL. “You can’t do this inside a test chamber.”

Vacuum chambers at JPL are filled with wispy air, primarily carbon dioxide, to simulate the thin Martian atmosphere; they don’t have room for even a tiny helicopter to move more than about 1.6 feet (half a meter) in any direction. That posed a challenge: Would the camera track the ground as designed while moving at higher speed on the Red Planet?

Get the Latest JPL News

Lots of things have to go just right for the camera to do that, said Gerik Kubiak, a JPL software engineer. Aside from focusing on the algorithm that tracks surface features, the team needs the correct image exposures: Dust can obscure the images and interfere with camera performance. And the software must perform consistently.

“When you’re in the test chamber, you have an emergency land button right there and all these safety features,” Kubiak said. “We have done all we can to prepare Ingenuity to fly free without these features.”

With this third flight in the history books, the Ingenuity Mars Helicopter team is looking ahead to planning its fourth flight in a few days’ time.