What Octopus Dreams Tell Us About the Evolution Of Sleep

by Sara Harrison: Understanding how other animals dream could help us figure out why it’s so important to the human brain, and why it may have been preserved throughout history… 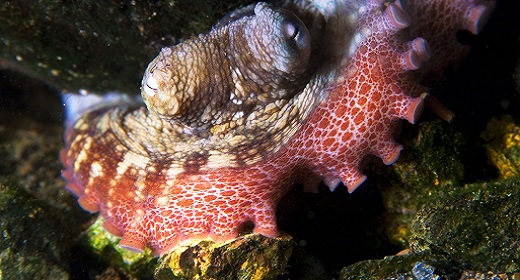 FRUIT FLIES, OCTOPUSES, birds, and humans don’t seem to have much in common. Some live on land, others are aquatic. Some fly, while others are earthbound. Some are vertebrates, others lack backbones. These creatures evolved separately and their common ancestors are far, far back in the evolutionary chain. But they may share one fundamental feature: They dream.

Nearly all creatures sleep, though there’s some debate as to whether single-celled organisms like paramecium do. But no one really knows why. For years, researchers have bandied about theories that sleep helps with memory, growth, and learning—and it’s clear that humans need sleep to function properly—but there’s little else that’s well understood. “Sleep is this big black box,” says Marcos Frank, a neuroscientist at Washington State University. Frank likens sleep to a mysterious organ: It’s clear that it exists and is vital to animals’ health, but it’s exact function and the mechanisms that control it are still unknown.

It’s even more mystifying that some species appear to have only one sleep state, during which their brains are relatively quiet, while others seem to experience two kinds, a quiet phase and an active state. In humans, the period when the brain lights up with activity is called Rapid Eye Movement (REM) sleep. It’s when we dream and when we are the most difficult to wake up.

For a long time, scientists hadn’t observed this deeper, active sleep phase in amphibians or reptiles. So until recently, the theory was that it evolved later in history, via an ancestor shared by birds and animals. But in 2016 active sleep was recorded in lizards. Then in 2019, the state was described in cuttlefish, and this March, a team of scientists in Brazil published a paper in iScience identifying it in octopuses. Cephalopods like these evolved eons before the rise of creatures that would have shared a lineage with both birds and humans. “There’s no way there’s a common ancestor there,” says Frank. Now scientists are wondering if this sleep state is more common than they initially realized, or if it developed in different species at different times, the way wings and flight arose separately in insects, bats, and birds, a phenomenon called convergent evolution.

Understanding which selective pressures caused this adaptation and the preservation of the genes that code for it could help scientists understand what function dreaming serves for the central nervous system and why sleep is important at all. “What is sleep doing for animals?” asks Sidarta Ribeiro, a coauthor on the paper and the director of the Brain Institute at the Federal University of Rio Grande do Norte.

The first step in studying how animals sleep is to figure out when they are, in fact, asleep. This is more complicated than it sounds. “Imagine you were on Mars and you found an organism,” says Frank. “How would you know if it were asleep or not?”

For mammals, scientists might implant electrodes in their brains to track how their neurons are firing. But octopuses have a highly distributed central nervous system. Instead of concentrating control of their nervous system in one brain, they have eight ganglia in their arms that often act independently.

Rather than using an invasive method like attaching probes to determine the octopuses’ sleep states, scientists at Ribeiro’s institute studied a few of their behavioral characteristics. Sylvia Medeiros, a graduate student and the lead author on the study, tested the animals’ arousal thresholds. Three of the lab’s four octopuses were given a visual stimulus—a video of moving crabs. One got a vibratory stimulus, in a form of a light tapping on its tank. Medeiros wanted to see how quickly they responded to stimuli when they were awake. Then she tested them when they seemed inactive, and measured their response rates. Slower reactions meant they were more deeply asleep.

The team also trained cameras on the slumbering animals to observe changes in the patterns on their skin, which offer clues about their brain activity. When they’re awake, octopuses change color during courtship, when they’re fighting over territory, and when they’re hiding from predators. Those changes are always in response to what’s going on around them. But, says Medeiros, “What we observed with sleep is that this changing color is not related to what is happening in the same moment in the environment.” Instead, the octopuses were changing into fantastical patterns that had nothing to do with real world stimuli, like the proximity of other creatures or a need to camouflage themselves. Because motor neurons in the brain control those skin pattern changes, Medeiros says it’s possible that these patterns were emerging because the octopuses were dreaming.

For example, the team’s paper describes a brief state called “quiet half and half,” when the octopuses exhibited a striking pattern in which one half of the animal is completely white, and the other completely black. This pattern normally appears during courtship or turf fights. Since it was obvious that the sleeping animals weren’t engaging in those activities, the researchers wondered if they were dreaming about these scenarios and broadcasting the dreams on their skin. But the team has a caveat: The octopuses also aren’t in their deepest sleep at this point, so it’s possible this could represent a gradient of drowsiness as the animals fall asleep.

Even though the team’s study only included four octopuses, which might seem like a small sample size, this is normal for this kind of study, says Teresa Iglesias, an animal behavior scientist at the Okinawa Institute for Science and Technology who was the lead author on the 2019 cuttlefish study. She says that the results are robust because the behaviors were so strong and consistent: Three of the octopuses had similarly delayed reaction times depending on how awake they were. (One octopus was excluded from the arousal test results for technical reasons.) All four changed skin color during active sleep.

Igelsias says that there is “stronger and stronger evidence” to suggest that cephalopods do indeed dream. When she did her cuttlefish experiment two years ago, Iglesias struggled to figure out when the animals were fully asleep. Their arousal thresholds weren’t consistent. After weeks of recording them, she decided to sit down with the videotape to figure out other indicators that might give her a clue. That’s when she noticed that their skin patterns changed. Just like the octopuses, those patterns didn’t match up with anything happening in the animals’ external surroundings. “What we’re seeing is neural activity on the skin,” she says.

Recording this behavior is the first step to understanding it, but Iglesias warns that these descriptions are not the same as knowing what the animal is perceiving. Once you get beyond the quantitative observations, she says, “then comes the harder part of asking questions. What are they thinking? What are they feeling? What are they experiencing? That’s a big leap.”

What dreaming is like for cephalopods might not be quite what humans experience. The Brazilian team found that the active sleep phase for octopuses was less than a minute long, lightning fast compared to the hour humans can spend in REM sleep. A longer REM cycle gives human dreams complex and twisting plots full of characters and symbolism. If octopuses do dream, Medeiros says they are most likely very short, something she compares to a video clip or a GIF. Iglesias says cuttlefish dreams may be even shorter.

Even though an active sleep state is short, it can be dangerous. Animals are vulnerable when they’re deeply asleep. They might not hear the approach of a predator and, in the case of the octopus, sleep can blow their cover, since their skin may be reacting to what they’re dreaming about, instead of camouflaging them to match their environment.

To indulge in such a dangerous behavior means there must be some kind of evolutionary advantage, researchers think. Ribeiro speculates that active sleep could be a time when different regions of the brain communicate to strengthen neural connections based on what the animal has experienced or learned that day and to move memories from short to long-term storage. He notes that birds have been shown to rehearse their songs during active sleep. “Maybe the pressure for REM sleep is the pressure for memory processing across brain regions,” says Ribeiro. “Animals who have complex brains with many parts would need that.” He points out that even the fruit fly, which shows signs of active sleep, has a small brain but one with many parts that may need to communicate. Just like humans, mice, and birds, fruit flies experience a sleep cycle when their brains are very active—almost as active as when they are awake—but they are still unresponsive to visual stimuli and very much asleep.

It’s also possible that, unbeknownst to us, many more kinds of animals dream. Iglesias points out that humans look for active sleep that resembles our own, featuring behaviors like rapid eye movement and decreased arousal thresholds. But just because they don’t have the same behaviors doesn’t mean animals might not be experiencing a similar sleep stage—we just don’t know what to look for yet.

Medeiros and Ribeiro are already planning new studies that will test whether sleep helps octopuses retain information and learn new tasks, and whether depriving them of slumber one night will make them want to sleep more the next. That information could help them understand whether octopus sleep is similar to our own or if it’s serving a different function. But we may never truly know if octopuses, fruit flies, and birds dream, or what they dream about. “There’s one organism that we can definitively say dreams,” says Frank. “That’s humans. Because they tell you.”