by Jaya Saxena: Your customized order with eight additional ingredients will always be safe at the ‘bucks… 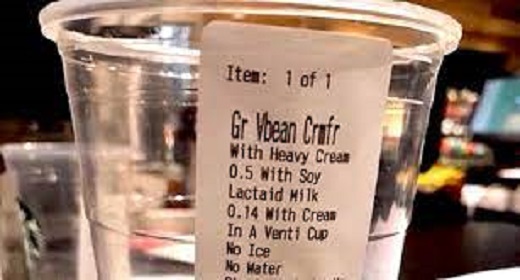 I like to think that when Jurassic Park’s Dr. Ian Malcolm wondered aloud about scientists being so preoccupied with what they “could” do that they never stopped to think what they “should” do, he was really talking about over-the-top Starbucks orders. Because nobody could have come up with some of these more elaborate of these drinks without years of semi-scientific and misguided experimentation.

In a now deleted tweet, a self-identified Starbucks barista, @projectjosiee, posted a photo of a drink he supposedly had to make at work. It was a venti Caramel Ribbon Crunch Frappuccino with a whopping 13 extra additions, including extra ice, five “banana,” and seven pumps of dark caramel sauce. He’s also been posting on TikTok about the drink going viral.

However, instead of discouraging people from making their barista’s lives a living hell, the tweet has inspired more people to order this exact drink, now dubbed the “Edward” for the name of its assumed inventor.

Our store has just been cursed a few minutes ago – I had the privilege of taking the order (thankfully not the privilege of MAKING it!)@ProjectJosiee , you have unleashed a torrent of Edwards upon the land! XD

Some have pointed out that ordering through the app encourages customers to go wild since no one has to face the shame of saying “please make sure it’s seven pumps of the dark caramel sauce, not six, because I am a special little boy who needs his seven pumps” to someone else’s face. But according to other Starbucks workers, there are plenty of customers who have no problem being this high maintenance in person.

Of course tweets like these spark discourse over the nature of service work and what’s reasonable to order and expect. On one hand, you have people who say if they want to pay $15 for a drink with twenty extra additions, all of which are readily available and on offer at Starbucks, they should be able to do so. On the other, people note how off-menu-to-the-point-that-you’re-just-inventing-something drinks are a lot of extra work and time for those performing an already demanding job, and that these time-consuming orders are an inconvenience to other customers, as well.

Starbucks has sided with the former, saying that customized drinks is part of the Starbucks appeal. In a statement to Fox News, the company said, “Customizing beverages at Starbucks and our baristas’ expertise in helping customers find and craft the right beverage has and always will be the heart of the Starbucks Experience. There are many ways for customers to modify their favorite beverage at Starbucks and most customizations are reasonable requests from customers.” They stop short of whether saying what an unreasonable request might look like, but apparently the Edward isn’t it.

But mostly, I want to know how many times Edward had to order this particular beverage until he landed on this combination of 13 additions. Was four banana too little, and six banana too much banana? Why was single blended not enough? Isn’t the single pump of honey completely overwhelmed by…everything else? What is the sugar crash like?? I love academics.