by Jordan Bates: A few months ago, we shared 7 illuminating Zen stories to nudge you toward a lighter state of being. And now we’ve returned with 7 more of the cryptic little tales… 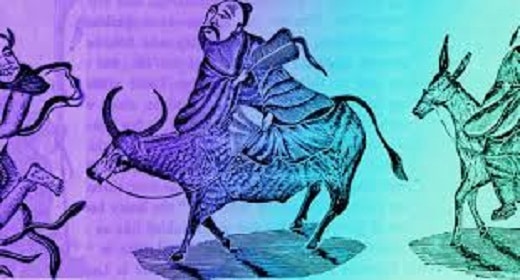 Remember: Zen stories are the ancient words and deeds of Zen masters, which have been passed through the ages, crossing the dynasties and cultures of forgotten peoples, originating with the Buddha himself.

The stories tend to be humorous, paradoxical, multi-layered, enigmatic, and written in a kind of rascally spirit. They’re tantalizing riddles that are sure to puzzle and captivate most anyone.

Practicing Zen can help us to discover greater serenity and equanimity, perceive the simple wonders of our day-to-day lives, embrace the ceaseless ebb and flow of mental states, and gain a distinct tendency to never take life all that seriously.

Savor these 7 parables that point to a wiser, more liberated existence.

When Bankei was preaching at Ryumon temple, a Shinshu priest, who believed in salvation through repetition of the name of the Buddha of Love, was jealous of his large audience and wanted to debate with him.

Bankei was in the midst of a talk when the priest appeared, but the fellow made such a disturbance that Bankei stopped his discourse and asked about the noise. “The founder of our sect,” boasted the priest, “had such miraculous powers that he held a brush in his hand on one bank of the river, his attendant held up a paper on the other bank, and the teacher wrote the holy name of Amida through the air. Can you do such a wonderful thing?”

Bankei replied lightly: “Perhaps your fox can perform that trick, but that is not the manner of Zen. My miracle is that when I feel hungry I eat, and when I feel thirsty I drink.”

National Teacher Daito Kokushi, whose honorific name means “Great Lamp. Teacher of the Nation,” was one of the founders of the renowned O-To-Kan school of Rinzai Zen. He died in the fourteenth century.

According to the custom of ancient Zen Schools, Daito disappeared from the monastery after his enlightenment, to mature his realization hidden in the midst of the world. It was not until years later that he was discovered living under a bridge in Kyoto, in the society of homeless beggars. From there he became a teacher of the emperor.

Daito once wrote a poem about his life as an outcast:

When one sits in meditation,
one sees the people coming and going
over the avenue bridge as trees
growing deep in the mountains.

Zen Story #3: The Most Valuable Thing in the World

Sozan, a Chinese Zen master, was asked by a student: “What is the most valuable thing in the world?”

The master replied: “The head of a dead cat.”

“Why is the head of a dead cat the most valuable thing in the world?” inquired the student.

Sozan replied: “Because no one can name its price.”

“The boat is coming to take me home because I have failed in my studies here at the monastery,” said the boy to his teacher.

“What can I say to my family?”

“Say that you did your best and that is as much as anyone can do,” answered the teacher.

“But I wanted to be a famous monk and teach others.”

“Live from your heart. I will show you. Do you see that boat making its way across the lake with the sun setting behind it?”

“Do you see its wake spreading across the lake? See how the boat looks like the apex of a golden triangle as the wake fans out from its bow.”

“That boat is you as you leave the monastery. The lake is your life. The wake is the effect that you will have on the world. Each ripple triggers another ripple, which triggers another. By constantly striving to live as wise and loving of a life as you can, you can teach the path of love to everyone you meet simply by being yourself; a few of these people will pass on your good example to others. Thus the expanding golden wake of good works begets other good works. Most important, notice how each ripple catches the sun and bounces its light back to heaven…”

“Would you come home with me and explain all of this to my father?” asked the boy.

Zen Story #5: This is Egotism

The Prime Minister of the Tang Dynasty was a national hero for his success as both a statesman and military leader. But despite his fame, power, and wealth, he considered himself a humble and devout Buddhist.

Often he visited his favorite Zen master to study under him, and they seemed to get along very well. The fact that he was prime minister apparently had no effect on their relationship, which seemed to be simply one of a revered master and respectful student.

One day, during his usual visit, the Prime Minister asked the master, “Your Reverence, what is egotism according to Buddhism?”

The master’s face turned red, and in a very condescending and insulting tone of voice, he shot back, “What kind of stupid question is that!?”

This unexpected response so shocked the Prime Minister that he became sullen and angry. The Zen master then smiled and said, “THIS, Your Excellency, is egotism.”

Word spread across the countryside about the wise Holy Man who lived in a small house atop the mountain. A man from the village decided to make the long and difficult journey to visit him.

When he arrived at the house, he saw an old servant inside who greeting him at the door. “I would like to see the wise Holy Man,” he said to the servant. The servant smiled and led him inside. As they walked through the house, the man from the village looked eagerly around the house, anticipating his encounter with the Holy Man.

Before he knew it, he had been led to the back door and escorted outside. He stopped and turned to the servant, “But I want to see the Holy Man!”

“You already have,” said the old man. “Everyone you may meet in life, even if they appear plain and insignificant… see each of them as a wise Holy Man. If you do this, then whatever problem you brought here today will be solved.”

Notere Bisera journeyed to see the sage Ishu at his remote hermitage in the mountains.

Upon arriving, he said to Ishu, “I seek enlightenment.”

Ishu nodded and reached out his hand, saying “Pull my finger.”

Notere raised an eyebrow, but went ahead and pulled his finger.