Why Are People Nostalgic for Early-Pandemic Life?

by Morgan Ome and Christian Paz: Pandemic fatigue is fueling a bizarre sense of longing…. 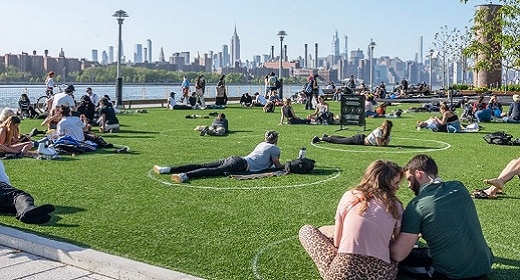 t’s easy to forget about the toilet-paper shortages, the empty streets, and the disinfected groceries. The first days, weeks even, of the pandemic felt like a twisted novelty. You could try out a TikTok trend: whipping together sugar, instant coffee, and a little bit of warm water, then laying that fluffy meringue over milk—dalgona coffee. In the fridge, your sourdough starter looked mushy and gassy. Later, you’d go for a socially distanced walk, but for now you’d make some progress on that loan you owed Tom Nook in the Animal Crossing universe. You didn’t know what a variant was. You’d never heard of a “Fauci ouchie.” And you thought you would probably return to school or your office in a couple of weeks. This was March 2020.

Deep in the throes of the late-stage pandemic, millions of young people have grown to miss this time early last year. Their longing is captured in TikToks and YouTube videos that romanticize the trends, obsessions, and sounds of 18 months ago. These “early-pandemic aesthetic” creators have built an online community tied together by a yearning for a time when the world seemed united in facing an uncertain future.

James Ikin, a 25-year-old in London, jumped onto the pandemic-nostalgia TikTok trend last October, using a soundtrack that mashed together the most viral songs from quarantine, including “Say So,” the disco-infused pop track from the L.A. rapper and singer Doja Cat. (The video has more than 3 million views, and a similar video he made in February has more than 450,000.) “Back then it was just pure and simple,” Ikin told us. “You’re locked down, and this is what life is going to bThe genre of videos that Ikin and other young TikTok creators fueled cropped up in the summer and winter of 2020, when people dreaded the fact that the temporary emergency might drag on indefinitely. More people hopped on the trend in March, a year after the first shutdowns. Even now, new videos continue to trickle out as students and young professionals return to the classroom and office.

Sophie Feldman, a 22-year-old college student from Chicago, remembers scrolling through TikTok one day in August 2020 and catching the first few notes of Benee’s “Supalonely.” “It showed up on my ‘For You’ page [the continuous feed of videos at the heart of the app], and it just immediately brought back all of those memories,” she told us. Lying in bed, she turned on her camera and recorded what became one of the most popular videos of the genre: While a camera filter cycles through red, violet, cyan, and yellow flashes of light, Feldman rolls her eyes and stares into the distance, blinking blankly. Referencing the evocative power of a single song, a caption above her head reads, “This sound screams whipped coffee, forced family walks, toilet paper shortage, banana bread, and tiger king.”

“It just sounds like a fever dream, like time isn’t real,” Feldman said. The cultural moments she calls out in her video felt like distant memories, but they had started just a few months before. Apparently more than 1 million other TikTok users felt the same sense of wistfulness (the clip has more than 4 million views and more than 1 million likes). “Ahh the hopeful part of quarantine” and “Why do i kinda miss it,” read the top replies. Scanning the comments, Feldman saw note after note of melancholy. “We were just feeling nostalgic for this period of time where we felt such togetherness, even though we were physically isolated,” she said. “And I feel like that has dissipated over the past year and a half.”

Why do these videos resonate? According to David Newman, a researcher at UC San Francisco, nostalgia is a natural response to uncertainty and dissatisfaction. At its root, the word breaks down into the Greek nostos (“return home”) and algos (“pain”). In Newman’s studies on nostalgia, he has found that on a day-to-day basis, most people feel nostalgic when they’re also feeling lonely or isolated. Whether because of the return of masks, electoral turmoil, or the recent Delta surge, people may be longing for a time when the gravity of the situation hadn’t fully set in. As time passes, we may forget negative memories and hold on to the positive ones, Newman and other psychology experts told us.

The pandemic’s historical significance may also have fostered a specific kind of nostalgia: anticipatory nostalgia, or the feeling of missing the present before it has even passed. Most people are acutely aware that they will remember the pandemic for years to come, and are perhaps living and documenting their days with that perspective in mind. Social media certainly encourages this kind of premature yearning—or at least a sense that the current moment needs to be captured for posterity. In the Netflix special Inside, the comedian Bo Burnham chronicles his own downward spiral throughout 2020, compiling and synthesizing moments of loneliness, mania, and introspection into a portrait of pandemic life. Inside is contradictory to pandemic-nostalgia TikToks in that it doesn’t romanticize the past year, but the artistic intent is similar. In a 2018 interview, Burnham described the way that social media shapes young people’s conception of their own memories by encouraging “living an experience but at the same time hovering behind yourself and watching yourself live that experience, being nostalgic for moments that haven’t happened yet, planning your future to look back on it.”

The responses to pandemic-nostalgia videos, though, show occasional criticism mixed in with agreement: For every batch of commenters reminiscing about the early pandemic, someone is angry that they are glamorizing the spread of a deadly disease. (Vox’s Rebecca Jennings has challenged the solipsism of some videos, writing that “this brand of perverse nostalgia for quarantined life is both myopic and dishonest,” even though a degree of ironic trolling underlies most of TikTok.) Parents, essential workers, and medical professionals did not have the privilege of a restful early pandemic, and class and race dynamics played a role in who had the time or mental energy to sit around at home growing scallions and watching Tiger King.

Amanda Gordon, a YouTuber and senior at NYU who made a series of videos subtly pushing back on the pandemic-nostalgia trend, is surprised that people genuinely miss March and April 2020. “I wouldn’t say I was miserable,” she told us. “I feel like I honestly try to be an optimistic person.” But her circumstances at the beginning of the pandemic were less than ideal. NYU’s campus shut down and she had to move back in with her family in upstate New York. Her summer internship fell through. She began to question job prospects in the film industry. While logging on to Zoom classes, she worried whether an online education was worth the thousands of dollars she was racking up in student debt.

This was a period not of rest and relaxation, but of questioning whether her present and future would be worthwhile. Gordon spent hours brainstorming video ideas and ways to grow and monetize her YouTube channel (she now has more than 200,000 subscribers). She applied for a scholarship and got a job at her local grocery store so she could work toward paying off student loans. In a video titled “My Life Is Not a Movie,” Gordon attempts to depict her daily routine without an aesthetic sheen, in contrast with the “day in my life” videos that celebrate the mundane. This isn’t to say that Gordon completely rejects videos that glamorize life—she’s played around with harnessing her own “main-character energy” and trying to capture the cottagecore aesthetic.

Emotional and existential stressors can end up generating positive memories and motivations in the future, says Andrew Abeyta, a psychology professor at Rutgers University at Camden who studies nostalgia and memory formation. In fact, nostalgia can help people process traumatic experiences in a healthy way. “Reminiscing about good things and bad things that came out of the pandemic, for some people, is their way of sort of making sense of and growing from the experience,” Abeyta told us. Though not as grave as deaths, the losses many young people experienced in the past year and a half have generated their own kind of latent grief. A generation of young people has missed important milestones: graduations, moves to college or new cities, 21st birthdays, first jobs. Traditional markers of adulthood were replaced with days at home, under the eye of family and in childhood bedrooms.

As much as the people we spoke with may miss the suspended animation of those early days, they’re also worried about the even more uncertain fall and winter. Some have returned to in-person classes or work, but don’t expect it to last and dread the idea of going remote again. Others are still working from home, and can’t stand it. In that context, pandemic nostalgia is an understandable reaction to pandemic fatigue, and as the coronavirus moves toward eventually becoming endemic, it seems like the early days of quarantine won’t easily fade into the recesses of society’s memories. For many Americans, March 2020 will become a shared reference point; they already remember where they were when professional sports went on hiatus, when Broadway shut down, when they were told they’d have to go home.

Looking for a space to process their feelings of loss and grief, young people go where they often do: the internet. There, memories of early-pandemic life can end up serving not only as a way to feel connected to others, but also as a way to cope with that sadness. The guilt that comes with pandemic nostalgia is a consequence of people trying to glean value from a generally terrible time. And while nostalgia may be an effective crutch for the time being, it alone may not lead to the meaningful, lasting healing that people crave.