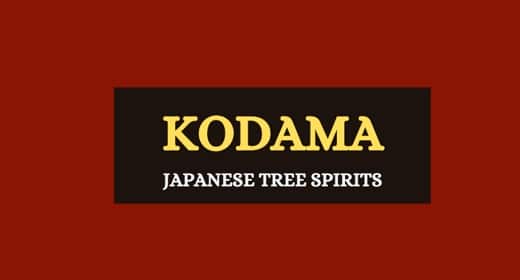 They can be both a blessing or a curse to people, depending on how they’ve been treated. Cutting down trees that house kodamas can bring misfortune whereas protecting such trees and treating them with respect can bring blessings. This belief has played a major role in how the Japanese protect their forests, harvest their timber and treat their trees.

Who are the Kodama?

The yokai spirits and kami gods of Shintoism are known to often interact with people. Whether it’s to help or to torment humans, most of these mystical Shinto beings are said to have accompanied humankind since its very inception. However, the kodama are somewhat different.

Known as tree spirits, the kodama yokai are best described as the animated souls of the most ancient trees in Japanese forests. Each individual kodama is connected to its tree and usually lives in it but can also travel around the forest.

The kodama reside in the deepest nooks of the oldest forests and rarely allow themselves to be seen by people. The few who claim to have seen a kodama describe these yokai as small, flying balls of light or wisps. Some also say that within the ball of light there’s a little humanoid figure like a tree fairy.

More often than not, however, people can just hear the kodama as the prolonged groans of old forests, lingering in the air. These noises are usually interpreted as the death of a kodama and its tree, or as a prophecy of an upcoming tragedy. Sometimes, the noises simply indicate the continued work of the kodama yokai whose main charge is to tend to their forests.

The kodama move around the mountains as they wish. They can sometimes shapeshift, and can appear as animals, humans and lights. One myth tells the story of a kodama that fell in love with a human and so transformed itself into a human also.

The Kodama and Its Tree

While a kodama yokai will take care of its entire forest and make sure that all trees there are healthy, every spirit is still connected to one tree in particular.

Usually, that’s the oldest tree in the grove and it’s that tree that gave birth to the kodama in the first place. Presumably, a tree must grow very old for its soul to transform into a kodama but it’s not certain whether the required age is several decades, several centuries, or several millennia. Whatever the case, the kodama and its tree remain intrinsically linked – if one is hurt or dies, the other can’t live on, and vice versa.

Japanese Woodcutters and the Kodama Spirits

The islands of Japan are covered with trees, and woodcutting has always been one of the main crafts and trades in the country. So, naturally, the people of Japan developed a deep reverence for the forests and their spirits. This love goes far beyond the traditional Japanese bonsai mini-trees.

Because the Shinto woodcutters of Japan believed in the kodama yokai, they were very careful with the trees they were cutting. Before trying to cut down or even trim a tree, the woodcutter would first make a small incision into the base of the tree to see if it “bleeds”. A tree that bled was said to be a kodama tree and wasn’t to be touched.

It’s not entirely clear how a kodama tree bleeds – whether it’s gum, some sort of spirit leakage, or actual blood. Nevertheless, this does show how mindful the Japanese woodcutters were and still are toward their forests.

Japanese Woodcutting Techniques Such As Daisugi

All this is further emphasized by the many different and unique techniques for acquiring lumber that the people of Japan have developed over the years. One prime example of that is the daisugi technique – a special wood-trimming technique that’s similar to bonsai but is done on large-scale wild trees.

With daisugi, the woodcutter doesn’t cut down the tree but instead gets lumber by just trimming its larger branches. This allows the tree to live on and keep growing new branches which can be trimmed down again in a decade or so.

Not only does this preserve the tree’s life, but it also removes the need for replanting new trees every time. What’s more, just as bonsai is meant to keep the miniature trees growing in a specific manner, daisugi is done in such a way that the tree’s new branches grow stronger and thicker, making for much better lumber. The technique is even done in such a way that a single trunk-like branch often grows from the top of the tree – an ideal source of lumber that doesn’t kill the tree. Rather, it farms and harvests the tree.

Woodcutting techniques like daisugi are a great example of how the reverence and love of the Japanese people for Shinto spirits like the kodama can lead to some extraordinary real-life innovations.

The kodama represent Japan’s ancient forests and their importance for the island nation. Loving and honoring nature is one of the cornerstones of Shintoism and the kodama tree spirits prove that by remaining an integral part of Japanese mythology to this day.

If a kodama was protected and worshipped in the right way, it would provide protection for the houses and villages of the people. In this way, kodamas symbolized protection and prosperity that comes from taking care of the natural resources around you.

Importance of Kodama in Modern Culture

Given their reclusive nature, kodama spirits are rarely seen as active characters in modern Japanese manga and anime – even in the ancient Shinto myths, they’re just not given much personality to work with.

Nevertheless, they can often be seen as background characters in many anime and manga stories. Probably the most famous example are the kodama spirits in the famous Hayao Miyazaki movie Princess Mononoke.

What’s more, kodama yokai have also made their way into western fantasy literature as well, usually shown as forest wisps. A very well-known example is the Warcraft & World of Warcraft video game franchise where the night elf wisps are prominently shown.