By Nick Shay: The Loop Current in the Gulf of Mexico is very warm and has fueled major storms such as Hurricane Katrina. 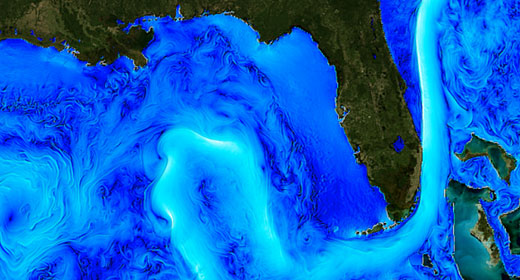 The Atlantic hurricane season starts on June 1, and the Gulf of Mexico is already warmer than average. Even more worrying is a current of warm tropical water that is looping unusually far into the Gulf for this time of year, with the power to turn tropical storms into monster hurricanes.

When the Loop Current reaches this far north this early in the hurricane season – especially during what’s forecast to be a busy season – it can spell disaster for folks along the Northern Gulf Coast, from Texas to Florida.

When a tropical storm passes over the Loop Current or one of its giant eddies – large rotating pools of warm water that spin off from the current – the storm can explode in strength as it draws energy from the warm water.

I have been monitoring ocean heat content for more than 30 years as a marine scientist. The conditions I see in the Gulf in May 2022 are cause for concern. The National Oceanic and Atmospheric Administration is forecasting an above-average Atlantic hurricane season, with 14-21 named storms, six to 10 of them hurricanes. The Loop Current has the potential to supercharge some of those storms.

Why the Loop Current worries forecasters

Warm ocean water doesn’t necessarily mean more tropical storms. But once tropical storms reach waters that are around 78 F (26 C) or warmer, they can strengthen into hurricanes.

Hurricanes draw most of their strength from the top 100 feet (30 meters) of the ocean. Normally, these upper ocean waters mix, allowing warm spots to cool quickly. But the Loop Current’s subtropical water is deeper and warmer, and also saltier, than Gulf common water. These effects inhibit ocean mixing and sea surface cooling, allowing the warm current and its eddies to retain heat to great depths.

The eddy that fueled Hurricane Ida in 2021 was over 86 F (30 C) at the surface and had heat down to about 590 feet (180 meters). With favorable atmospheric conditions, this deep reservoir of heat helped the storm explode almost overnight into a very powerful and dangerous Category 4 hurricane.

Within a storm, warm ocean water can create towering plumes of rising warm, moist air, providing high-octane fuel for hurricanes. Think about what happens when you boil a large pot of spaghetti on the stove and how the steam rises as the water gets hotter. As more moisture and heat rise within a hurricane, the pressure drops. The horizontal pressure difference from the center of the storm to its periphery subsequently causes the wind to speed up and the hurricane to become increasingly dangerous.

Since the Loop Current and its eddies have so much heat, they don’t significantly cool, and the pressure will continue to fall. In 2005, Hurricane Wilma had the lowest central pressure on record in the Atlantic, and Rita and Katrina weren’t far behind.

La Niña, wind shear and other drivers of a busy season

Forecasters have other clues to how the hurricane season might shape up. One is La Niña, the climate opposite of El Niño.

During La Niña, stronger trade winds in the Pacific Ocean bring colder water to the surface, creating conditions that help push the jet stream farther north. That tends to exacerbate drought in the southern U.S. and also weaken wind shearthere. Wind shear involves the change in wind speeds and wind directions with height. Too much wind shear can tear tropical storms apart. But less wind shear, courtesy of La Niña, and more moisture in the atmosphere can mean more hurricanes.

La Niña has been unusually strong in spring 2022, though it’s possible that it could weaken later in the year, allowing more wind shear toward the end of the season. For now, the upper atmosphere is doing little that would stop a hurricane from intensifying.

It’s too soon to tell what will happen with the steering winds that guide tropical storms and affect where they go. Even before then, the conditions over West Africa are crucial to whether tropical storms form at all in the Atlantic. Dust from the Sahara and low humidity can both reduce the likelihood storms will form.

Climate change has a role

As global temperatures rise, the ocean’s temperature is increasing. Much of the heat trapped by greenhouse gases that are released by human activities is stored in the oceans, where it can provide additional fuel for hurricanes.

Studies suggest that the Atlantic is likely to see more storms intensify into major hurricanes as those temperatures rise, though there won’t necessarily be more storms overall. A study examined the 2020 hurricane season – which had a record 30 named storms, 12 of them hitting the U.S. – and found the storms produced more rain than they would have in a world without the effects of human-caused climate change.

Another trend we have been noticing is that the Loop Current’s warm eddies have more heat than we saw 10 to 15 years ago. Whether that’s related to global warming isn’t clear yet, but the impact of a warming trend could be devastating.

This essay is reprinted with permission from

The Conversation, an online publication covering the latest research

This article was updated May 24, 2022, with NOAA’s Atlantic hurricane season forecast.