The Power of Presence, How “Living In The Now” Can Change Your Life

by Allie Stark: Presence is the powerful practice of being in the moment… 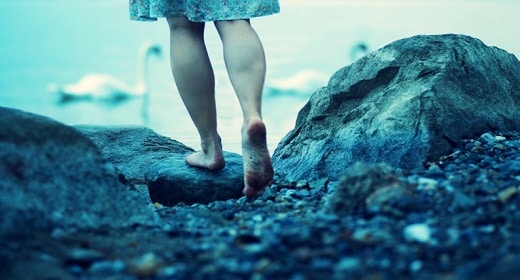 It is created through an acute awareness of one’s thoughts, feelings, and emotions, and in our modern day society, being present doesn’t always come easily. The overstimulation and distraction that come from technology, social media, work, family life, social engagements, and the never-ending “to-do” lists regularly take us out of the now and into a memory from the past or a fear about the future.

Cultivating the power of presence comes from creating the space to observe one’s mind and one’s self. This skill of observation allows us to look at our own lives and the lives of others without attaching judgment or analysis. Using this awareness, we become mindfully attuned to all that is around us through our five senses (smell, touch, taste, sight, and sound) as well as our physical sensations — you know, those signs from our bodies that we often tend to ignore.

Our bodies are equipped with a natural mechanism called the “stress response,” also known as the “fight-or-flight” response, which was first described by Walter Cannon at Harvard. When we encounter something that feels like a threat, the amygdala in the brain experiences the emotion fear. The brain then communicates to the hypothalamus, which communicates to the nervous system, which signals to the adrenal glands to release the stress hormones cortisol, adrenaline, and noradrenaline. This assembly-line-like process of the sympathetic nervous system is a crucial part of our body’s internal self-protection mechanism. The only problem is that we are not physiologically designed to be frightened often.

In today’s world, many of us live in overdrive and operate in a constant state of “flight or flight.” This state can be a result of feeling the fear of imagined threats: financial security, societal achievement, the steadiness or demise of a relationship, a perceived health threat, the loss of a loved one, etc. Operating from this place, it is no wonder that many of us feel the perils of stress and anxiety on a daily basis. We struggle with migraines, digestive issues, difficulty breathing, lack of concentration, fatigue, depression, and innumerable other physical ailments because our body is actually attempting to flee the scene of a real threat (car crash, lion chase, assault, etc.) that simply isn’t there.

The opposite is also true. When we practice deep breathing and mindfulness, we encourage our body to employ the “relaxation response,” our body’s counterbalance to the stress response as defined by Harvard professor Herbert Benson. Being in a state of relaxation, your body will experience physiological symptoms of ease, openness, and balance.

A few days ago, I unintentionally experimented with the topic of presence when I accidentally left my phone at home. Even though I am generally good about creating intentional space to be phone free, something felt different. Normally, I choose to not bring it on a walk, I choose to keep it in my purse during dinner with a friend, and I choose to put it on airplane mode when I am writing or working during the day. Yesterday was the middle of the work week and if I had been asked whether or not I wanted to bring my phone along for the day, my answer would have unquestionably been “yes.”

Climbing up the stairs to the train platform, my hand impulsively reached into my bag in search of my phone. I was subconsciously looking for a meditative distraction during my morning commute. Remembering that it wasn’t there, I closed my eyes, took five deep breaths, and boarded the train car upon its arrival. Within moments of taking my seat, three street performers made an announcement, turned up their boom box, and had at it with their superfly dance moves. I was engrossed and totally present: wide eyes, big smile, heart beating in my chest.

Over the course of the rest of the day, I made note of a few other observations that I could have missed if I was in the phone zone:

Upon noticing each of these observations I felt the tension in my body dissipate, I smiled effortlessly, and my body felt calm and at ease. Being fully involved in the present moment, I didn’t have the time to become entrenched in thoughts about the past or fears about the future. I was simply aware of what was going on in the now.

Now let’s be realistic. I know that we live in a technology-focused era and that our phones and our computers are significant tools for work, connectivity, and enjoyment.

They serve a purpose, and an important one at that. We also live in an age where anxiety disorders are the most common mental illness in the U.S., affecting 40 million adults in the United States age 18 and older, or 18% of the population. Countless studies have begun to explore the effects of mindfulness on reducing anxiety and depression, with many of the results from these studies suggesting that mindfulness-based therapy is a promising intervention for treating anxiety and mood problems in clinical populations. If pills, therapies, and medical advice aren’t curing our ailments, it seems foolish not to give mindfulness a shot.

If nothing else, maybe we will get the opportunity to notice small and simple details throughout the day that put a smile on our face.