by Shagun Rastogi: I wanted to watch the sunrise on the summer solstice from Stonehenge, ancient druid temple, aligned to the solstice, keeper of mysterious magic yet unknown to us…

A picture of Stonehenge had been my desktop screensaver more than 15 years ago, and walking amongst these stones had been a long cherished dream of mine. So when I realized that I could be there on this special day when they allow people to enter the circle and hold and touch the stones, I was overjoyed.

But it doesn’t help when ten thousand other people have the same idea.

I walked into a loud party, and people were celebrating the stones quite literally by being stoned. Or drunk.

I felt so disappointed. Like a temple I had known from long ago was defiled. I snuggled up against one of the stones, the only spot I could find, and just sat there. Despite the crowds, it was easy to tune into the stones. Ten thousand people, and the stones still felt like my closest brethren. I tried to sleep, but couldn’t, so I started to walk around hugging the stones. Since so many others were doing that, it didn’t feel odd.

I had an odd feeling that the stones didn’t mind the people and the party at all.

That feeling enabled me to find a circle of drummers and dance. It was the best thing to do while waiting for the sunrise.

Later, I asked a Druid, one of the few hanging around, when they would do their ceremony. He laughed. “We used to many years ago, on that altar stone, see that one. But now people are dancing on it, so we can’t.” I was surprised at how ok he seemed at the prospect of his altar stone being danced upon.

“Do you not mind? “ I asked him. “Well, I just come to soak up the atmosphere and look at all the people having fun. They are happy”.

I looked around. At individual faces. They did seem happy.Happier than me, for sure. I was all judgement and disappointment. Their hearts were lighter. The Druid had taught me something, shifted my perspective.

As I waited for the sunrise, I suddenly let go of my desire to watch this sacred sunrise. As more and more people thronged in, I started to walk away. Away from the stones.

“The sunrise is that way”, a person I crossed said. “It’s everywhere.” I replied.

In that moment, the sun lit me up, and the stones, and all of the people, doing what the sun does best.Shining on all with equal love, in equal measure, without discrimination.

I found a diary from 2001,when I was seventeen, in which I had written : 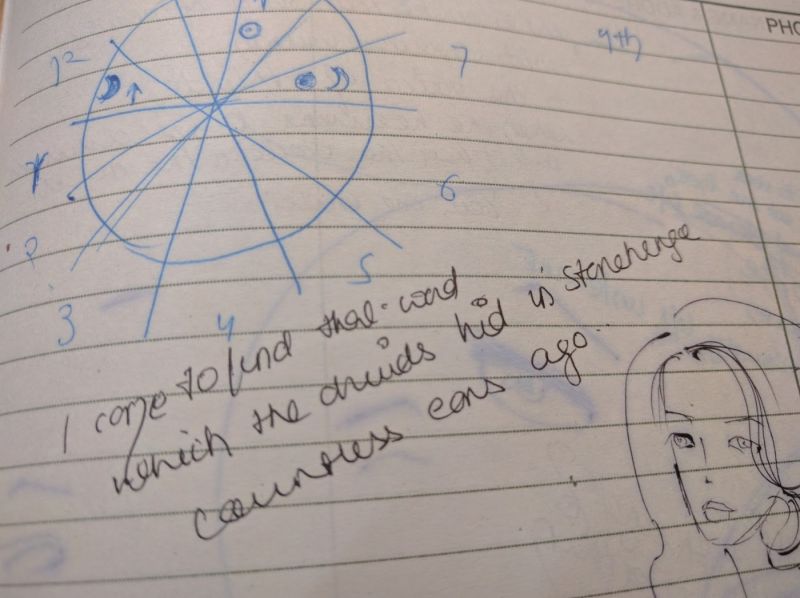 Now, 15 years later, if you ask me what that word was, I’ll tell you that it must have been this — Love. Love, of the kind that doesn’t discriminate, because it can’t. Like the sun.