by Bryan Nelson: The oldest living trees in the world have borne witness to history, survived changing climates and human development… 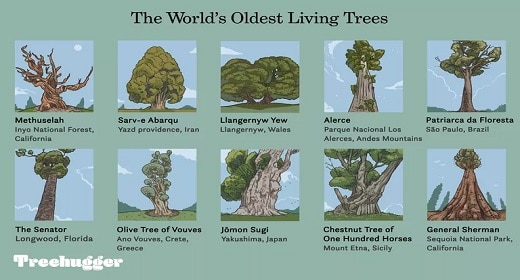 There are colonies of clonal trees that have lived for tens of thousands of years, but there’s something majestic about a single tree able to stand on its own for millennia. These ancient trees have borne witness to the rise and fall of civilizations, survived changing climates, and even persevered through the fervent development of human industry. They are a testament to the long view that Mother Nature takes in tending the Earth. With that in mind, consider these 10 of the world’s oldest living trees. 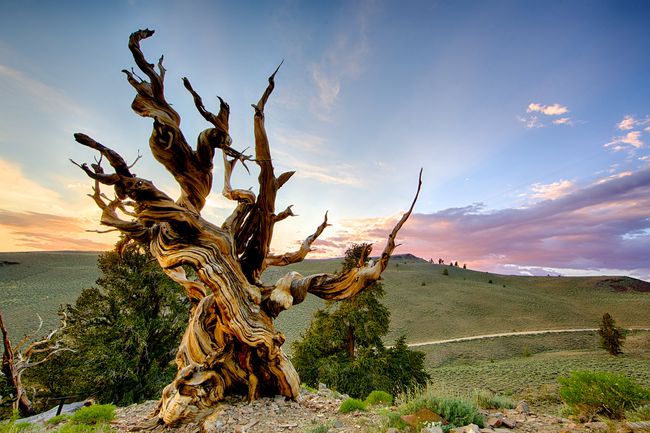 Until 2013, Methuselah, an ancient bristlecone pine was the oldest known non-clonal organism on Earth.1 While Methuselah still stands as of 2016 at the ripe old age of 4,848 in the White Mountains of California, in Inyo National Forest, another bristlecone pine in the area was discovered to be over 5,000 years old. Methuselah and its unnamed senior pine’s exact locations are kept a close secret in order to protect them. You can still visit the grove where Methuselah hides, but you’ll have to guess at which tree it is. Could this one be it? 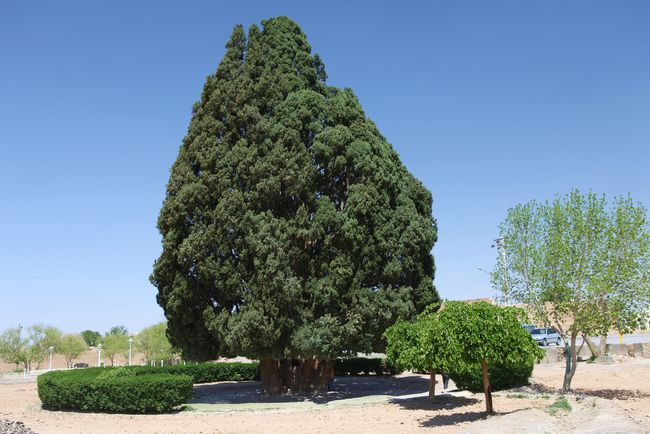 Sarv-e Abarqu, also called the “Zoroastrian Sarv,” is a cypress tree in Yazd province, Iran. The tree is estimated to be at least 4,000 years old and, having lived through the dawn of human civilization not far away, it is considered an Iranian national monument. Many have noted that Sarv-e Abarqu is most likely the oldest living thing in Asia. 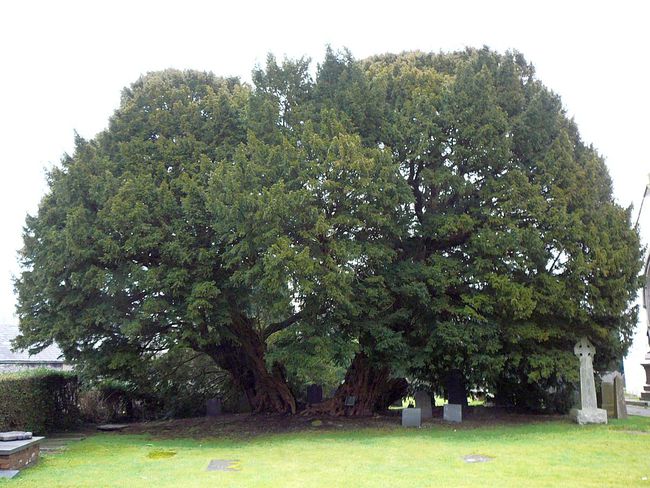 This incredible yew resides in a small churchyard of St. Dygain’s Church in Llangernyw village, North Wales, United Kingdom.2 About 4,000 years old, the Llangernyw Yew was planted sometime in the prehistoric Bronze Age—and it’s still growing! In 2002, in celebration of the golden jubilee of Queen Elizabeth II, the tree was designated as one of 50 Great British trees by the Tree Council. The tree is also rooted in Welsh mythology, as it is linked to a spirit called Angelystor, or the “Recording Angel.” 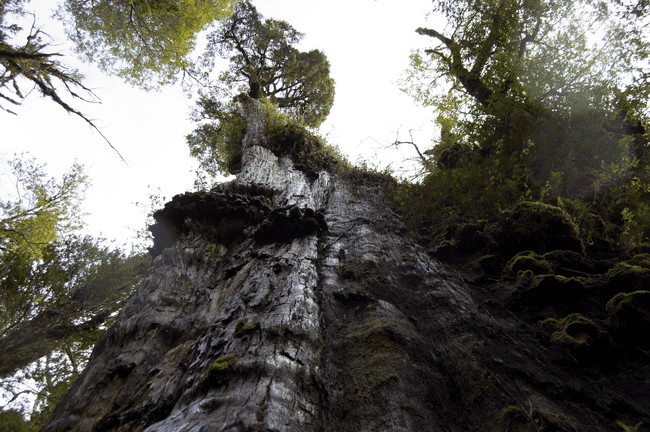 The Alerce is a common name for Fitzroya cupressoides, a towering tree species native to the Andes mountains. There’s almost no telling how old these trees can get, since most of the larger specimens were heavily logged over centuries.3 Many botanists believe they are the second-longest living trees on Earth aside from the bristlecone pine of North America.4 To date, the oldest known living specimen is 3,646 years old and is appropriately called Grand Abuelo. 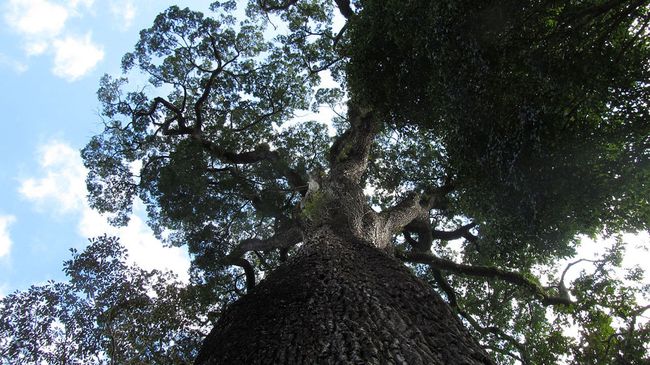 This tree, an example of the species Cariniana legalis named Patriarca da Floresta in Brazil, is estimated to be over 2,000 years old.5 The tree is believed to be sacred, but its species is widely threatened due to forest clearing in Brazil, Colombia, and Venezuela. 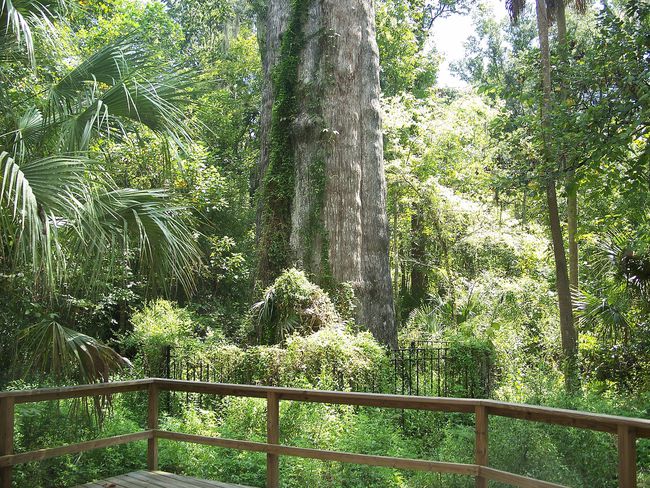 Though the Senator suffered tragedy in 2012 after a fire caused much of the tree to collapse, this iconic tree bears mentioning here. Formerly located in Florida, the Senator was the largest bald cypress tree in the U.S. and was widely considered the oldest of its species known to exist.6 It was also likely the largest U.S. tree of any species east of the Mississippi River. Estimated to have been around 3,500 years old, the Senator was used as a landmark for the Seminole Indians and other native tribes.7 The Senator’s size was particularly impressive because it endured many hurricanes, including one in 1925 which reduced its height by 40 feet.

The tree got its name from Sen. M.O. Overstreet, who donated the tree and surrounding land in 1927. 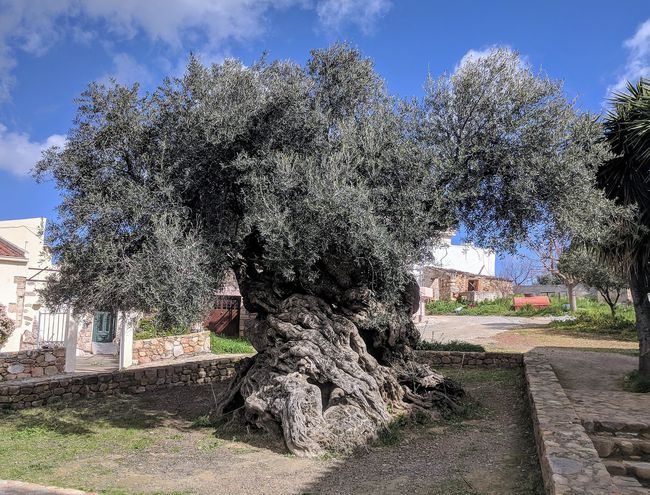 This ancient olive tree is located on the Greek island of Crete and is one of seven olive trees in the Mediterranean believed to be at least 2,000 to 3,000 years old. Although its exact age cannot be verified, the Olive Tree of Vouves might be the oldest among them, estimated at over 3,000 years old. It still produces olives, and they are highly prized. Olive trees are hardy and drought-, disease- and fire-resistant—part of the reason for their longevity and their widespread use in the region. 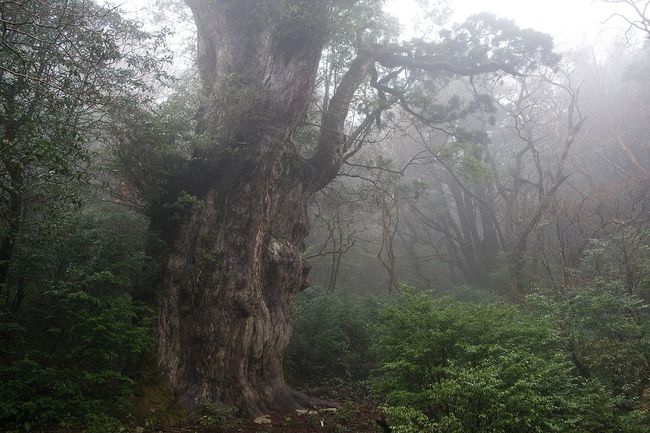 Jōmon Sugi, located in Yakushima, Japan, is the oldest and largest cryptomeria tree on the island and is one of many reasons why the island was named a UNESCO World Heritage Site. The tree dates to at least 2,000 years old, but some experts believe it could be older than 3,000 years old. Under that theory, it’s possible that Jōmon Sugi is the oldest tree in the world—even older than Methuselah and its brethren. Regardless of the numbers, it’s a tree that deserves mention here.

Chestnut Tree of One Hundred Horses 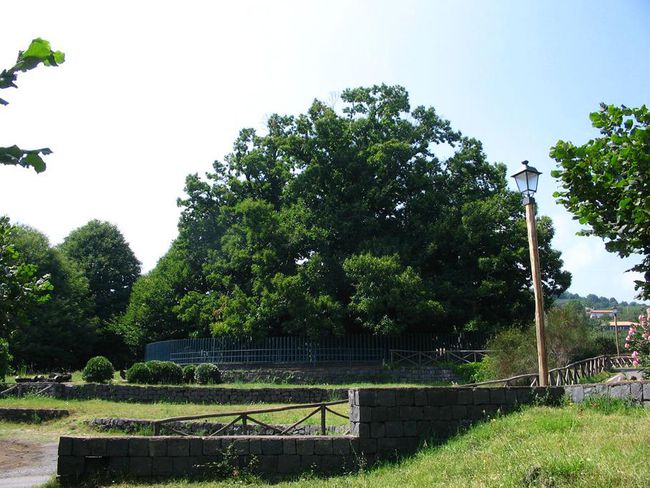 This tree, located on Mount Etna in Sicily, Italy is the largest and oldest known chestnut tree in the world.8 Believed to be between 2,000 and 4,000 years old, this tree’s age is particularly impressive because Mount Etna is one of the most active volcanoes in the world.5 The tree sits only 5 miles from Etna’s crater. The tree’s name originated from a legend in which a company of 100 knights were caught in a severe thunderstorm.9 According to the legend, all of them were able to take shelter under the massive tree. 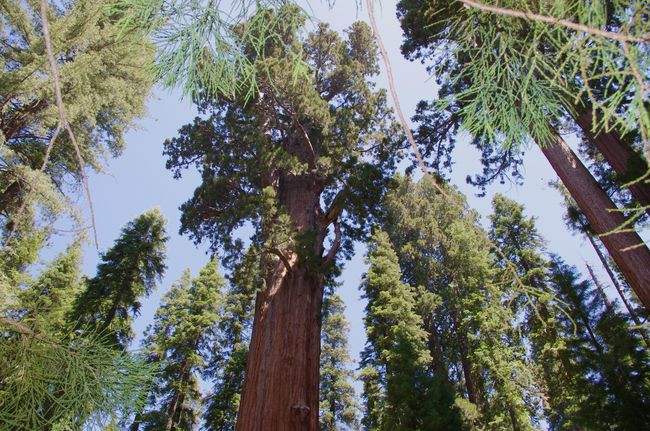 Believed to be around 2,500 years old, General Sherman is the mightiest giant sequoia still standing.10 The volume of its trunk alone makes it the largest non-clonal tree by volume in the world,11 even though the tree’s largest branch broke off in 2006.12 Perhaps this was a sign that General Sherman could not be caged in? Sherman can be found in Sequoia National Park in California, where five of the 10 largest trees in the world exist.