Tesla Is Aiming To Ramp Up To 50,000 Tesla Semi Electric Trucks Per Year

by Fred Lambert: Tesla is aiming to ramp up Tesla Semi production to 50,000 electric trucks per year – as soon as 2024. It would make Tesla one of the largest class 8 truck manufacturers… 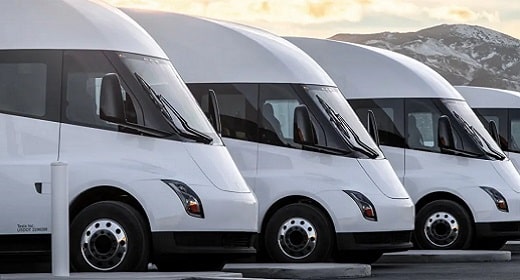 After five years of waiting, Tesla is now finally in early production with the Tesla Semi electric truck.

Electrek exclusively reported that Tesla was building a production line for the Tesla Semi in a new building near Gigafactory Nevada. At the time, we were told that the production equipment installed would be for about five electric trucks per week.

That would be only 250 trucks per year.

However, Tesla always planned to move to higher volume production at Gigafactory Texas.

During the conference call that followed the release of Tesla’s Q3 2022 financial results, CEO Elon Musk announced that Tesla is “tentatively” aiming for 50,000 Tesla Semi electric trucks in 2024:

It takes about a year to ramp up production. So, we’re tentatively aiming for 50,000 units in 2024 for Tesla Semi in North America. And obviously, we’ll expand beyond North America.

Musk didn’t want to communicate the price of the vehicle, but he did say:

And these would sell… I don’t want to say the exact prices, but they’re much more than a passenger vehicle.

Interestingly, Musk also confirmed that Tesla Semi doesn’t use 4680 battery cells. He didn’t confirm which cells it uses, but it is presumably the same 2170 cells found in most Tesla Model 3 and Model Y in production today.

The fact that Tesla doesn’t have to rely on 4680 cells for the Tesla Semi should greatly help with the rapidly increasing production of the electric truck.

This is good news because Tesla Semi could have a massive impact on the transport industry at scale. It will not only reduce emissions throughout the industry, but it also has the potential to greatly reduce the cost of operation per mile.

Reducing the cost of transport per mile has an impact on virtually all products that are transported by trucks, and basically anything you can think that has been in a truck at some point.