This Startup Builds Houses by Pumping Concrete Into Inflatable Forms

By Vanessa Bates Ramirez: Even as 3D printing gains more traction as a next-gen homebuilding method, new ideas for sustainable, affordable housing are continuously popping up… 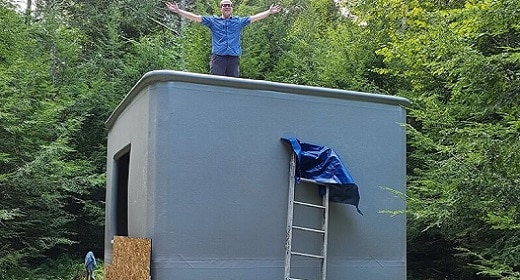 There’s “foldable” homes; homes that ship in kits then are assembled like Ikea furniture; prefab homes are made of structural panels; and soon, if one ambitious company can help it, there will be “inflatable” homes, too.

Automatic Construction’s homes are only inflatable at the beginning of their construction process, to be clear. Perhaps a more accurate description would be “houses built using giant house-shaped balloon walls that get cement pumped into them.” That’s right—it’s sort of like a house-shaped water balloon, hollow for now, but co-founder Alex Bell aims to have reinforcing elements like rebar and tension cables pre-installed inside the forms eventually.

Bell calls his system Inflatable Flexible Factory Formwork (patent pending). Here’s how you get from a balloon to a house. First, the rolled-up form gets delivered to the construction site. Picture one of those full-height air mattresses you can plug in, except bigger, thicker, and heavier (and if you’ve ever lugged a queen-sized one of these around, you know it’s not very light to begin with). The form is made of polyvinyl chloride, or PVC, which is one of the most commonly-used plastics in the world; it’s found in everything from medical devices to utility pipes, flooring, and packaging.

The form gets rolled out on a concrete slab or other foundation, then inflated with an air pump; at this point, it may look a little like one of those bouncy houses you see at children’s parties. Then a ready mix truck shows up—these trucks can mix concrete on their way to a site or at the site itself—and pumps concrete into the form. The company’s website says they can use local ready mix concrete, aircrete (a lightweight version of concrete that incorporates air bubbles instead of traditional aggregate), sustainable cement, and other “pumpable building materials.”

The concrete-pumping step is a bit like 3D printing, though 3D printed homes use concrete as printer “ink” to put walls down layer by layer rather than spitting all the concrete into a form at once. This is even faster; Bell told New Atlas, “For our 100-square-foot and 200-square-foot prototypes, the inflation took 7 to 10 minutes with air. Then the concrete pump filled them in 1.5 hours.”

Once the concrete has dried, the form isn’t stripped away; it stays right where it is, serving as an airtight barrier for waterproofing and insulation. The final step is to add all the things that make a house look and function like a house rather than a giant clay art project, that is, a facade, windows, doors, drywall, HVAC, and plumbing.

Besides being much faster than conventional building methods, Automatic Construction claims its forms bring labor costs down to one-fifth of their typical level, yielding buildings that comply with code and have zero job site waste.

In an interview with BuiltWorlds, a professional network for emerging construction tech, Bell explained that he’s increasingly automating the manufacture of the forms. “Advances in robotics and computer vision allow us to automate more and more of the assembly of these products,” he said.

Will inflatable houses eventually rival 3D printing as a next-gen homebuilding technique? We’ll see; Automatic Construction has only been around for two years, but signs point to a potentially promising future. This past June, the company was one of 5 startups chosen from more than 80 applicants for BuiltWorlds’ inaugural Formwork Labs accelerator cohort. Co-founder Tyler Robins says the company has made contact with “some of the largest construction companies in the world” and is seeing an enthusiastic response from investors.