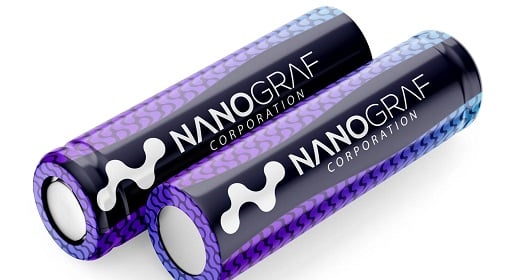 which claims it has enabled the highest energy-density cylindrical 18650 Lithium-ion cell in the world, today announced that its battery has achieved a new industry energy-density milestone of 810 Wh/L (4.0Ah capacity).

Ampere hours (Ah) is the amount of energy charge in a battery that enables 1 ampere of current to flow for one hour.

In 2021, NanoGraf announced it had developed the world’s longest-running 3.8Ah 18650 cylindrical lithium-ion cell, at 800Wh/L, so this latest version reflects an improvement.

NanoGraf says in a statement that “the increased stability and highly scalable nature of [its new] silicon-anode cell solves the pain points of commercial first-generation SiOx anodes, and it is proven to be drop-in ready for existing cell designs and production processes.”

Techopedia explains what a silicon anode battery is:

A silicon anode battery is a type of lithium-ion battery where the anode is replaced by silicon nanotubes or silicon coating. The idea of using a silicon anode in a battery is still under a lot of testing. This has multiple advantages over ordinary lithium or graphite anodes. The silicon enables long life and high energy storage, resulting in a significantly longer lasting battery.

NanoGraf says that its “silicon-anode and 18650 cell represent a step forward in establishing a domestic battery supply chain, a key directive of the Biden administration to build US jobs, alleviate supply chain bottlenecks, and support a nationwide movement toward automotive electrification.”

The Inflation Reduction Act calls for and supports the onshoring of key battery components in the US, and these historic opportunities are providing additional momentum around the adoption of upstream US innovation like NanoGraf’s.

NanoGraf products are important commercial examples of how US innovation can not only raise the bar on lithium-ion performance, but create US jobs and promote national security.

In 2019, the US Council for Automotive Research, a consortium of Ford, General Motors, and Stellantis, provided NanoGraf with $7.5 million for a 36-month electric vehicle battery research and development project.