by Brett Tingley: The Artemis moon program’s first mission is underway. Sometimes the third time really is a charm. 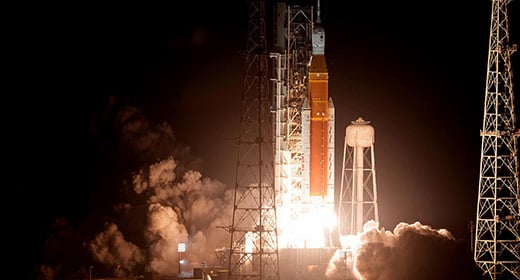 CAPE CANAVERAL, Fla. — NASA’s new era of deep space exploration has begun. With a mighty roar, the most powerful NASA rocket ever built — the Space Launch System (SLS) — soared into the Florida early morning sky on the Artemis 1 mission, a risky and long-delayed test flight to send a next-generation space capsule to the moon and back. Liftoff occurred today (Nov. 16) at 1:47 a.m. EST (0647 GMT) from NASA’s Pad 39B here at Kennedy Space Center (KSC) in Florida.

Artemis 1 is sending NASA’s new Orion spacecraft on an uncrewed test flight around the moon. This shakedown mission, NASA’s first flight of a crew-capable moon ship in nearly 50 years, serves as the proving ground to see if SLS and Orion are ready to help return astronauts to the lunar surface by 2025 under NASA’s Artemis program.

“Liftoff of Artemis 1!” NASA commentator Derrol Nail said during the webcast of this morning’s launch. “We rise together, back to the moon and beyond.”

“This is your moment,” she said. “We are all part of something incredibly special: The first launch of Artemis, the first step in returning our country to the moon and on to Mars. What you have done today will inspire generations to come.”

As in previous attempts, this morning’s try saw its share of setbacks. While the SLS upper stage fueling process was underway roughly three hours prior to launch, an intermittent leak was detected in the liquid hydrogen replenishment valve on Artemis 1’s mobile launch tower. NASA sent a specialized “Red Crew” to the tower to tighten packing nuts to stop the leak, a process that took roughly an hour.

Following that fix, a separate issue with an ethernet switch at a radar site on the U.S. Space Force Eastern Range caused further uncertainty, prompting a “no-go” on the range until a replacement was found. The ethernet issue was fixed while the launch countdown was at the planned T-10 minutes hold.

This was the third launch attempt for Artemis 1. An initial attempt on Aug. 29 was scrubbed due to a glitch in the cooling process that one of the rocket’s four main engines experienced. A second attempt on Sept. 3 was also scrubbed when a hydrogen leak was detected during the rocket’s lengthy fueling process. SLS was then rolled back to KSC’s Vehicle Assembly Building for repairs and to shelter it from Hurricane Ian, which slammed into Florida’s Space Coast in late September.

Most recently, the amended target date of Nov. 12 was delayed to today because of Hurricane Nicole (which was quickly downgraded to a tropical storm following landfall). High winds produced by the storm tore a piece of insulative caulking away from the outside of the Orion spacecraft, prompting Artemis mission teams to study the issue and determine if a Nov. 16 launch was within safety parameters.

Teams here at KSC rapidly assessed the damage in the days following the storm and reached the conclusion that SLS and Orion were still good for this morning’s launch. “I feel good headed into this attempt on the 16th,” Mike Sarafin, Artemis mission manager at NASA headquarters in Washington, said during a press briefing on Sunday evening (Nov. 13).

Jeremy Parsons, deputy manager of NASA’s Exploration Ground Systems program at KSC, said during a teleconference on Monday (Nov. 14) that the work the Artemis mission team has performed in order to get SLS off the ground following the storm has been incredible. “If you were to ask me a couple of weeks ago, would we go through a storm like Hurricane Nicole and then be able to turn around and have cleared the vehicle and be in good shape, I would have said, hey, chances are probably low. But this team has really just been firing on all cylinders,” Parsons said.

Eight minutes after liftoff this morning, the SLS rocket’s upper stage reached orbit with Orion, with the spacecraft starting to unfurl its four solar arrays from its service module shortly thereafter. A spacesuit-clad Snoopy plush toy is aboard to float around in weightlesness along with a Shaun the Sheep doll from NASA’s Orion partner the European Space Agency, which provided the service module.

If all goes well, the SLS upper stage should fire its single engine to raise its orbit just under an hour after launch, then fire up again 98 minutes after liftoff to put Orion on course for the moon. While NASA hopes for success, Artemis 1’s test flight nature means something could always go wrong.

“It is a new creation. It is a new rocket and a new spacecraft,” NASA’s Artemis 1 mission manager Mike Sarafin said before launch. “This is something that has not been done in over 50 years and is incredibly difficult.”

NASA engineers may be on pins and needles for the mission, but Artemis 1 appears to have captured the public’s imagination.

A risky test flight, with science, too

At its core, the Artemis 1 mission aims to show that the SLS rocket and Orion are ready to fly astronauts to the moon as part of a sustained program of lunar exploration that will ultimately enable crewed flights to Mars. NASA wants to use the vehicles to build a Gateway space station around the moon, then send crews there to use it as a home base for trips to the lunar south pole and other unexplored realms.

NASA has said that Artemis 1’s goals are simple, but hard. A big priority is to show that Orion’s heat shield can survive the scorching-hot reentry temperatures (up to 5,000 degrees Fahrenheit, or 2,800 degrees Celsius) caused by returning home from the moon at 25,000 mph (40,000 kph). NASA also wants Orion to demonstrate that it’s ready to keep astronauts alive in lunar orbit. And the agency aims to successfully recover the capsule so it can be studied ahead of Artemis 2, the program’s first crewed flight around the moon, which is slated to fly in 2024.

Orion should reach the moon around Nov. 22, when it will approach within 60 miles (96.6 km) during a flyby toward its final orbit. That path, called a “distant retrograde orbit,” will take Orion on a long, looping route that extends 40,000 miles (64,000 km) beyond the moon at its farthest point, setting a new distance record for a crew-capable ship. Orion hits that milestone around day 10 and will spend two weeks in orbit before preparing for the trip home. The spacecraft will return to Earth on Dec. 11 with a splashdown in the Pacific Ocean off the coast of California.

There are science experiments aboard the Artemis 1 mission, too. Aboard the SLS rocket, 10 cubesats launched with Artemis 1 and will be deployed on the way to the moon. Their missions vary widely, with some destined to orbit the moon and seek out traces of water ice while others will test exploration technologies. One, called NEA Scout, will use a solar sail to visit a tiny asteroid.

Inside Orion is a “Moonikin” manikin named Commander Campos, which is wearing a new, bright orange launch and entry suit NASA has designed for future astronauts. Two limbless manikins, nicknamed Helga and Zohar, will test a novel vest called AstroRad designed to protect astronauts from the harmful radiation of deep space. Still more experiments, like NASA’s Biological Experiment 1, will grow yeast, fungi and more inside Orion to see how the deep space environment affects genes and DNA. 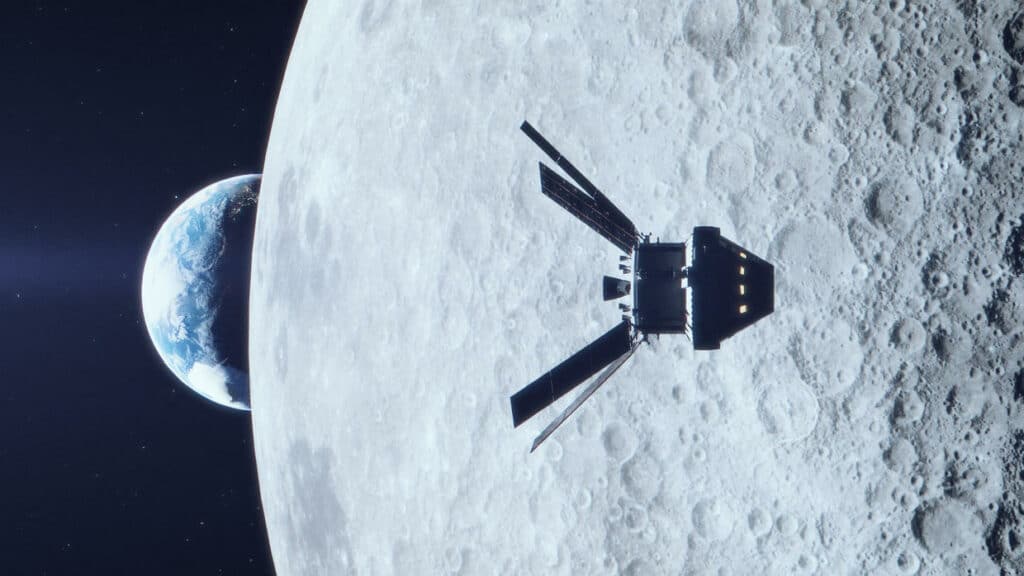 From Apollo’s legacy, Artemis to the moon

NASA’s Artemis program is named for the twin sister of Apollo and aims to land the first woman and first person of color on the moon during its first lunar landing on the Artemis 3 mission no earlier than 2025.

The SLS rockets and Orion spacecraft are a strange blend of space history and future promise. Artemis 1 launched from the same pad used by NASA’s Apollo 10 mission in 1969, which sent three astronauts around the moon months before the first astronaut landing on Apollo 11. (NASA invited Apollo 10 commander Tom Stafford to today’s launch.) The SLS rocket is powered by legacy space shuttle engines and solid rocket booster segments.

The 322-foot-tall (98 meters) SLS rocket is slightly shorter than the massive Saturn V rockets of Apollo, but the new vehicle is more powerful, generating 8.8 million pounds of thrust at liftoff, most of it from its solid rocket boosters.

The Orion spacecraft, too, has advancements. It’s 30% larger than an Apollo capsule and is designed to carry four astronauts, compared to Apollo’s three. Its 16.5-foot-wide (5 m) heat shield is the biggest of its kind yet to fly in space. Its service module, which provides its power and propulsion, is built by Airbus and provided by the European Space Agency, which in turn will fly European astronauts on future Artemis flights.

To reach the moon, NASA has tapped private companies like SpaceX, Northrop Grumman, Maxar and more to build the crewed lunar landers, Gateway space station habitats and other components for Artemis. That model, which itself is based on NASA’s commercial space efforts on the International Space Station, will serve as a template for missions to Mars, too, NASA Administrator Bill Nelson said. Admittedly, he added, a NASA crewed flight to Mars isn’t likely until at least the late 2030s.

“Our DNA, as an American people now joined by our international partners, is to explore,” Nelson told Space.com of the Artemis program’s goal. “We built this country with a frontier, and that frontier is upward.”