23 Holy Places With A Deep Connection To Nature

by Anna Norris: Engulfed by nature… 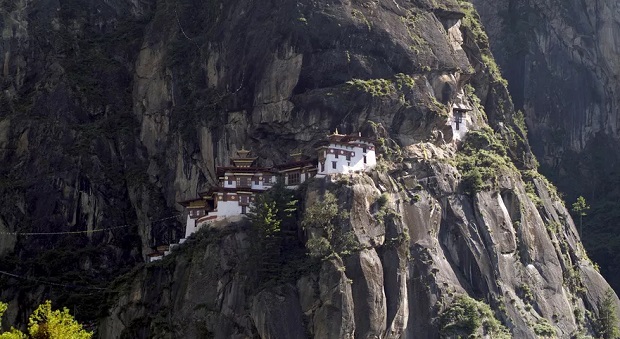 From Hawaii to India, these temples, monasteries and spiritual sites are situated right in the midst of breathtaking natural landscapes. With histories dating back hundreds of years, enduring both regional conflicts and natural disasters, these sacred places are as intriguing as they are beautiful. 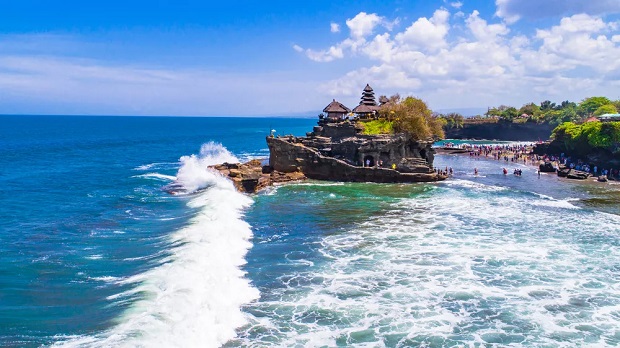 Pura Tanah Lot, which translates to “Land in the Sea,” is one of the seven sea temples off the coast of Bali, Indonesia. Local legend says that a traveling monk stopped to rest on the island and told fishermen to build a shrine there in order to worship the Balinese sea gods. Supposedly, poisonous sea snakes roam beneath the surface of the water to guard the temple against intruders and evil spirits. 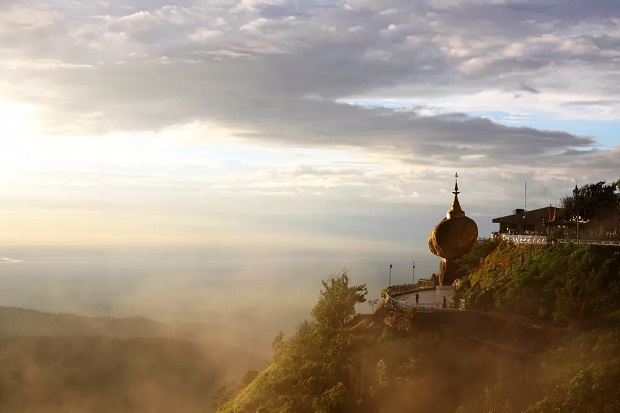 The Kyaiktiyo Pagoda (Golden Rock) is a Buddhist pilgrimage site that precariously sits atop Mount Kyaiktiyo in Mon State, Myanmar. Layers of gold leaves pasted by devotees give this luminous rock its name. Legend has it that the rock doesn’t fall because it enshrines a strand of Buddha’s hair.

Our Lady of Covadonga Monastery 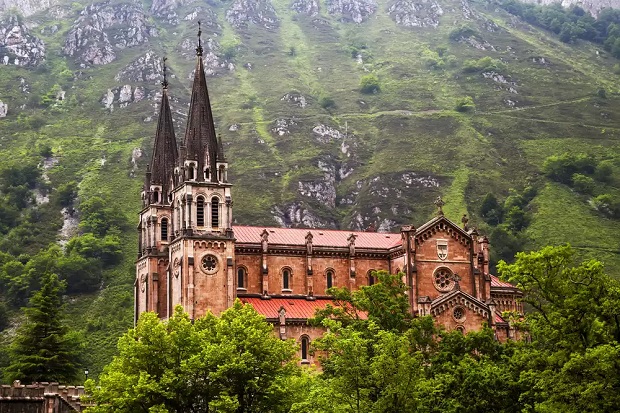 Located in the village of Covadonga in Asturias, Spain, Our Lady of Covadonga is a shrine devoted to the Virgin Mary. The basilica was built to house a statue of Mary that, once mysteriously discovered, earned the Christians victory in a battle against the Moors in the 8th century. The gorgeous structure that stands today dates back to the 16th century. 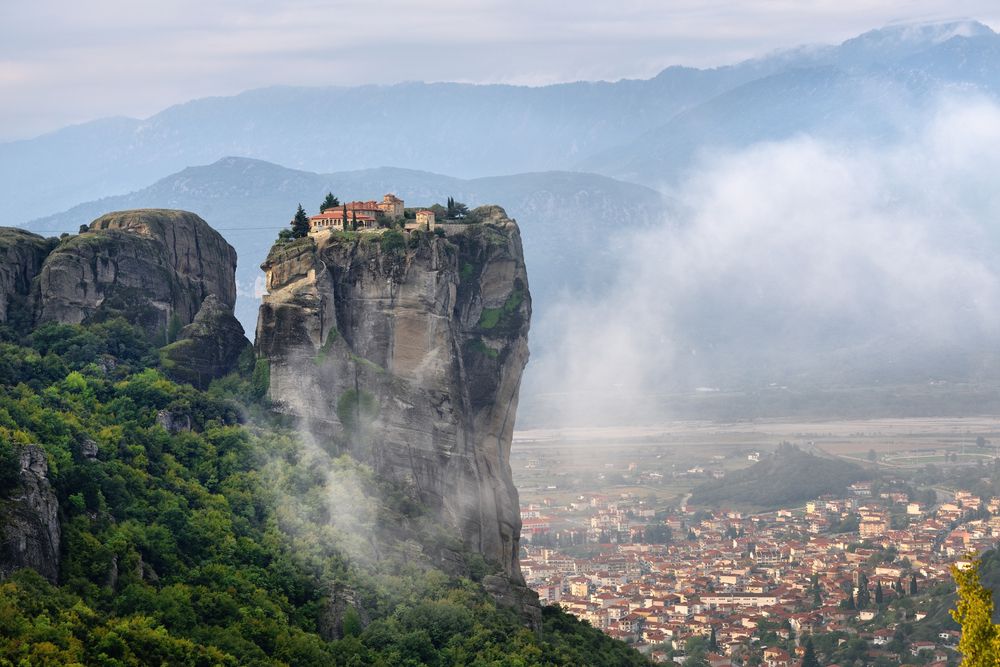 Translating to “in the heavens above,” this group of six Eastern Orthodox monasteries were built on the sandstone pillars of central Greece that have endured a rocky past. As many as 20 monasteries were originally inhabited by monks in the 11th century. Only accessible by nets and ladders, the rock pillars served as protection against the Turkish invasion. After the invasion and bombings during World War II, there are only six remaining monasteries. Today, Meteora is an official UNESCO World Heritage site. 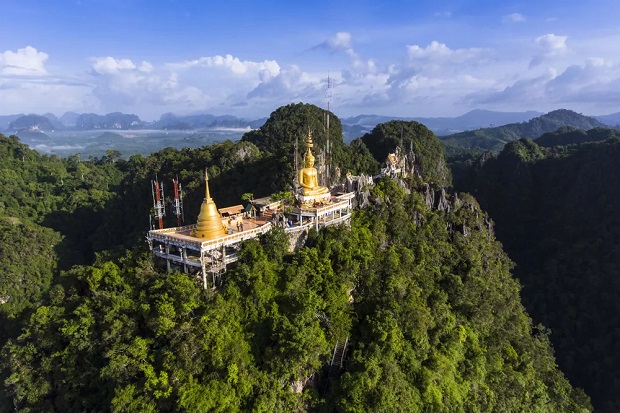 Wat Tham Suea (Tiger Cave Temple) near Krabi, Thailand, rests on top of a limestone cave. Tiger paw prints in the cave hint at this Buddhist temple’s history: Legend has it that a monk saw the tigers in the cave while he was meditating. The sweeping view of the forests of the Kiriwong Valley are well worth the 1,272 steps to the summit. 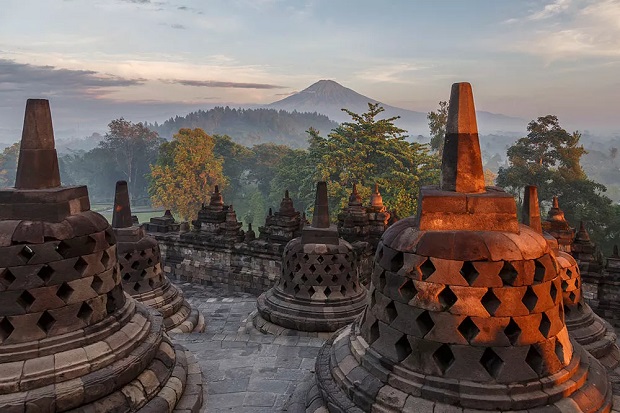 Deep within the Kedu Plain, between two volcanoes and two rivers, reigns the world’s largest Buddhist temple. Built in the 9th century, the Candi Borobudur in Magelang, Central Java, Indonesia, is an architectural feat: Six platforms, 504 Buddha statues and more than 1,000 relief panels over three levels that symbolize and illustrate the three worlds in Buddhist cosmology. A UNESCO World Heritage Site, its history remains murky. No one knows who built it, but one thing is for certain: It was abandoned for some reason and had to be dug out from the overgrown landscape once it was re-discovered.

Temple of the Golden Pavilion 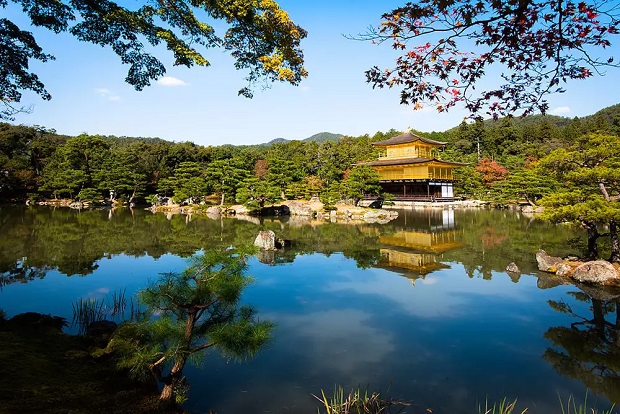 Kinkaku-ji (Temple of the Golden Pavilion), also known as Rokuon-ji (Deer Garden Temple), is a Zen Buddhist temple in Kyoto, Japan, surrounded by a classic Japanese strolling garden. The temple itself was envisioned as an extension of the outside world, with different architectural styles for each of its three floors. The temple that sits today is a rebuilt version of the original, which was burned down by a mentally unstable monk in 1950. 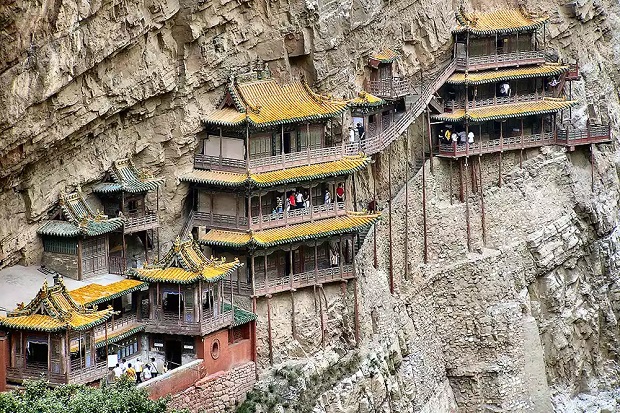 Built into a cliff near Mount Heng in Shanxi Province, China, the Hanging Monastery is the only temple that embodies the three traditional religions in China: Buddhism, Confucianism and Taoism. Strategically placed to be protected from the weather, legend says this temple was built by a single monk over 1,500 years ago. In accordance with Tao practices, the location of the temple, so far from the ground below, keeps the monastery in relative silence. 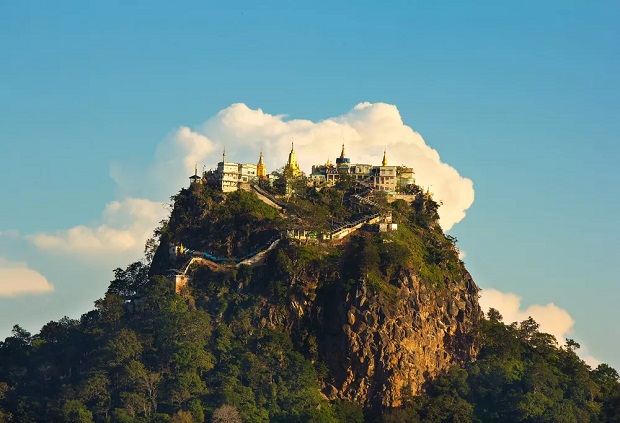 With 777 steps to the summit, Taung Kalat Monastery sits a volcanic plug called Mount Popa. An oasis in the arid region of Myanmar, the temples are dedicated to “Nats” (natural spirits revered by the Burmese), alongside Buddhism. Legend has it that Mount Popa was created as a refuge for two sibling nats who were trying to hide from a king. Interesting superstitions accompany this holy site: If you ever decide to visit, tradition cautions against wearing red, black or green (and leave the pork at home, because it’ll offend the nats).

Valley of the Temples 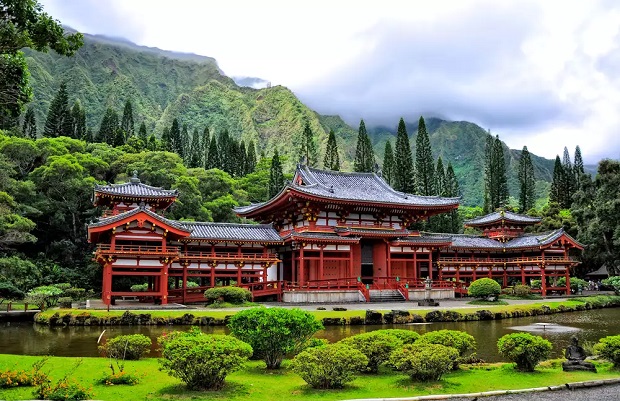 Though it is a replica of the 900-year-old temple in Kyoto, Japan, this Buddhist structure stands on its own. Situated in the gorgeous Valley of the Temples Memorial Park in Oahu, Hawaii, the Byodo-In temple is surrounded by two acres of koi ponds and Japanese gardens (not to mention the gorgeous Ko’olau mountains as a backdrop). This holy place is non-denominational and was built in celebration of Japanese culture in Hawaii. 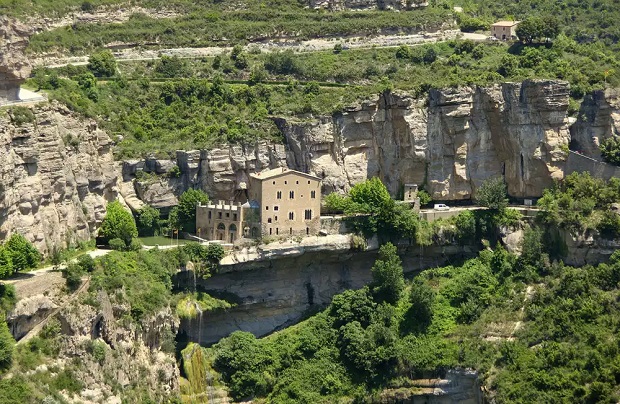 This 11th-century structure blends into the Cingles Bertí cliffs in Catalonia, Spain. Remarkably, the structure has never been restored. Visitors can hike from the nearby Riells del Fai village to explore caves, marvel at waterfalls and even stay overnight in the monastery, which has been converted into a hostel. 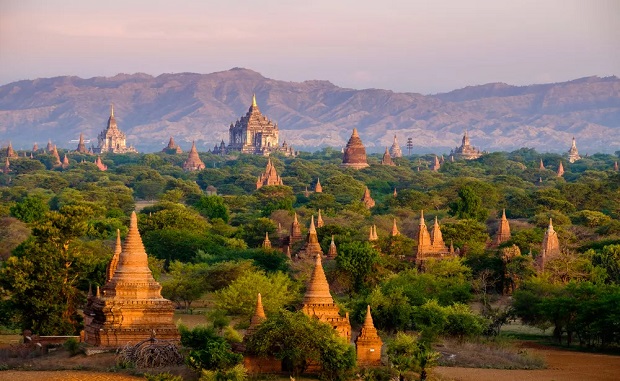 In the Mandalay region of Mymar, there is an ancient city called Bagan that was once adorned with over 10,000 Buddhist temples and pagodas. Today, about 2,200 of those structures remain in the arid plains. These ancient structures still stand since their construction between the 11th and 13th centuries, despite being located in an active earthquake zone. 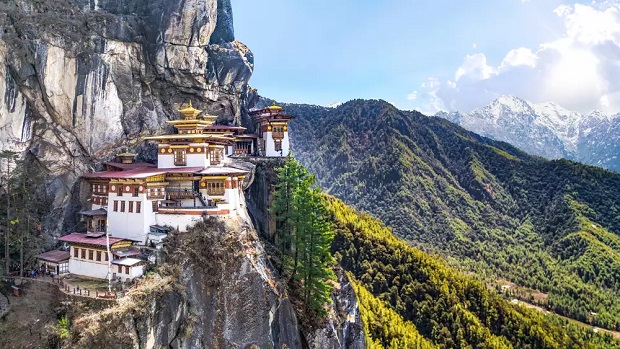 The Taktsang Palhug Monastery in the Paro Valley of the Paro District in Bhutan is a Himalayan Buddhist sacred site. According to legend, a famous Buddhist guru, who was responsible for introducing the religion in Bhutan, traveled to the cave on the back of a tiger, where he meditated in the cave for three years, three months, three weeks, three days and three hours — until he reappeared in eight incarnated forms and became holy. In the 17th century, a man named Tenzin Rabgye (who some believe could have been the guru reincarnated) built the temple around the cave, thousands of feet above the valley. 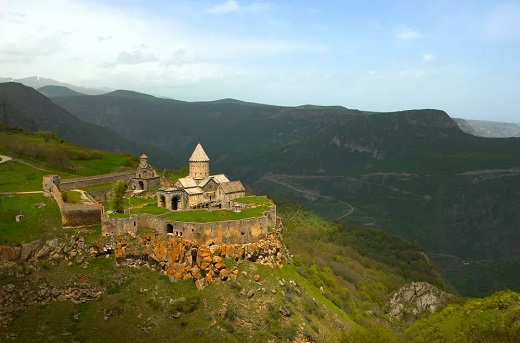 Built in the 9th century on the edge of the Vorotan River gorge in the Syunik Province of Armenia, Tatev has endured destruction by invading conquerors and hostile neighbors over hundreds of years. According to local legend, an apprentice climbed atop the main church and was so surprised to be seen by his master that he fell, asking God to give him wings. Visitors can access the monastery via the longest-running reversible cable car on the planet. 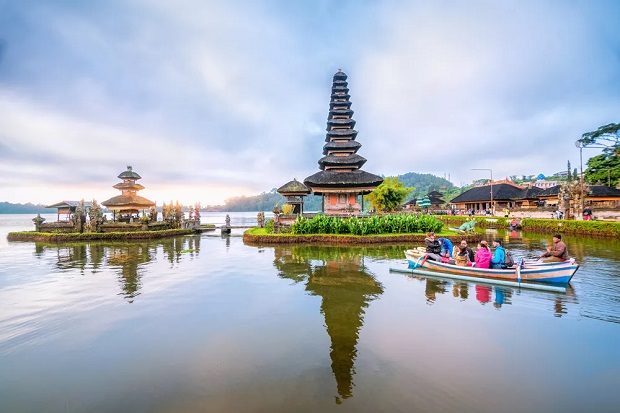 Pura Ulun Danu appears to calmly float atop Lake Beratan, the Lake of the Holy Mountain, in Bali, Indonesia. Built in 1663, this Shaivite Hindu water temple has been used to make offerings to the Balinese water goddess, Dewi Danu. Its 11 stories are dedicated to Shiva and Parvathi, and there is also a Buddha statue inside the temple. 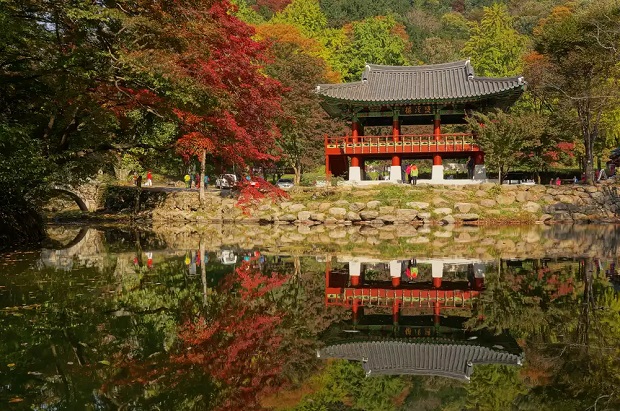 This Buddhist temple was built by a Zen master in 632 A.D. amid the forest of the slopes of a mountain in Naejangsan National Park located in Jangseong County, Jeolla province, South Korea. Baeg literally translates to “white sheep,” because, as the story goes, a white sheep came down the mountain to listen to a sermon and reached enlightenment. 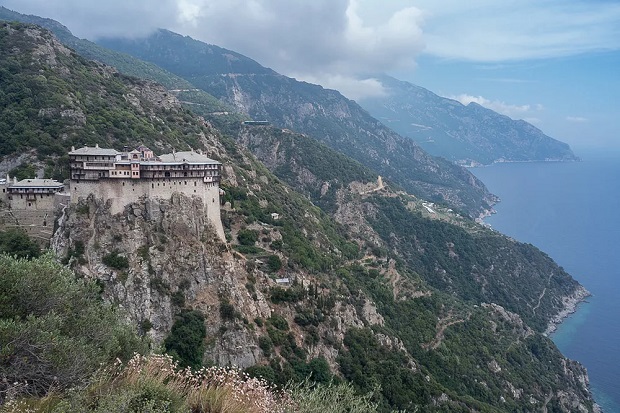 Both a mountain and a peninsula amid the Aegean Sea, Mount Athos is a World Heritage Site. It’s only accessible via ferry, and you can only visit if you are a man and you get a permit first — according to a rule established in 1046 that’s still in effect. Simonopetra Monastery was built in the 13th century and is dedicated to Jesus’ Nativity. 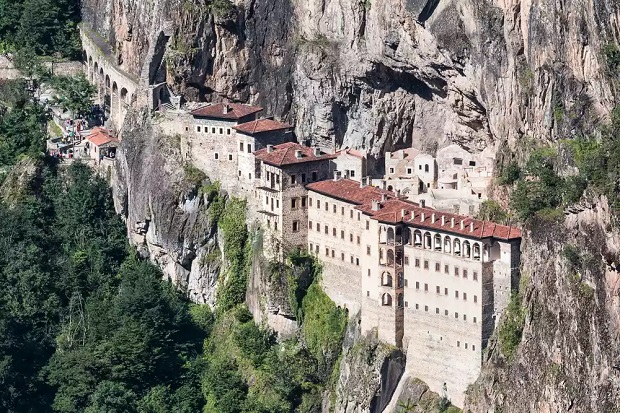 At an altitude of nearly 4,000 feet, this Greek Orthodox monastery in the Trabzon Province of Turkey has a breathtaking view of Altindere National Park. Founded in 386 A.D., the monastery is dedicated to the Virgin Mary. According to local legends, it was built by two priests after they found an icon of Mary in one of the mountain’s caves. 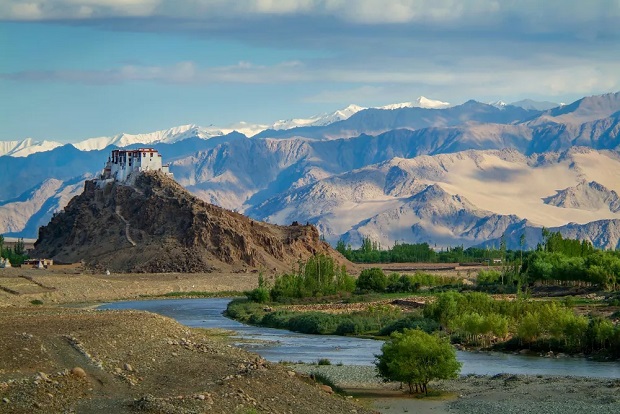 The Buddhist temples of the Leh District in Ladakh, India, are located between two mountain ranges in a beautiful region known as the “land of high passes.” The temple featured here is the Stakna Gompa, which translates into “tiger’s nose.” 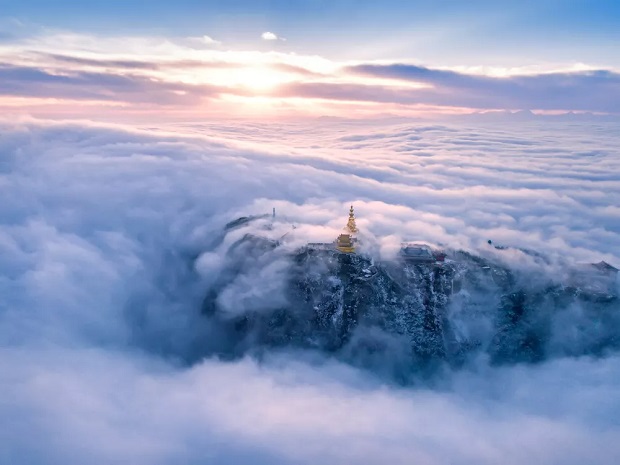 The tallest of the Four Sacred Buddhist Mountains of China, Mount Emei is the home of the first Buddhist temple built in China in the 1st century. Spotted with no fewer than 76 Buddhist monasteries, Mount Emei is not just a place for enlightenment — with spectacular views of the sunrise and endless seas of clouds, it’s a place to completely immerse yourself in China’s natural wonders. 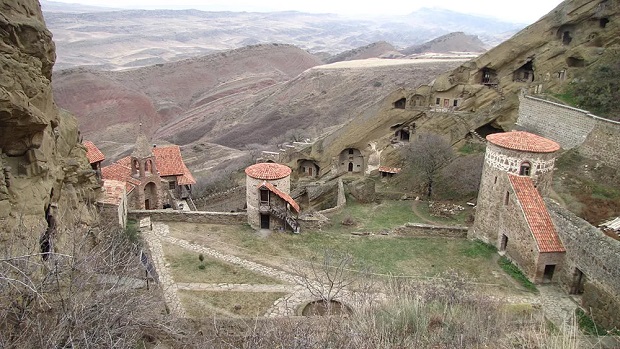 This Orthodox monastery is carved into the rocks of the Kakheti region of Eastern Georgia, partially in the Agstafa region of Azerbaijan. Home to protected animal species as well as evidence of the most ancient human habitations in the area, it has survived a violent history since its founding in the 6th century. Not only did it persist through Mongolian and Safavid attacks, but it also was once a training ground for the Soviet military during the Soviet War in Afghanistan (to the outrage of many). 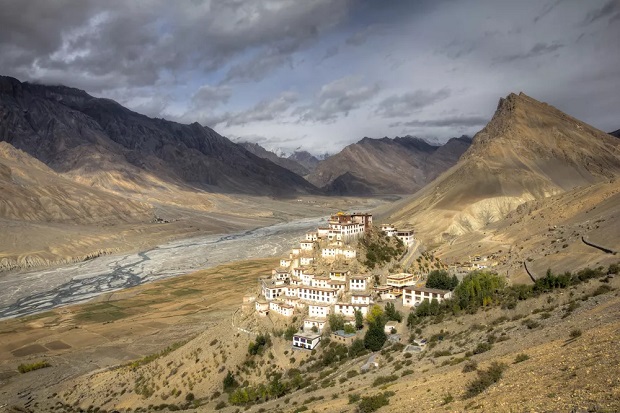 This Tibetan Buddhist monastery was created in the 11th century. At an altitude of 13,668 ft, it sits within India’s breathtaking Spiti Valley. Amazingly, the Key Gompa has endured Mongol attacks, a fire and an earthquake. 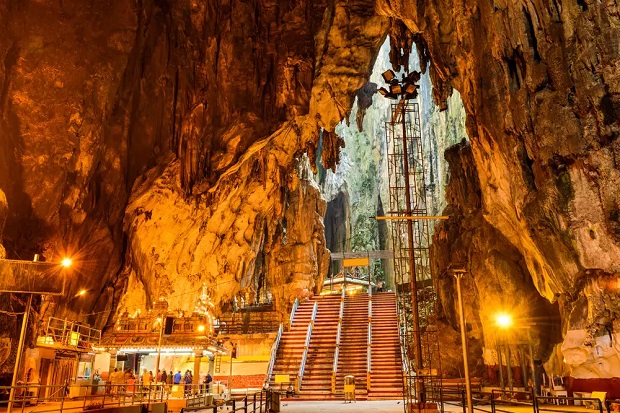 Near Kuala Lumpur in Malaysia is a shrine dedicated to Lord Murugan, a Hindu god of war. Many of the caves are filled with Hindu statues and paintings, while others still remain untouched, teeming with vibrant wildlife. Underneath the main Temple Cave is another known as the Dark Cave, with marvelous formations and unique species.