The 15 Tallest Mountains In The World 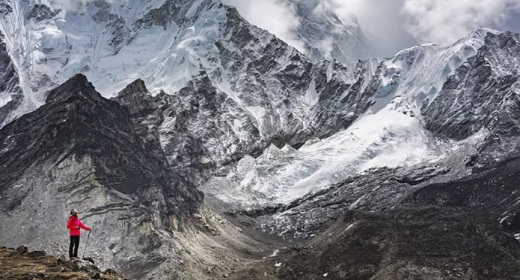 There’s a reason why climbers spend years training to tackle the world’s highest peaks. These massive mountains can be formed by volcanic explosions as well as tectonic faults and collisions, some of which may have started reshaping the Earth’s surface over 3.75 billion years ago.

The following 15 giant formations are considered the tallest mountains in the world (measured from sea level to their summit).

The Highest Point on Earth

Pinpointing the highest point on Earth depends on how it’s measured. Mount Everest is typically associated with the title since its highest peak’s altitude above mean sea level is 29,029 feet. However, Mauna Kea in Hawaii is the tallest mountain from base to peak, at over 33,5000 feet. Looking at the farthest point from the Earth’s center, however, would point you toward Mount Chimborazo in Ecuador, whose summit stands over 6,800 feet farther from the center of the Earth than Everest. 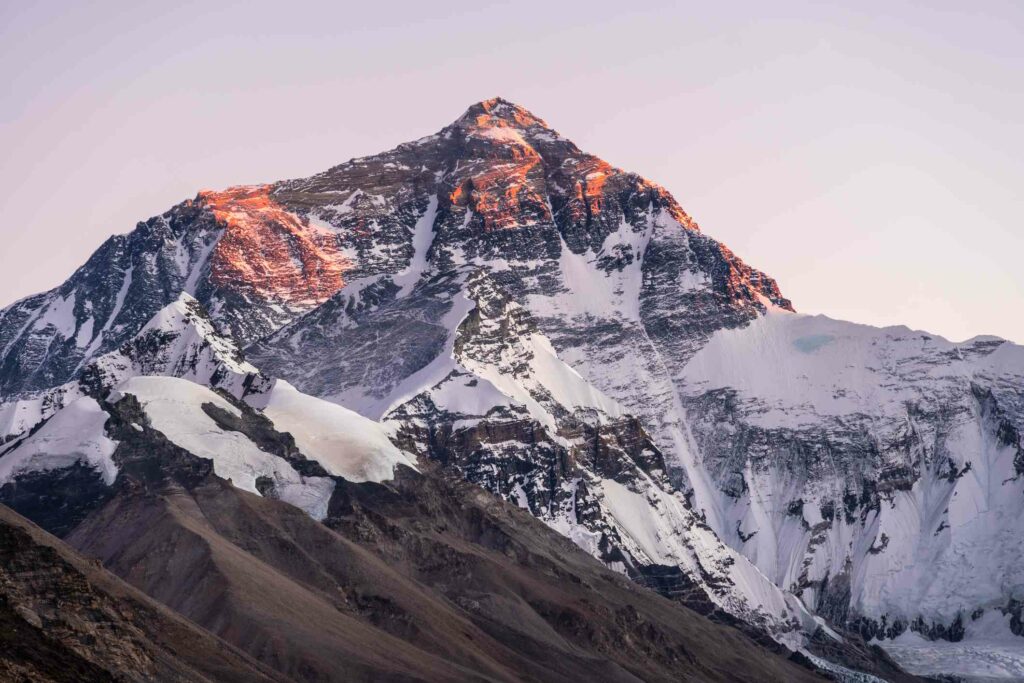 The world’s tallest mountain also goes by the Tibetan name “Chomolungma” and the Sanskrit name “Sagarmatha” (the English name Everest is an homage to the surveyor who first measured the peak). It sits on the border between China and Nepal, and the countries issue anywhere from 300 to 800 permits to climb the giant each year.

The two nations have debated the summit’s height throughout history, as China’s previous official measurement had put the mountain over 13 feet lower than Nepal’s. In 2020, however, data from surveys performed in both countries put the new height of the 50-60 million-year-old mountain at 29,031.69 feet, though scientists believe that it is still growing by half a meter per century. The summit only has room for about six people at a time, and concerns about overcrowding on the mountain only increased when microplastics were found near the top in 2020. 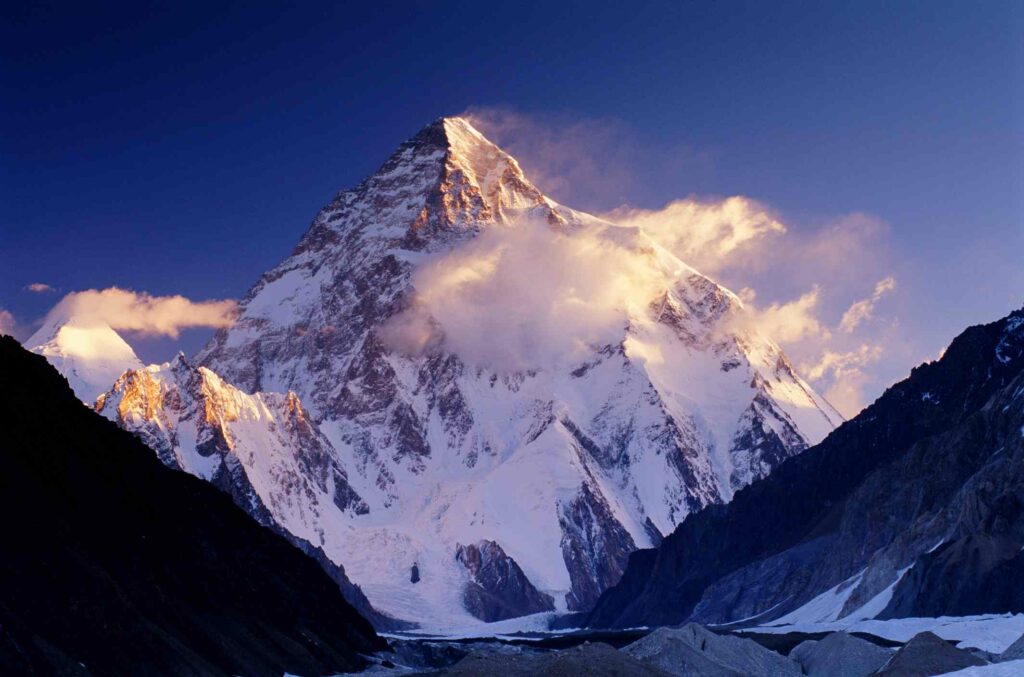 Located along the Pakistan-China border, K2 rises 28,251 feet above sea level, making it the second tallest mountain in the world after Everest. Though it’s not as tall, mountaineers generally consider K2 to be a more difficult climb than Everest, since it has less support via fixed ropes and routes, more unpredictable weather, and a steeper climb. Because of this, only 367 people had climbed K2 as of 2018 (compared to Everest’s 4,000). In 2021, a team of 10 Nepali climbers made it to the summit in winter, the first group to do so during the most treacherous season. 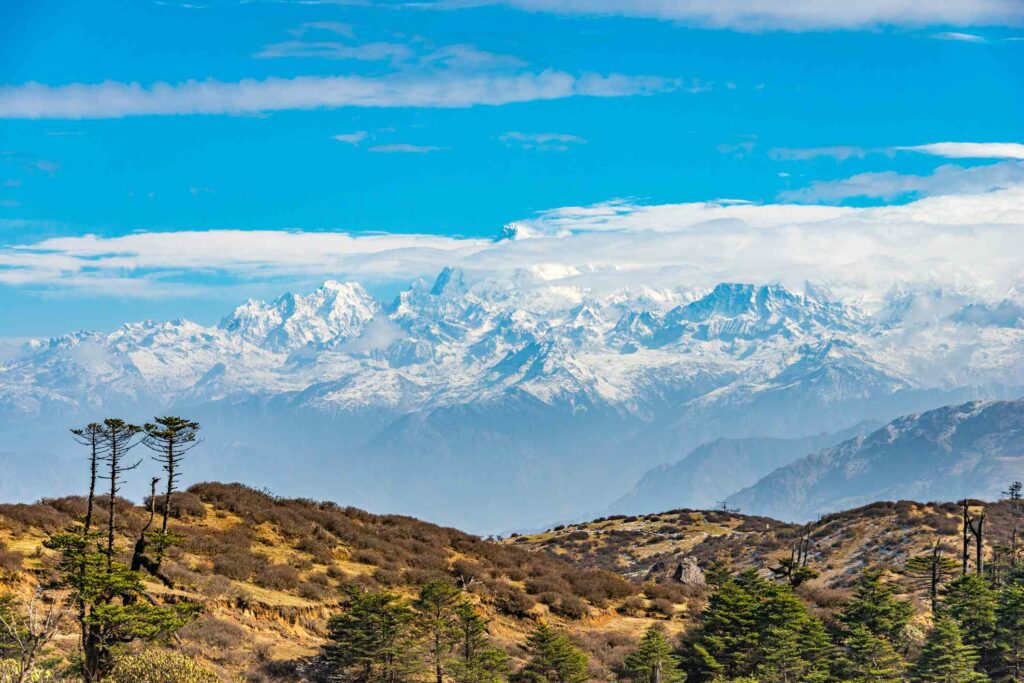 The highest peak in India and the third tallest mountain in the world at 28,169 feet, Kanchenjunga welcomes a maximum of 20-25 climbers each year—though 2019 saw a record with 34.

This section of the Himalayas also blends into eastern Nepal, and the region hosts about 2,000 species of flowering plants, 252 species of birds, and a few of the country’s most endangered mammals, such as the snow leopard and the red panda. Nepal protects Kanchenjunga through the Kanchenjunga Conservation Area Project, providing sustainable community development for the district’s population of 122,072, wildlife monitoring, and natural resource management. 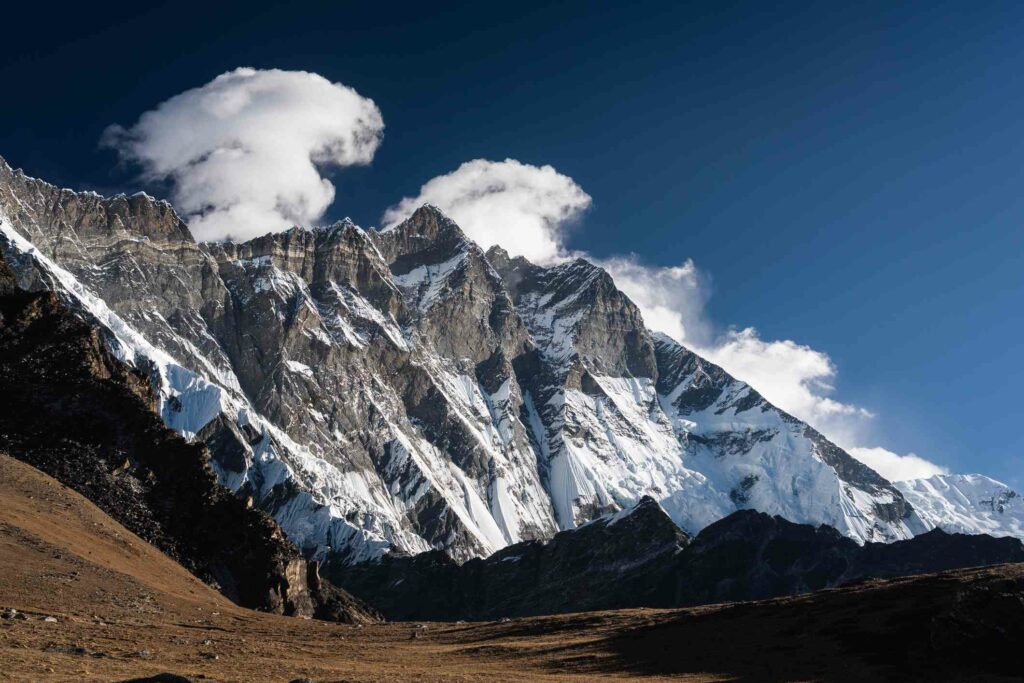 Also found on the border of Nepal and China, Lhotse is separated from Everest by just under 2 miles, though only 575 climbers reached the 27,940-foot peak between 1955 and 2019. In 2011, an American guide by the name of Michael Horst became the first to summit both Everest and Lhotse within the same 24 hours.

As Mount Everest continues to fall victim to overcrowding, the route to Lhotse has gained more and more popularity since it is less crowded, less expensive, and follows the same route as Everest for the beginning portion. A series of accidents, avalanches, and earthquakes kept climbers from summiting Lhotse in 2014, 2015, and 2016. 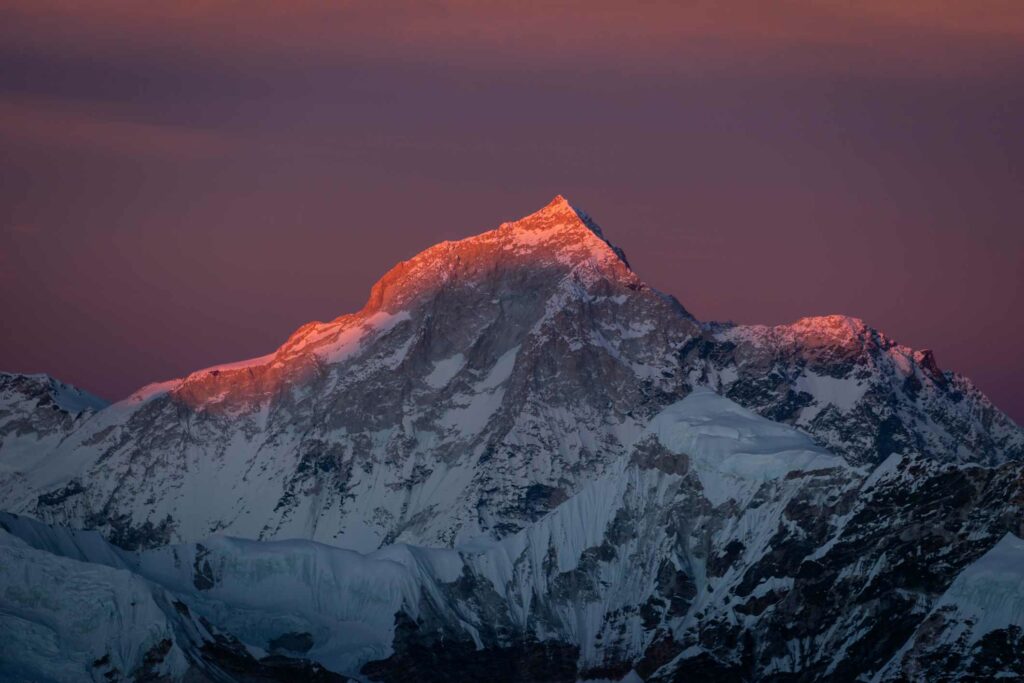 A bit farther southeast of Mount Everest, the pyramid-shaped mountain of Makalu rises 27,766 feet on the Himalayan Nepalese-Tibetan border. Its remote, four-sided peak makes Makalu one of the world’s most difficult mountains to climb, due to its sharp edges and isolated position exposed to the elements. As a result, only five of the first 16 climbing attempts proved successful, and even now, only 206 have made successful ascents.

In 2018, Swedish explorer Carina Ahlqvist led a climb to raise awareness for climate change in support of the European Space Agency’s Climate Change Initiative. A team of scientists collected measurements to study rockfalls and landslides, and also surveyed the glacier at the base of the mountain to examine the region’s climate history. 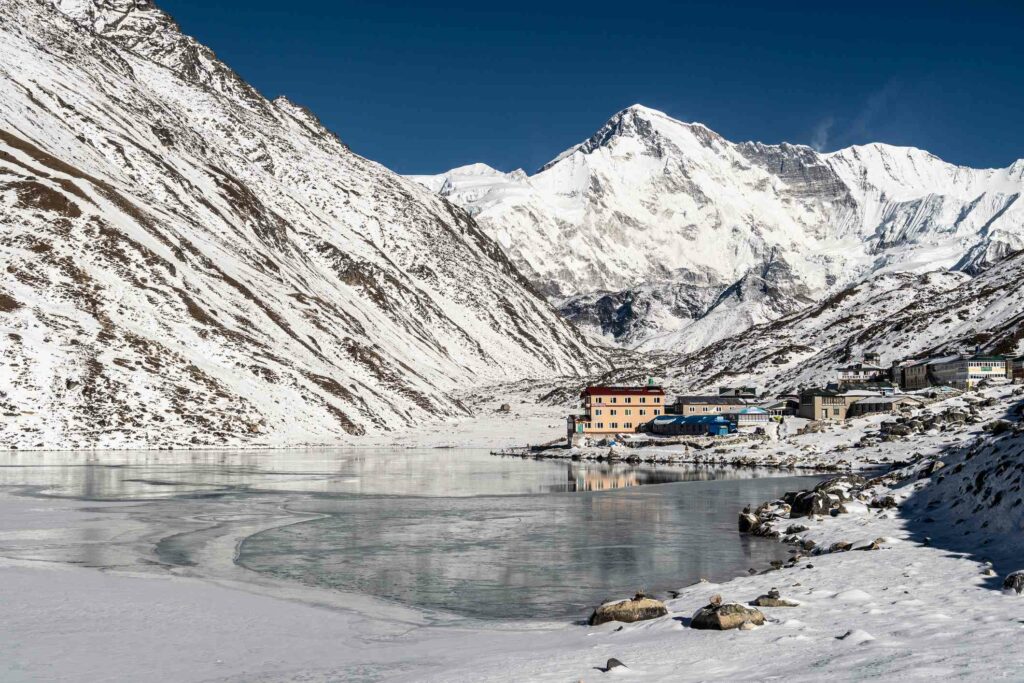 Standing at 26,906 feet in the Himalayas, Cho Oyu is widely considered one of the most achievable of the world’s fourteen 8,000-meter peaks (26,247 feet), thanks to its northwestern face and gentle slope. It has a 63.4% success rate with nearly 4,000 climbers and guides having reached the summit to date, the highest number of all the eight-thousanders. Climbers tend to use this mountain as a stepping stone to train for Everest or to see how their body reacts to the high altitude. That’s not to say scaling this massive mountain isn’t dangerous, however; Cho Oyu has still claimed the lives of at least 52 people since 1952. 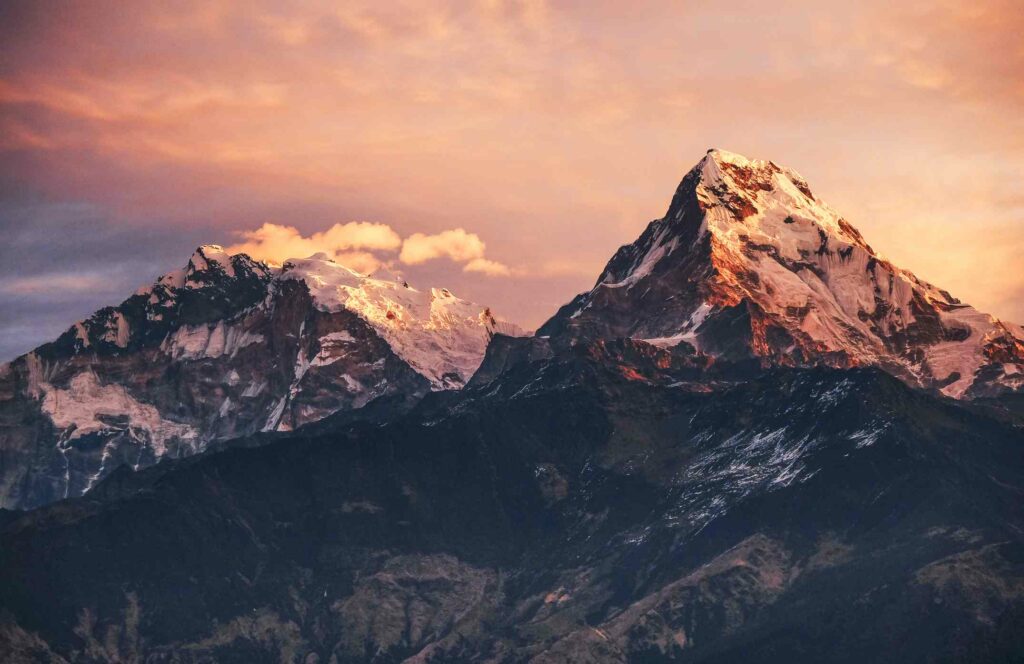 This snow-capped mountain in the west-central part of Nepal is the largest located entirely within the country. It is situated on the western side of the Kali Gandaki River gorge, believed to be the world’s deepest subaerial valley, consisting of several glacier-covered peaks that exceed 25,000 feet.

There have been over 550 successful ascents of Dhaulagiri I, the highest peak at 26,795 feet, since 1953. Similarly to Everest, the summit of Dhaulagiri is composed of limestone and dolomite rock layers that originally formed at the bottom of the ocean hundreds of millions of years ago and were pushed up by powerful tectonic forces. 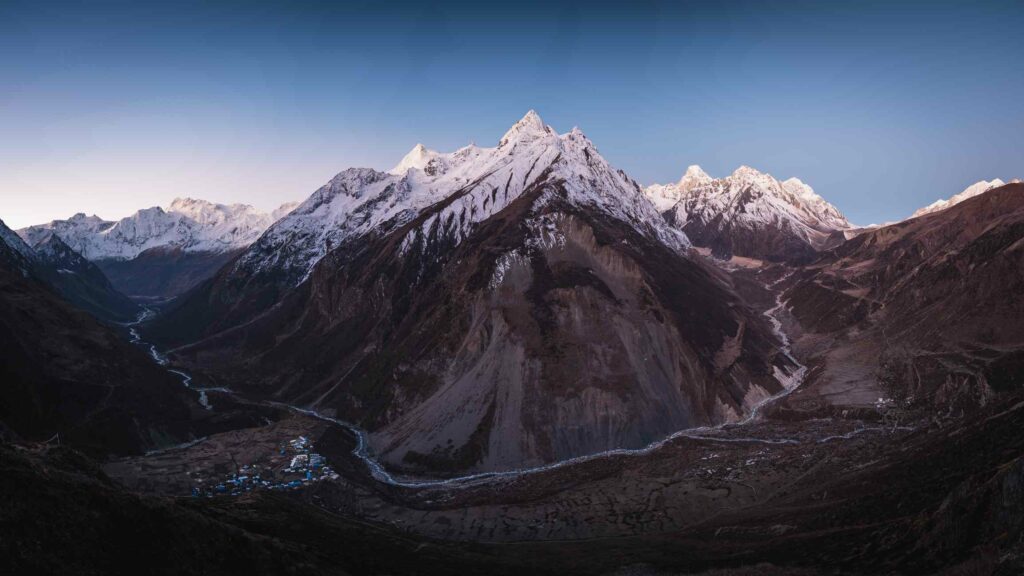 Manaslu is known for being one of the more dangerous of the eight-thousanders due to its high number of avalanches. Just over 52% of expeditions are successful and there’s a death rate of 1 in 10 among climbers.

In 1974, an all-female team from Japan became the first women to successfully summit an 8,000-meter peak when they reached the top of Manaslu, which measures 26,781 feet. The 642-square-mile Manaslu Conservation Area was declared in 1998 to protect the habitats of the 33 mammal species, 110 bird species, 11 butterfly species, and three reptile species that live in the Manaslu region in the North Nepalese Himalayas. 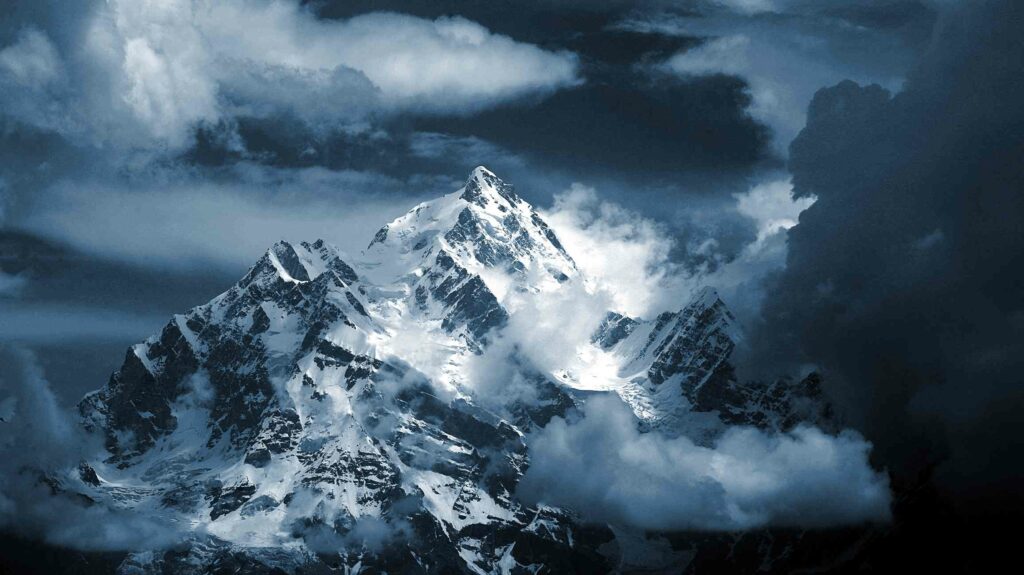 Nanga Parbat earned its reputation as the “Killer Mountain” after a total of 31 people died attempting to reach the summit before its first ascent in 1953 (a feat completed by Austrian climber Hermann Buhl, who performed the climb without the use of supplementary oxygen).

Today, the 26,660-foot mountain in Pakistan has seen at least 339 successful summits and 69 deaths, giving it a death rate more than six times that of Everest. Nanga Parbat attracts geologists as well, since it’s rising at a rate of 7 millimeters (0.275 inches) per year, making it the fastest rising mountain on Earth. Scientists believe this is due to erosion, which reduces the weight of the mountain range and accelerates the tectonic process below the mountain. 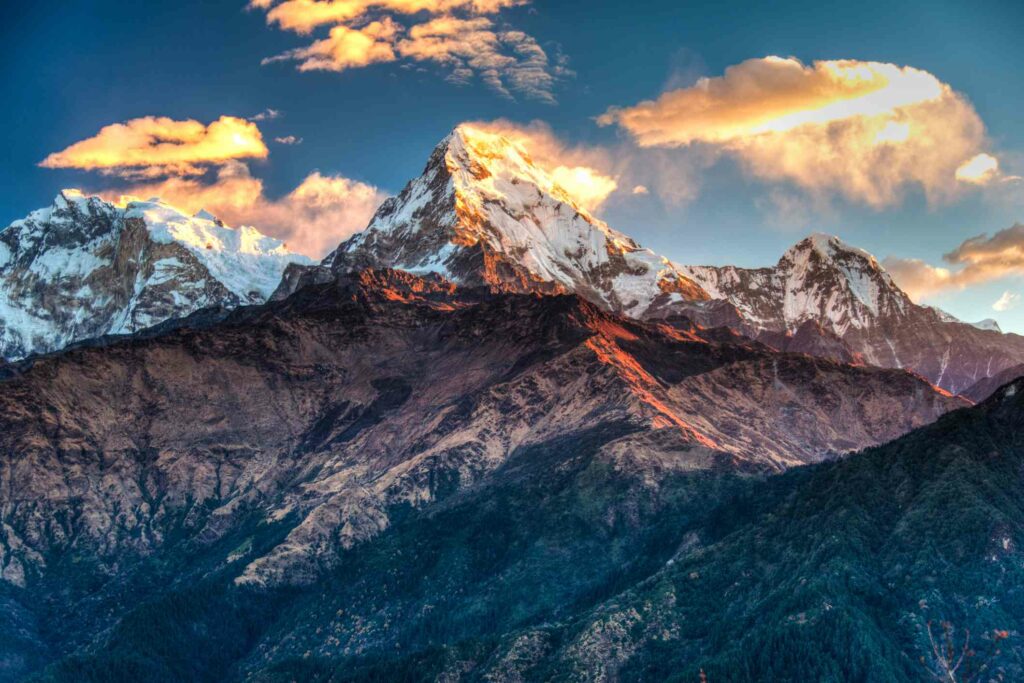 On the other side of Dhaulagiri, across the Kali River gorge in Nepal, Annapurna is perhaps the most deadly mountain in the world. In 1950, Maurice Herzog and Louis Lachenal were the first to reach the summit (losing their toes and fingers to frostbite as a result), marking the first of the Earth’s 14 eight-thousanders to be scaled; another successful climb wasn’t achieved until 20 years later.

Although its 26,545 feet make it just the tenth tallest on the list, it has the highest fatality to summit ratio (38%). At 2,946 square miles, the Annapurna Conservation Area, which ranges all the way to the mountain’s peak, is Nepal’s largest protected area.

Gasherbrum I (China and Pakistan) 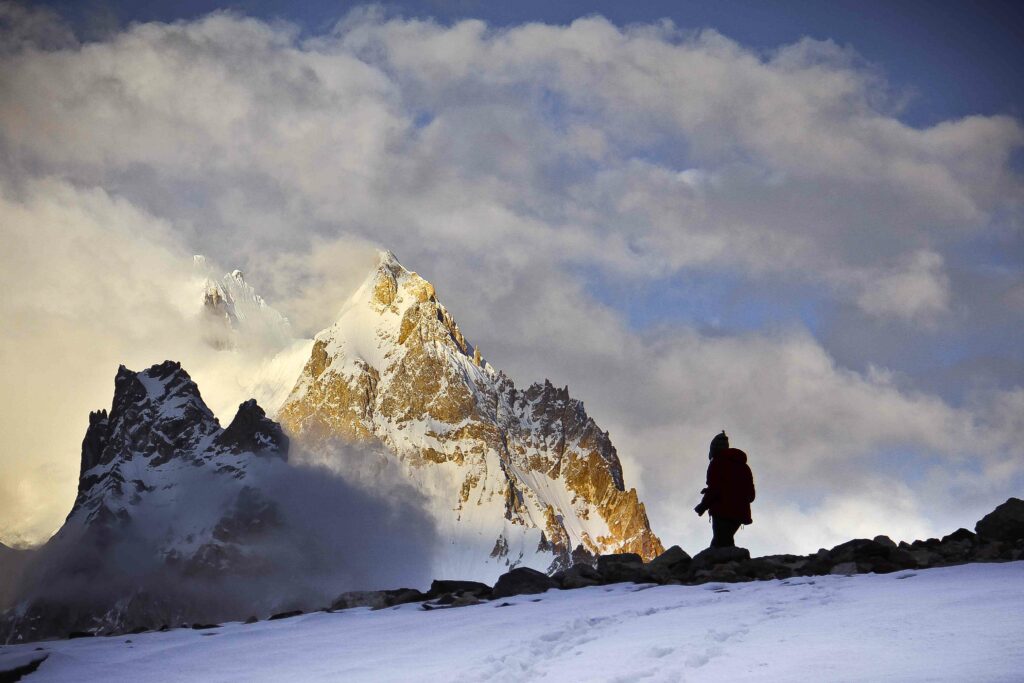 Gasherbrum I was first summited in 1958 by an eight-man American expedition led by Nicholas B. Clinch, the only eight-thousander to be climbed by Americans first. Located on the border of China and Pakistan in the Gilgit-Baltistan region, known for particularly harsh climates and very little rainfall, Gasherbrum’s highest peak reaches 26,470 feet in elevation.

The mountain contains several glaciers, including the region’s famous Siachen Glacier known for hosting the highest battleground on Earth—at over 17,000 feet—and for being the site of occasional fights between Pakistan and China throughout history.

Broad Peak I (Pakistan and China) 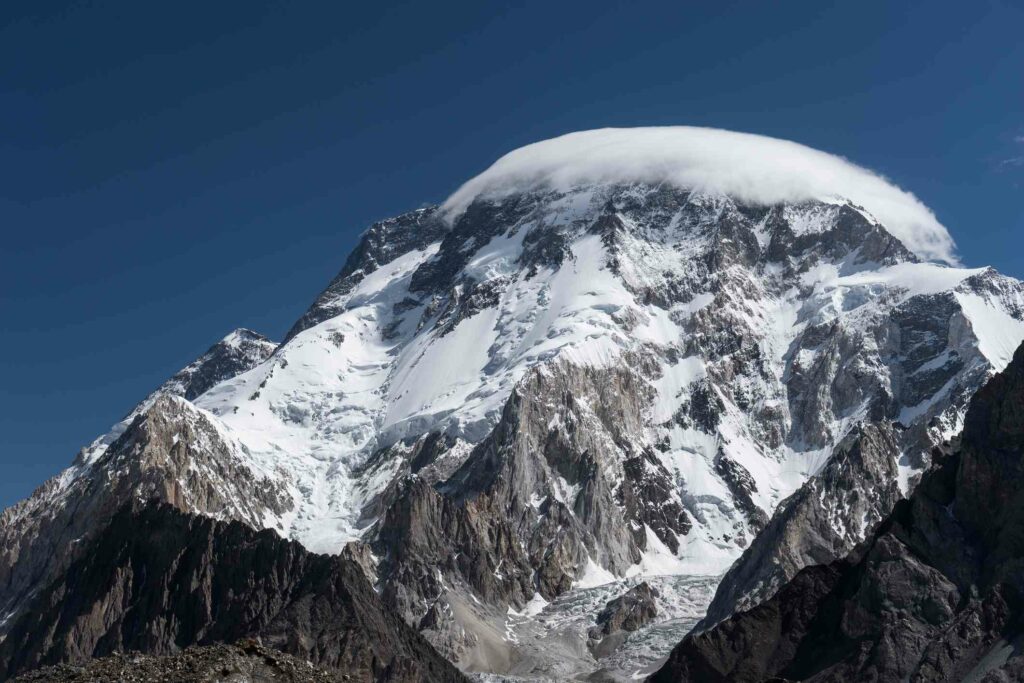 Within the climbing community, there has been debate as to whether Broad Peak’s central peak should be considered a separate mountain and be granted a spot as the world’s 15th eight-thousander. While scientific standards do not support the mountain classification at this time, geographers believe that climate change could alter the Karakoram mountain range enough so that it could be a separate formation in the future.

From the first summit in 1957 to 2012, Broad Peak was climbed 404 times, an average of just over seven successful summits per year. 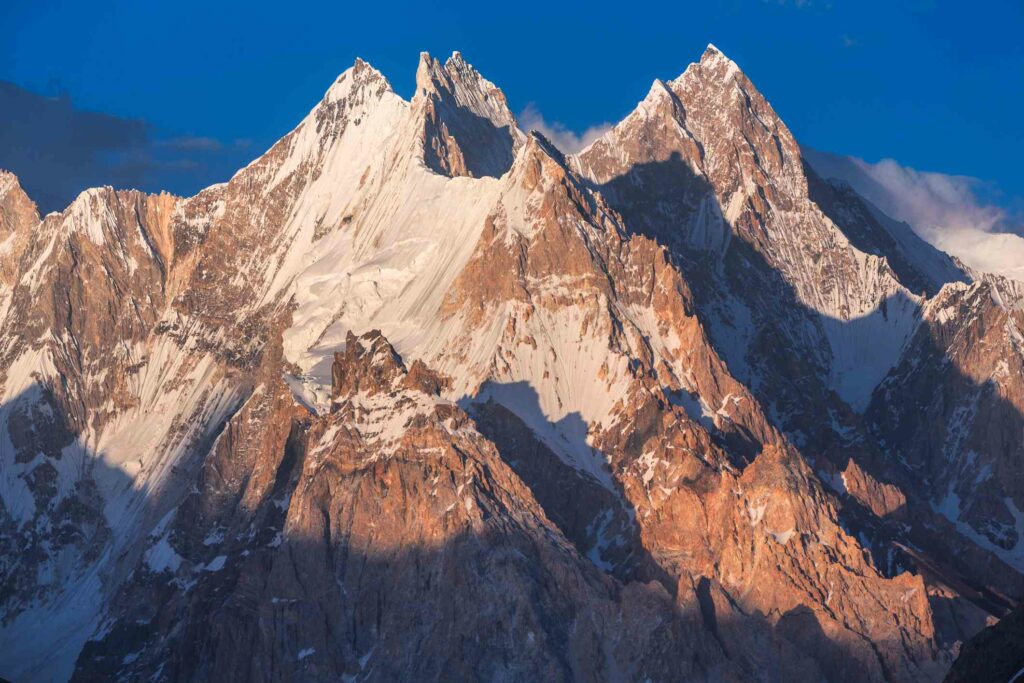 Along the same horseshoe-shaped ridge as Gasherbrum I (which is just 151 feet taller) Gasherbrum’s second-tallest peak is also the 13th highest mountain on Earth. At 26,358 feet above sea level, Gasherbrum II has the second-lowest fatality rate of the world’s eight-thousanders, resulting in some pretty adventurous activities including skiing, snowboarding, parachuting, and hang-gliding down from the summit. 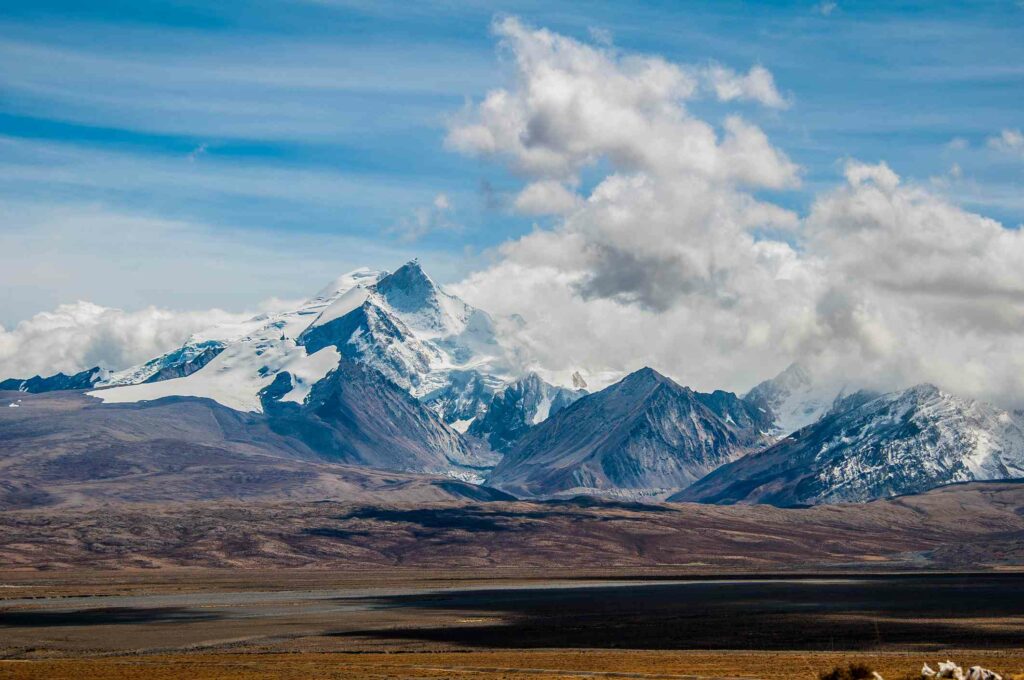 At 26,335 feet, Shishapangma was the last of the eight-thousanders to be conquered in 1964 after the area eased restrictions on foreign travelers. Although it’s considered to be another one of the easiest and shortest of the 8000-meter mountains, Shishapangma claimed the life of one of the world’s most famous climbers, Alex Lowe, after an avalanche struck on October 5, 1999 (his body wasn’t recovered until 16 years later). It is located on the Tibetan side of the Himalayas and saw at least 302 successful ascents between 1964 and 2012. 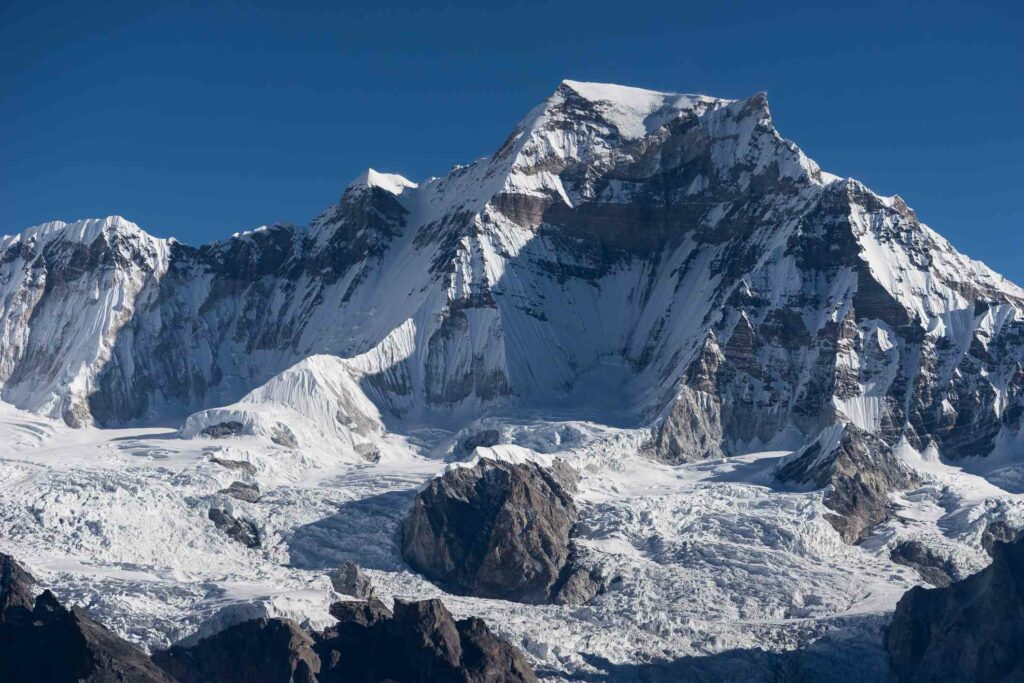 Found on the border of Nepal and China, Gyachung Kang is the highest peak in between Cho Oyu and Mount Everest at 26,089 feet.

On April 10, 1964, an expedition team led by Y. Kato, K. Sakaizawa, and Pasang Phutar became the first to reach the summit, followed almost immediately by another team led by K. Machida and K. Yasuhisa the very next day. As the tallest mountain that isn’t 8,000 meters tall, Gyachung Kang falls under the radar when it comes to mountaineering and has only been climbed a handful of times since 1964 (the last of which was in 2005).