by Paul Hockenos:  With soaring gas prices due to the Ukraine war and the EU’s push to cut emissions, European industries are increasingly switching 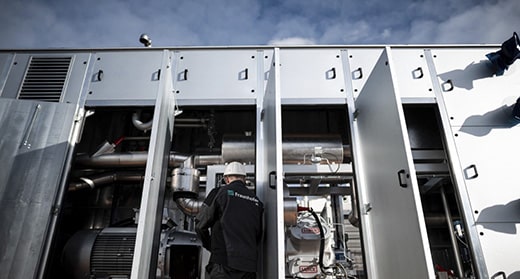 to high-temperature, high-efficiency heat pumps. Combined with the boom in residential use, the EU is now hoping for a heat pump revolution.

The Wienerberger brickworks in Uttendorf, Austria, in the Tyrolean Alps, has always required a steady stream of 90 degree C (194 degree F) heat to dry its construction blocks. This process would have been an expensive proposition for the company after Russia cut gas exports to Europe, as it was for most of Europe’s energy-intensive construction industry. But four years ago, Wienerberger — the largest brick producer in the world — made an investment in the future that is now paying off: it replaced Uttendorf’s gas-fired boiler with an industrial-scale heat pump, which whittles the factory’s energy bill by around 425,00 euros a year.

For decades, electric heat pumps have been used in European homes and other buildings for heating and cooling, but they’ve never gained much traction in manufacturing, which has far higher energy demands for producing hot water and steam. And because fossil fuels had long been relatively cheap, industries had little incentive to replace gas- and oil-powered systems with greener equipment. Now, with the development of heat pumps that can deliver temperatures up to 160 degrees C (320 degrees F) at a fraction of the price of gas boilers, and with gas prices skyrocketing due to the war in Ukraine, that calculus is being turned on its head. Many European businesses are rethinking their energy sources while also slashing their greenhouse gas emissions, an EU requirement. European industry is responsible for more than a quarter of the bloc’s greenhouse gases.

Heat pumps are three to five times more efficient than gas boilers, according to the International Energy Agency.

To meet its lofty energy goals and break its dependence on Russian gas, the EU is counting on nothing less than a heat pump revolution. In many countries, sales of heat pumps — primarily for residential use — doubled in the first half of 2022. In Germany, Europe’s largest consumer of Russian gas, demand jumped 52 percent last year, while growth across the EU in 2021 was 35 percent. Meanwhile, a somewhat less-heralded transition to heat pumps for manufacturing is gathering speed. Wienerberger, for instance, is now installing similar pumps at its brick foundries in the Netherlands, the U.K., Poland, Romania, and elsewhere in Austria.

“Five years ago most companies knew next to nothing about heat pumps,” says Veronika Wilk, a senior research engineer at the Austrian Institute of Technology. “Now companies are aware of them, and ever more heat pumps are installed in industry.”

A compression heat pump can both warm and cool air. In the winter, it raises indoor temperatures by removing heat from water, from deep in the earth, or from outdoor air, then ratchets up its temperature using a small amount of electricity and moves that air indoors. Even air as cold as -12 degrees C (10 degrees F) contains sufficient energy for a heat pump to extract and boost its temperature. In the summer, electric heat pumps lower indoor temperatures by removing heat from interior air and shunting it outside. Absorption heat pumps run not with electricity but with a heat source, which could be natural gas but could also be solar-heated water or even waste heat from data centers or sewers. They bring this heat up to a “useful” temperature, then deliver it as either warm air or hot water.

Depending on which way the heat is moving — indoors or out — the heat pump’s pistons either compress or expand a fluid, causing it to heat up or cool down, respectively. Because heat pumps only move fluids around, they can be more than twice as energy efficient as heaters that burn fuel.

According to the International Energy Agency (IEA), heat pumps are three to five times more efficient than gas. And if they’re run on solar, wind, hydropower, or waste heat, they have no emissions at all.

Unlike residential heat pumps, whose outdoor components are about the size of a washing machine, industrial versions — as large as a house — can take advantage of wasted “process energy” from factories to hike water temperatures to more than 190 degrees C (374 degrees F). At the Wienerberger factories, for example, brick dryers consume immense amounts of energy, with the drying chamber releasing mainly water vapor. This is condensed into hot water. The heat pumps then jack up its temperature from about 40 degrees C to around 90 degrees C, and return it to the drying process. Since the power source for the heat pump is the waste heat itself, this sequence consumes nearly 80 percent less energy than when the plant ran on gas.

The EU sees the buildout of heat pumps as crucial to its goal of slashing greenhouse gas emissions.

Prototype heat pumps made in Norway already operate at around 180 degrees C, and experts expect engineers within a decade to design technology that reaches temperatures of beyond 200 degrees C. This advance would open ever more processes in the energy-intensive chemical, paper, food, and refinery sectors to heat pump technology.

These kinds of heavy-duty heat pumps are now being used in hotels, restaurants, confectionaries, warehouses, swimming pools, greenhouses, chemical manufacturing, and in the drying of materials like paper and starch. Absorption heat pumps are especially suited to facilities that use both heating and cooling.

The Finnish company Kiilto, for example, manufactures chemicals, like glues, for the construction sector. Its Lempäälä plant now uses a hybrid industrial heat pump to recover heat from on-site electric cooling processes, as well as from a nearby geothermal source, to lift temperatures up to 75 degrees C.

At the Mars Wrigley Confectionery in the Netherlands, the largest chocolate factory in the world, heat pump extracts and boosts otherwise unusable exhaust heat from its refrigeration units, producing water as hot as 63 degrees C. The water is channeled through the factory’s piping network to keep chocolate and syrup warm. The technology has lowered the factory’s energy bill by 6 percent and has saved the plant about 26 terajoules in gas — equivalent to the amount of energy consumed by 625 European households. A second heat pump heats water for cleaning to 80 degrees C, delivering an additional saving of 12.25 terajoules.

Water is another viable source of heat. Inntal Nursery in Bavaria, Germany uses groundwater from wells near the Inn River and a single water-to-air heat pump about the size of a Sherman tank to heat 30,000 square meters of greenhouses year round. The water is drawn into the heat pump, boosted to 35 degrees C, sent through the underfloor heating system, then cooled and returned to the river.

A recent convert is the German chemical giant BASF, which has hired MAN, a German engineering company known for its trucks and buses, to build the world’s largest heat pump at BASF’s Ludwigshafen site, in western Germany. The system, the size of a conventional power plant, will exploit the waste heat of cooling processes to produce 150 tons of steam per hour, thus preventing an estimated 390,000 tons of carbon dioxide annually from reaching the atmosphere.

A German think tank estimates a widespread conversion to heat pumps could cut EU gas use by 32 percent in five years.

In addition to the benefits of a more efficient operation, companies with low carbon processes can also bring down the cost of their CO2 emissions, for which they are billed per ton through the European Union’s Emission Trading System. At about 85 euros per metric ton of carbon dioxide — last December’s price — the savings are significant.

The EU sees the buildout of heat pumps, both for industrial and non-industrial buildings, as crucial to its goal of slashing greenhouse gas emissions by at least 55 percent before 2030. Its REPowerEU initiative aims to expedite the replacement of as many as a third of the 150 million thermal boilers currently in use with heat pumps. An increasing number of large-scale heat pumps will supply either steam or hot water to district heat networks, as is currently done across Norway, Sweden, and Denmark. Writing climate-friendly building codes, using recycled material in building construction, installing state-of-the art insulation, and ramping up energy conservation could further boost energy savings.

The German think tank Agora Energiewende estimates that a widespread conversion to residential and industrial heat pumps, combined with efficiency measures, could cut EU natural gas use by 32 percent in five years. Together with increased liquid natural gas supply, this could completely obviate Europe’s need for Russian gas. And as advances in industrial-scale technology enable heat pumps to reach temperatures of 500 degrees C (932 degrees F) in the near future, the think tank predicts, electricity may supplant gas even more broadly.

In a recently published paper, the International Energy Agency estimates that the EU could trim 60 billion euros off its gas imports if the bloc as a whole switched to heat pumps — for domestic, commercial, and industrial use. It contends that by 2050, heat pumps will meet most of the world’s heating and cooling needs.

EU and national incentives and subsidies are expected to accelerate European industry’s transition. Wienerberger, the brickmaker, for example, expects to pay 2.5 million euros to 3 million euros a piece for new compression pump systems across Europe, of which subsidies will cover 20 to 40 percent of the costs. They will run on electricity generated by solar panels.

As for the United States, which relies largely on fossil fuels for heating, one reportshows that the expansion of domestic heat pumps in single-family homes could slash emissions by 142 million metric tons per year, reducing energy sector emissions by 14 percent. For U.S. homeowners, a standard air-source heat pump runs between about $3,500 to $7,500. President Biden’s Inflation Reduction Act provides subsidies and tax credits of up to 30 percent of a domestic heat pump’s price (or more for low- and moderate-income households). The Act authorizes incentives for industrial facilities as well. But for many in the U.S., the investment costs are still a major obstacle, even with the subsidies.

In Europe, though, enthusiasm for this technology — in homes, commercial buildings, and industry — is conspicuous. In most places, there’s a year-long wait to have a heat pump installed.