Understanding The Difference Between Faith And Belief

by Kedar Nath: Faith can move mountains; we have all heard… 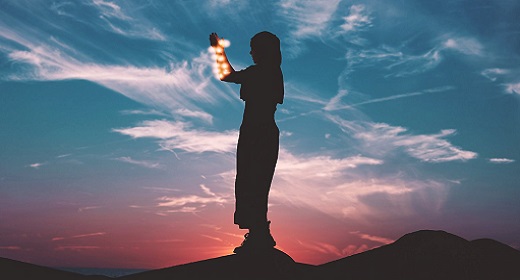 And it can. By faith weakness becomes strength, confidence overcomes fear, vice transforms into virtue and crises turn into opportunities. Faith is that crystal sphere which reveals the positive in all that is negative, if only we are willing to look.

Faith is beyond rationality, past the deluded voice of the logical mind which requires everything to be verified. It remains beyond the thirst of the heart which needs everything to be felt. Faith belongs to the luster of the soul, which demands nothing yet becomes everything.

Rationality and faith are not opposite in essence. In fact, it is wise to transform blind faith into wise faith through understanding and discrimination. No true progress is possible without faith. If the wind of reason flickers the flame of our faith, it in turn glimmers our fire of determination by evoking doubt. If faith does have an opposite, that is doubt. Doubt is that terrible feeling which fills us with uncertainty, one with which we can never accomplish anything flawlessly. Excellence can only sprout from a seed of faith. Faith roots us to the ground through the center of our being with a firmness that can eclipse all uncertainty right out of existence.

FAITH AND THE SUBCONSCIOUS MIND

Faith is the supreme and greatest of all emotions, because when we find ourselves in a state of faith, we essentially convey to our subconscious mind that everything is going to be ok. Anxiety, worry and doubt; the three deadliest obstacles to all forms of growth are sent to the mental fire of dissolution. We become empty and void, of all thoughts and prejudices, thus allowing the light of faith to fill our being and reverberate through our mind. We open our minds, to the people and the world around us, to new possibilities and new paths which had never been visible to us before.

Faith and belief are terms which are often thought of as analogous, but they have nothing to do with one another. In fact, they principally oppose each other.

We tend to confuse faith with loyalty. Loyalty to a certain doctrine, system or religion. Allegiance to prescribed ideals which systematically pilot our lives. A fidelity, which belongs to the sphere of belief rather than faith.

Belief systems bind us to set ideals and principles; faith liberates us from all ideals and limitations, even the mental constructs we have so adeptly yet so unintentionally created for ourselves.

Believing is founded on the concept of knowing and faith is founded on the experience of unknowing. The very core of faith is in the understanding that we represent a minor, almost meaningless fragment of the entire cosmos, and ultimately, we are only temporary characters in the ceaseless film of the cosmic screen.

Faith provides us with an unswerving focus. It can make us do incredible things; an indispensable requirement for the much needed inner revolution.

Some of the most atrocious acts in the history of mankind have been committed in the name of belief: religion. Great wars which have changed the course of history can be reduced to just one phrase: “my belief is superior to your belief.” Battles led by demented people, each thinking they hold the only version of the ultimate truth. Sadly, it continues today.

But there can be no conflict between people of faith, because the vary basis of faith is an awareness of not knowing. And nobody every started a fight because they knew less than another.

Believing is an action, it something we do and faith is a state, it is something we become. Faith cannot be cultivated or induced; it can only occur.

Beliefs are conditions. They insist that the truth is what one wishes them to be, either by one’s own logic or the transmission of others’ preconceived ideals. The belief system must fit our principles, or our principles must fit the belief system. They bind each other, with a rope so tight, its tension breaks away all possibility of exploration.

Faith however, is an unreserved opening of the mind to the absolute truth, whatever this may turn out to be. It contains no colors, no presumptions. Essentially, faith is a ticket to the mysterious museum of the Universe, where we hope to get a glimpse of celestial art. A dive into the unknown, knowing ultimately, everything will be just fine.