A Miracle In The Pueblo

by Lillian Firestone: Dancing for rain under a cloudless sky… 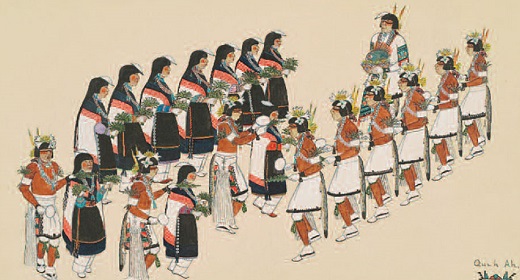 I had once seen people bring rain. We both [the author and her daughter, Risa] had. Camping in the Four Quarters region of Arizona, we heard that a Corn Dance would be held at a Hopi pueblo. That summer had been punishingly hot and dry—the corn crop on which the subsistence farmers of the pueblo depended was endangered by the continued drought. Weather forecasts predicted no relief, so the Hopi elders scheduled a special dance to call the rain, on a day in the middle of August.

We got on the road well before dawn and arrived at one of the pueblos that made up the Hopi nation. It was deserted, not a car or pickup to be seen. The Hopi had deliberately announced the wrong pueblo to deter tourists—particularly an American brand that ran amuck at sacred dances and desecrated open-air holy sites.

Driving from one pueblo to another, we finally found the right village, Santa Ana, and parked amidst the scruff of dusty half trucks and old sedans that jammed together outside the town square. Finding a space to squeeze in on the temporary wooden bleacher set up in the central plaza, we were still early and waited silently for the dancers. With the sunrise they appeared from far away, slowly approaching the plaza, pounding the rhythms we would hear all day long. Representing the four directions they came, each clan dancing in order from the elders to chiefs, clan mothers, the middle-aged, then young adults, teenagers, and finally children, each gorgeously arrayed in their finest buckskins, turquoise, coral, and silver jewelry, their ankle bands of conch shells marking every step like the murmuring of hundreds of muted drums. Together they stepped, spun, and chanted in perfect unison, in a complex design that was impossible to anticipate. After the sun was well up the heat increased from uncomfortable to insufferable but as long as the dancers continued, we agreed not to move, get up, buy soda, or otherwise disrespect their activities. By noon, a major effort was felt in the plaza—from the dancers and the mostly Indian spectators, with a rustling of paper fans, sips of bottled water, the crying of babies: there was no shade.

One young Indian man danced from dawn, carrying the sacred tree, the Tree of Life, a sapling about twelve feet high stripped of branches and topped with sacred symbols—fir twigs, feathers, pelts, other objects. The young man bore it upright, resting it in a holster slung around his hips (trees are heavy). He danced with this huge burden and never missed a beat. I wondered how he could keep dancing hour after hour in that heat. Around one p.m. in the afternoon, as he must have been tiring, a skinny old man in worn jeans danced up to him and took over the sacred tree. He didn’t have a holster, and seemed amused by the lightness of the trunk. Bouncing it on his open palm, he danced away with it.

“That old man is someone,” Risa said. Maybe he was a clown in one of the secret clans of the pueblo or an elder, a medicine man. By three in the afternoon, the suffering of the dancers and spectators seemed unsupportable. Maybe it was easier to dance than to sit motionless and watch, but drumming and chanting continued relentlessly and we had vowed to stay to the end. Then suddenly a gust of cool air, the sky darkened, and out of nowhere it began to rain.

How could it possibly rain during a drought out of a completely cloudless sky? The Hopi had called the rain, with prayers, with chanting and tobacco, and it had answered them. Amid general rejoicing, the dancers continued for a while, the rain streaming down their faces until one old man called a stop by carrying a large watermelon into their midst. Smashing it with one blow, he distributed broken-off chunks to all the dancers. Bread appeared, jagged pieces shared with everyone, even with we uninvited strangers. The ceremony was over. The pueblo had prayed for rain—and the rain had heard. It had been called, and it had to obey.