The Surprising Benefits Of Meditation For Brain Health

by Lesley Alderman: Regularly setting aside time to focus your thoughts can really pay off—especially as you get older… 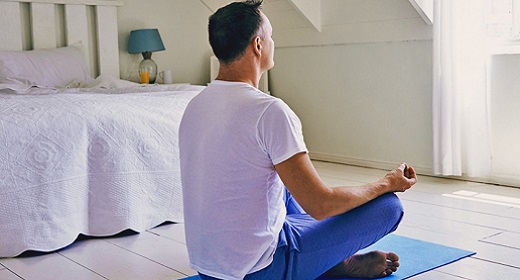 editation has been moving out of yoga studios and Ashrams and into the mainstream. Bill Gates meditates, so do Derek Jeter, Arianna Huffington, and Oprah. You probably know a few devoted meditators. You might even be one yourself.

The number of Americans who say they meditate for better health or wellness increased threefold from 2012 to 2017, from 4.1% of adults to 14.2%, according to the Centers for Disease Control and Prevention. And folks age 45 to 64 are the most likely to say they practice regularly.

Middle age can be a perfect time to start meditating,” says Lodro Rinzler, an author and meditation teacher in New York City. “You have an awareness of your mental patterns, and perhaps a readiness to change them.”

Here’s why you might want to work meditation into your routine, and what you can expect as you get started.

The far-ranging benefits of meditating

There’s a lot of hype about what meditation can do, but it has one undeniable benefit: more clarity. In addition, research consistently shows that a regular practice may be helpful for depression, chronic pain, and anxiety.

Studies have also documented that meditation can increase your gray matter and help slow some of the natural age-related atrophy of the brain. Regular meditators report feeling calmer, happier, and better able to deal with stressful situations.

What it really means to meditate

What, exactly, is meditation? There are many varieties of meditation, but they all share a common theme: to train the mind to stay in the present, either by focusing on the breath, a mantra, or on your passing thoughts.

The purpose is to help you change your relationship to your thoughts, so that you are not consumed by them and your mind is more spacious and quiet.

It’s normal to let wild thoughts run your life. Meditators, over time, feel less caught up by every random idea.

“Meditation changes how you think about things,” says Sara Lazar, a neuroscientist with Harvard Medical School. “Over time you come to see the way your mind works and begin to make new choices.”

Meditate for a bigger brain?

A regular practice can literally change your brain for the better. Lazar has been conducting research on the brains of meditators for over a decade; she’s particularly interested in how meditation effects the aging brain.

One of Lazar’s first studies, which was published in 2005, examined the brains of people who had been meditating regularly from 3 to 28 years and for about 40 minutes a day.

She found that these serious meditators had more gray matter—brain tissue comprising cell bodies and nerve cells— in several key areas of the brain, including the prefrontal cortex, when compared to a similarly aged non-meditators.

Gray matter tends to shrink with age, but Lazar found that the 50-year-old meditators in the study had just as much gray matter as those who were 25, leading Lazar and her co-authors to posit that “meditation might offset age-related cortical thinning.”

Why you may feel less stress

But novice meditators also benefit. A later study co-authored by Lazar and published in 2011, studied a group of individuals who meditated regularly for just eight weeks.

It found that the subjects’ brains thickened in several key areas, including the hippocampus, which is associated with learning and memory, and the temporo-parietal junction, an area that processes empathy and compassion.

What’s more, the meditators’ amygdalas, the part of the brain that’s associated with the fight or flight response, actually shrank, which is likely why the meditators reported feeling less stress overall.

More recently, a 2014 paper reviewed 12 studies that investigated the effects of meditation on cognitive decline. The review reported that meditation can have positive effects on attention, memory, executive function, processing speed, and general cognition.

The authors concluded that “meditation techniques may be able to offset age-related cognitive decline and perhaps even increase cognitive capabilities in older adults.”

How to get started

Ideally, you want to learn from a seasoned, well-trained teacher, who can provide guidance and help you over come common stumbling blocks. You can find classes at your gym, YMCA, or yoga studio. Or search for a local meditation center: If you’re in a modest-sized city there’s likely to be one nearby.

If you’d prefer to train yourself, try using an app. Headspace is the most popular (it’s the one that Gates used to get started), but there are many others, including 10% Happier: Meditation, Calm, and Insight Timer.

Download a few and see which one resonates with you. All offer free trials (after that, subscriptions can run from about $60 to $90 a year) or don’t charge at all.

Experts recommend starting with a few minutes of meditation and working up to 30 to 40 minutes of regular practice.

Be patient. At first you may feel fidgety, uncomfortable and bored. “Progress is slow, steady, and cumulative,” says Rinzler, who is also the co-founder of MNDFL a New York City meditation studio which offers classes throughout the day at three locations. “It’s like learning to play a musical instrument.”

And remember that even short meditation sessions can have an impact. Gates admits he meditates for just 10 minutes a few times a week. “I now see that meditation is simply exercise for the mind, similar to the way we exercise our muscles when we play sports,” he wrote on his blog.

“For me, it has nothing to do with faith or mysticism. It’s about taking a few minutes out of my day, learning how to pay attention to the thoughts in my head, and gaining a little bit of distance from them.”