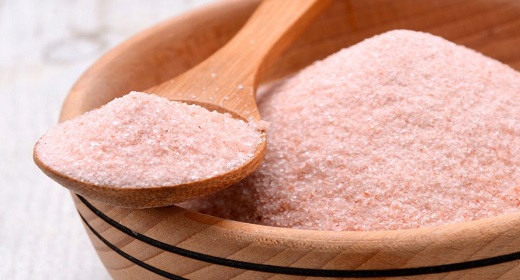 The fact is that refined white salt, such as commercial table salt is bad, very bad stuff. Unrefined natural salt on the other hand is good, very good stuff providing many health benefits.

Unrefined sea salt is healthy. The blood-pressure-raising effect of table salt can be due to its high content of sodium with not enough magnesium to balance it. This has a magnesium-lowering effect that can constrict the arteries and raise blood pressure. Real salt (of various kinds) contains plenty of magnesium and other important minerals, which is why it usually does not affect blood pressure in a negative way.[1]

Sodium is an essential nutrient required by the body for maintaining levels of fluids and for providing channels for nerve signaling. Some sodium is needed in your body to regulate fluids and blood pressure, and to keep muscles and nerves running smoothly.

Without appropriate amounts of sodium, your body may have a difficult time cooling down after intense exercise or activity. When the body is hot, you sweat. If you do not have enough sodium, your body may not sweat as much and you may then become overheated. This could result in a stroke or exhaustion as well as dehydration.

Sodium is an energy carrier. It is also responsible for sending messages from the brain to muscles through the nervous system so that muscles move on command. When you want to move your arm or contract any muscle in your body, your brain sends a message to a sodium molecule that passes it to a potassium molecule and then back to a sodium molecule etc., etc., until it gets to its final destination and the muscle contracts. This is known as the sodium-potassium ion exchange. Therefore, without sodium, you would never be able to move any part of your body.

Excess sodium (such as that obtained from dietary sources) is excreted in the urine.[2]Most of the sodium in the body (about 85%) is found in blood and lymph fluid. Sodium levels in the body are partly controlled by a hormone called aldosterone, which is made by the adrenal glands. Aldosterone levels determine whether the kidneys hold sodium in the body or pass it into the urine.

Dr. David Brownstein weighs in heavily on this matter saying, “Nobody makes a distinction between unrefined and refined salt. They ‘lump’ all salt together as a bad substance. This is a terrible mistake. There are two forms of salt available in the market place: refined and unrefined. Refined salt has had its minerals removed and has been bleached to give it the white appearance that we are accustomed to seeing with salt. It is the fine, white salt that is available at almost any restaurant or grocery store. Refined salt has been bleached and exposed to many toxic chemicals in order to get it to its final product. It has aluminum, ferrocyanide, and bleach in it. I believe this refining process has made it a toxic, devitalized substance that needs to be avoided.”

“Unrefined salt, on the other hand,” Brownstein continues, “has not been put through a harsh chemical process. It contains the natural minerals that were originally part of the product. Its mineral content gives it a distinct color. The colors of unrefined salt can vary depending on where it is taken from. This is due to the changing mineral content of the various brands of salt. It is the minerals in unrefined salt that provide all the benefits of this product. The minerals supply the body with over 80 trace elements needed to maintain and sustain health.

Furthermore, the minerals elevate the pH (correct acidity) and lower blood pressure. Our maker gave us salt to use in our diet—unrefined salt—with its full complement of minerals. It should be the salt of choice. It is a vital ingredient that needs to be part of everyone’s diet.”

Dr. Brownstein says, “Years ago salt manufacturers decided that pure white salt is prettier than off-white salt and that consumers prefer pretty white salt. So they started bleaching it. They also added anti-clumping agents to increase its shelf life. The problem is that the chemicals added to keep salt from absorbing moisture on the shelf interfere with one of salt’s main functions: to regulate hydration in your body. The sodium chloride in table salt is highly concentrated, denatured, and toxic to your body. Ever put salt on an open cut? It burns!!!

Refined salt has the same effect on internal tissues and causes a negative reaction: your body retains water to protect itself, and your cells release water to help dilute, neutralize, and break down the salt. This loss of water dehydrates and weakens your cells and can even cause them to die prematurely. Natural sea salt is far superior to chemically-treated iodized table salts as it contains all 92 trace minerals, and it’s only 84% sodium chloride while table salt is almost 98%”.

All this adds up to one thing. Table salt, whether marine or not, is toxic—it’s poisonous to the body and is responsible, in great part, to the onset of many terrible diseases including thyroid and metabolic dysfunction.

In addition to sodium and chloride, Celtic Sea Salt® provides other nutrients that naturally occur in salt beds, including trace amounts of calcium, magnesium potassium, iron and zinc.

In accordance with standards set by The World Health Organization and the Food and Agriculture Organization, independent analysis indicates that levels of heavy metals are non-detectable (e.g. arsenic, cadmium, mercury) or well below published safe limits in Celtic Sea Salt®. Perhaps most importantly, Celtic Sea Salt® is not exposed to refinement and bleaching used to manufacture typical table salt and there are no additives. Celtic Sea Salt® is harvested from the ocean using the sun, the wind and shallow clay ionizing ponds, a method passed down through the generations.

Many Americans over consume refined salt by eating processed foods, fast foods and canned foods with salt added. Celtic Sea Salt® is a good alternative as part of a healthier diet. Recommended use is a half teaspoon per day.

Himalayan crystal salt that is mined 5,000 feet deep below the Himalayan mountain range was subject to enormous pressure over millions of years and is over 99% pure. The higher the amount of pressure the more superior or excellent the state of order within the crystalline structure of salt. Many Himalayan salts are sold cheaply but are collected from higher up near the tops of the Himalayan Mountains instead of from the deeper mines. These salts contain more impurities, do not have the same structure and are not as easily assimilated by the body.

Himalayan salt contains 84 minerals and trace elements in ionic state and is a delightful pink color. People often state that they use less of this salt than of other types. Many sizes are available from 3 oz in a salt grinder to larger 1-kg bags (2.2 lb). Salt chunks are also available for making your own “sole,” which is a saturated solution of purified water with Himalayan salt. A specific recipe (see below) must be followed to make sole and results in a solution that has much less sodium than just adding salt to water would have. Daily use of sole is believed to stimulate the peristalsis of the digestive organs, balance the stomach acid, support the production of digestive fluids in the liver and pancreas, regulate the metabolism and harmonize the acid-alkaline balance.

Start Each Day with a Healthy Sole

The ideal way to use Himalayan Crystal Salt is in the form of a sole (so-LAY). Drinking the sole when you awake each morning is like getting up on the right side of the bed. It provides the energizing minerals you need daily to recharge your body, and it helps set the stage for a day of vitality.

Essentially, a sole is water saturated with Himalayan Crystal Salt. The sole contains about approximately 26 parts of salt to 100 parts of water. Prepare the water and salt combination in advance (see directions to the right). Each morning place a teaspoon of the sole mixture in a glass and fill with 8 ounces of pure spring water. Drink it immediately or sip it while getting dressed, checking emails or preparing breakfast. The water helps transport the electrolytes throughout the body to all the many places they are needed.

How to Prepare Sole

Cover the salt with two to three inches of pure, spring water. Let the salt dissolve for 24 hours.

Cover the container to prevent the water from evaporating. Since salt is a natural preservative, the sole will keep forever. It can’t spoil or go “bad.”

The vibrational energy of the Himalayan Crystal Salt remains in your body for 24 hours.

Redmond Real Salt is mined in the United States and is another good unrefined salt that I also recommend. It can be used as a table salt and for cooking and is available in coarse and fine grinds and in a variety of sizes.

Real Salt comes from a mineral rich salt deposit formed by an ancient sea in Utah. It contains 62 trace minerals, and is without additives, chemicals, or heat processing of any kind. Real Salt’s unique pinkish appearance and flecks of color come from the more than 60 naturally occurring trace minerals. The result is a delicate “sweet salt” flavor that you may not have experienced before.