by Emma Thomson: A viable philosophy or government propaganda? 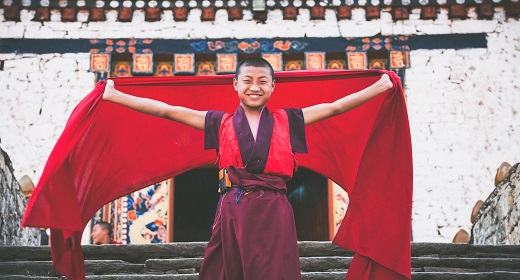 Bhutan is often praised for measuring its worth by citizens’ happiness alongside its economy, but can a country really calculate happiness—and if so, how?

I’m meandering along the world’s friendliest road. Hand-painted boulders remind drivers to “peep peep, don’t sleep,” and, a few hundred meters later, “mountain of pleasure, if you drive with leisure.” And instead of saying ‘back off’, the bumper sticker of the truck in front of us politely reads: “Don’t kiss me.”

Bhutan is famously the only country in the world to rank Gyalyong Gakid Palzom, or Gross National Happiness (GNH), above GDP. Everything—from governance and economic development to cultural preservation and environmental conservation—is decided according to this holistic tenet, designed to measure and protect the collective happiness and wellbeing of the population. When the UN General Assembly passed the resolution in 2011, it praised Bhutan and urged other members to follow suit.

But how does a country measure happiness and what’s it like to live that philosophy? 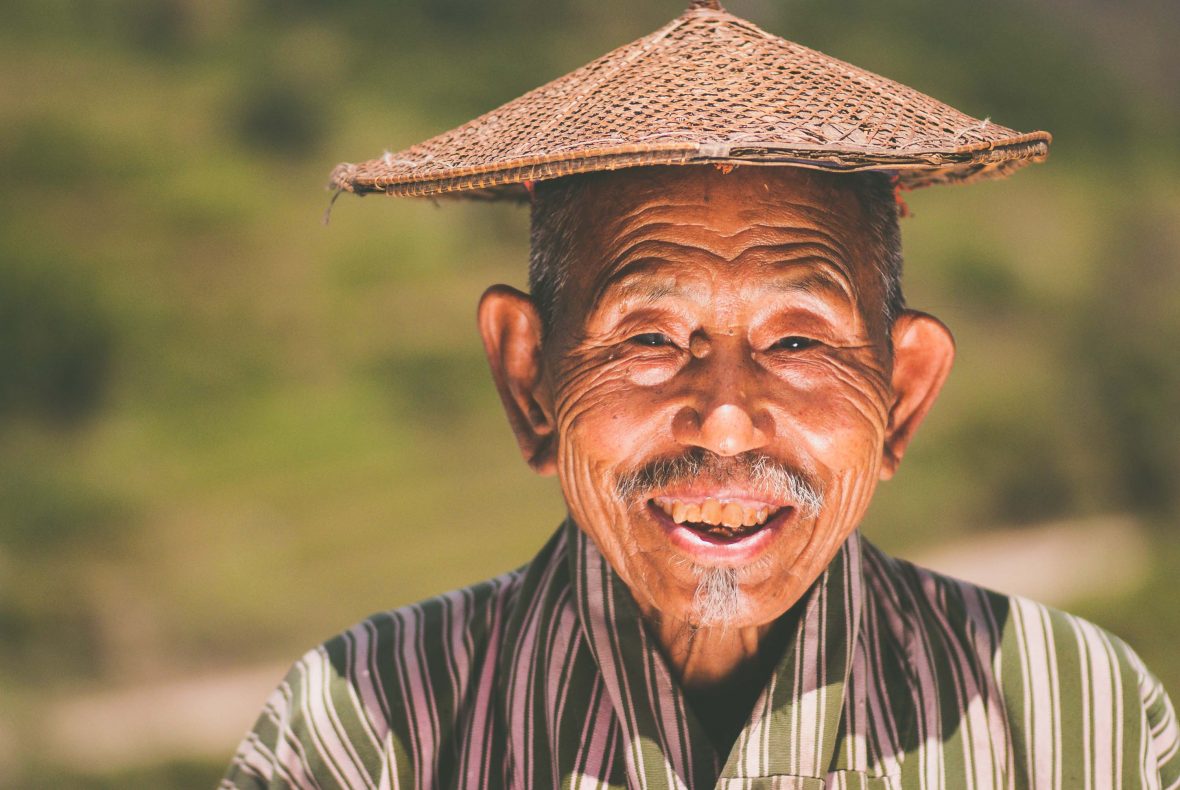 Gifted’ to the people by former King Jigme Singye Wangchuck in 2008, the philosophy, unique to the Land of the Thunder Dragon, is put into practice using a 30-page questionnaire that delves into the nine domains that are believed to contribute to a person’s happiness —psychological wellbeing, health, education, time use, cultural diversity and resilience, good governance, community vitality, ecological diversity, and resilience and living standards.

Participants are asked questions, such as: How often do you recite prayers or meditate? How satisfied are you with the relationship you have with your immediate family members? How many people close to you can you count on if sick, or if having financial problems? And how free do you feel to express your ideas and opinions?
Since its inception a decade ago, the census has been taken three times, with the last one in 2015. Over five months, 7,153 Bhutanese were interviewed across the country and it was concluded that GNH has grown significantly from 0.743 in 2010 to 0.756 in 2015, showing “overall people’s lives are getting better” and that “a total of 91.2 per cent of Bhutanese were narrowly, extensively, or deeply happy” (GNH Survey Report).

“In my opinion, GNH means being satisfied with what you have … It’s the human condition to never be satisfied. The goal is to try and be satisfied.”

Trouble is, at that time Bhutan’s population stood at 787,386, meaning just 0.9 per cent of inhabitants were surveyed. That’s a very small sample. It raises questions on whether GNH is actually a viable philosophy or just propaganda.
The Bhutanese government argues the philosophy acts as ‘a compass towards a just and harmonious society’ and the questionnaire identifies gaps in happiness—such as that men tend to be happier than women, and urban, educated residents tend to be happier than rural citizens—and where they can improve amenities to re-address the balance. Ironically, though, Bhutan ranked 97 out of 156 on the 2018 World Happiness Report although they attribute this to the survey measuring happiness only via material wealth.I ask my guide, Sonam Pelden, what he thinks as we join the thrum of locals circling like honeybees around the Memorial Stupa in Thimphu, built in 1974 in remembrance of Bhutan’s third king. The elder generation are dropped off by their kids with a packed lunch and spend the day here, spinning the prayer wheels and touching their prayer beads. “It becomes a community which makes them happy,” says Sonam.
In many ways, GNH seems a natural extension of the Mahayana Buddhism that 75 per cent of the population follows. “In my opinion, GNH means being satisfied with what you have,” Sonam says. I’d noticed the large camera resting on the back seat of the car he used for his birdwatching. “But you still want the latest camera and new lens,” I tease. “Good point,” he says, laughing, “but that’s because we’re human—it’s the human condition to never be satisfied. The goal is to try and be satisfied.” After a few paces, he adds: “Sadness will always be there, so GNH helps keep the balance. Perhaps GNH is better defined as ‘development with values’.”
We embark on another tour around the stupa. “Plus, when we speak of happiness, it’s for all the people, not just the individual,” says Sonam. “The poorer farmers don’t mind because the service they provide supports the community. In many ways, they’re richer than us because their lifestyle provides everything they need.” And yet the GNH Survey Report noted: “Farmers are less happy than other professions,” highlighting something of a disconnect between perception and reality.
I ask Sonam how happy he thinks his fellow countrymen are. “I’d say about 85 per cent,” he replied. While that may be somewhat optimistic, the ‘unhappy’ 15 per cent is likely to include Nepalese inhabitants. In the 1990s, around 100,000 Hindu Nepalese—about 28 per cent of the population—were forcibly expelled from Bhutan after pushback over the 1989 royal decree made it mandatory to wear the national costume. For men, that means the knee-length gho (robe), and the sari-style kira (skirt) and tego (jacket) for women. (Today, it’s only compulsory in schools, monasteries, and government offices). Nepalese-led attacks resulted in the deaths of some officials and King Jigme Singye Wangchuck authorized an anti-immigrant drive. It demonstrated the near-absolute power the king wields and overall, this raises issues of freedom of expression. Bhutan has a ban on smoking, tattoos, and the sale and consumption of alcohol on Tuesdays. Furthermore, negative statistics such as the rise in cases of Aids and tuberculosis are suppressed.
But are such restrictions necessary? This is a country that only built its first road, established its postal service and migrated formal education from the monasteries to the classroom in the 1960s. That founded its banking system ‘BoB’ (Bank of Bhutan) in 1968. And, after trialing traffic lights in the capital Thimphu, went back to using hand-waving police because “people didn’t get it.”

Happiness is a slippery state of being—by its very nature, it comes and goes. Trying to achieve it on a countrywide scale, then, may seem naïve; even impossible.

During my final days in Bhutan, I lodge at a homestay in the remote Haa Valley. Jigme, my host’s 10-year-old nephew, shows me how to whizz down the wooden bannisters and later, at dinner, he shuffles across the wooden floorboards to sit next to me. I ask what happiness means to him. “Happiness is when you make something to share with others,” he replies, rather profoundly, before changing the topic to discuss his love of David Beckham.
But can Bhutan share its model with other nations? “It works because our country is small,” says Sonam. Randy Durband, CEO of the Global Sustainable Tourism Council, agrees: “For practical reasons, few nations could follow their model because of Bhutan’s dramatic isolation. Perhaps a small destination could follow it, but not entire nations.” Of course, happiness is a slippery state of being—by its very nature, it comes and goes. Trying to achieve it on a countrywide scale, then, may seem naïve; even impossible. Sceptics may accuse Bhutan of practising rose-tinted politics, yet their government has never denied the importance of GDP—rather, they rearranged its position in the hierarchy of needs. Bad news always beats good to the headlines, and so too is it easier to pick holes in and argue about a fledgling do-good philosophy. As Sonam freely admits: “It’s complicated, but at least they’re trying a new model.” And in today’s increasingly fractured political and social landscape, perhaps this is an argument that’s worth having.