Amal Clooney Is The Feminist Role Model We Need

by Victoria Christie: Last week, my 16-year-old cousin and I attended Amal Clooney’s talk at the Luminato Festival in Toronto… 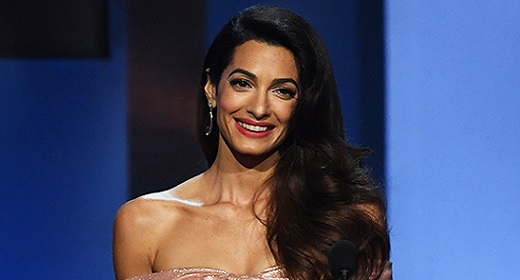 and we fangirled hard. In fact, we barely made it out of the theatre before bursting into a back-and-forth discussion about how much we admired the British-Lebanese human-rights lawyer, who shared the stage with her father-in-law, American journalist Nick Clooney, for a wide-ranging conversation that touched on feminism, gun control, the necessity of free press and the refugee crisis.

We were not only impressed by her badass accomplishments—though helping free a politician in the Maldives and liberate a woman from ISIS militants are both very badass—but completely inspired by the way she embodies modern womanhood: she’s a feminist and style icon whose work is never (okay, hardly ever) overshadowed by her famous husband.

But as enthralled as I was by Amal’s dedication to helping others, the talk had an even more important impact on my cousin.

As a young woman of colour (she was born in China and adopted into a white family in Toronto), my cousin related to Amal on many levels. They share a passion for human rights activism—my cousin’s dream is to become a human-rights lawyer—and after seeing Amal in person, she felt more empowered than ever to pursue a career in advocacy.

Also like Amal, if my cousin remained in the country where she was born, she would have led a very different life than she does today.

“I am a refugee,” Amal told the audience. “I am so grateful that I was able to enter a country that showed compassion towards that community. I wish that were happening in more places around the world.”

Amal’s feminism is transnational and intersectional

Amal also talked about what feminism means to her—and reminded the audience that feminism doesn’t look the same to every woman. That’s something she knows intimately thanks to her work; many women around the world are still fighting for basic human freedoms, like the right to work, own property and drive a vehicle.

This reaffirmed to both my cousin and I that we are truly privileged to be living in Toronto—and it left us feeling empowered to use our privilege to uplift other women. Especially when it came to Amal’s next point. Despite the geographical borders that divide us, she says, the one thing that affects and connects us all is gender-based violence.

Like many millennials, my cousin and I are worried that we don’t do enough when it comes to activism—especially right now, when women’s reproductive and equal rights are constantly being threatened. But as young feminists, seeing Amal continue to put in the work to empower women is truly admirable.

One particularly inspiring example: Amal played a crucial role in freeing Nadia Murad, a Yazidi woman who was sexually enslaved by ISIS in 2014. She was taken from her home in Sinjar, Kurdistan as a 19-year-old and was one of 6,500 Yazidi women held captive for over eight months. Yazidi women like Murad are particularly vulnerable to sexual slavery and assault from ISIS because militants regard Yazidis as devil worshippers.

Taking on Murad’s case is just one example of how Amal has helped women facing injustice—and after hearing her speak about her work, my cousin knows for sure that she wants to do the same.

My cousin and I are at opposite ends of our teen years. She’s just entering one of the most challenging and important periods of her life, whereas I’m leaving those years behind. That’s why it’s a relief to know that she has someone so inspiring to look up to who is not only known—and praised—for her celebrity, but for her feminist activism.

Case in point: In between fangirling over Amal and talking about how empowered we felt after hearing her speak, we actually forgot that she’s married to George Clooney… and that’s pretty awesome.