One Root Cause of Pandemics Few People Think About 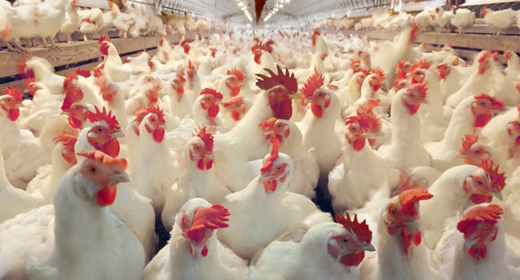 It’s easy for those of us in the Western world to shake our heads at the live wildlife markets in China that appear to be the origin of the coronavirus pandemic now paralyzing the globe. Easy, that is, since such a practice is so literally quite foreign to us. (In their defense, at least, China has now banned such markets.)

But what’s more difficult is to be honest with ourselves about what kinds of pandemics we may be brewing through own risky animal-use practices. And while the new coronavirus, crippling as it is, might have a somewhat merciful case fatality rate (proportion of those infected who die) of less than 1 percent, we know that this catastrophe may be just a dress rehearsal for an even more serious pandemic that could take a more gruesome toll—akin to the 1918 global flu pandemic, which originated in Kansas and killed at least 50 million people.

When that day comes, it’s very likely that such a virus will also have its origin in humanity’s seemingly insatiable desire to eat animals, whether wild or domestic. The conditions in which we often farm animals today—crowding tens of thousands of animals wing-to-wing or snout-to-snout—serve as “amplifiers” for viral pandemics.

Indeed, the H1N1 swine flu outbreak of 2009 appears to have originatedin a pig confinement operation in North Carolina. And while the H5N1 bird flu outbreak in 1997 evidently originated in Chinese chicken farms (case fatality rate 60 percent), a similar bird flu in the U.S. just five years ago led American poultry farmers to kill tens of millions of their birds to contain the outbreak, which thankfully never made the jump into the human population. And at this very moment, both India and China have announced bird flu outbreaks among their chicken factories. Similarly, these are not yet affecting human health.

But you can only play viral Russian roulette for so long, which is why public health experts concerned about zoonotic diseases have for years been ringing the alarm about the industrial farming of animals. Michael Greger, author of Bird Flu: A Virus of Our Own Hatching, calls factory farming a “perfect storm environment” for infectious diseases. “If you actually want to create global pandemics,” he warns, “then build factory farms.”

In fact, in 2007 an editorial in the American Journal of Public Health was published on the topic, worrying that our mass-raising and slaughtering of animals for food could be the genesis of the next big global pandemic. Given the connection between industrial animal agriculture and pandemic risk, the American Public Health Association journal editorial observed: “It is curious, therefore, that changing the way humans treat animals—most basically, ceasing to eat them or, at the very least, radically limiting the quantity of them that are eaten—is largely off the radar as a significant preventive measure.”

In 2007 such a prescription might have seemed off the radar as it would have appeared simply too unrealistic. Today, however, technological progress has made it easier to imagine taking the public health experts’ advice more seriously.

Yes, we humans may crave meat, but our conception of “meat” is now becoming far more diverse than in the past. Whereas “protein” was once synonymous with a hunk of flesh from a once-living animal’s body, today many Americans are embracing a type of protein diversity that celebrates meat from a variety of sources. And then there’s the “cultivated meat” field, where start-ups, often backed by major meat companies, are growing real animal meat from animal cells rather than from animal slaughter. This kind of meat isn’t yet on the market, but already many people—including this writer—have enjoyed it, and the federal government is preparing a pathway to commercialization.

Diversifying our methods of meat production would not only offer us a chance to reduce pandemic risk by cutting down the number of live animals we must raise for food, but it also could help mitigate numerous other risks as well. Whether the concern is climate change, antibiotic resistance, deforestation, animal welfare or more, the benefits of broadening our protein portfolio are manifold.

As we hunker down and weather the corona storm now hitting the world, let us take some of our downtime to contemplate that we have the power to reduce the chance of the next pandemic. Yes, we should curb wildlife markets, but let’s not stop there. If we have the will to shut down our entire society for weeks on end, surely we have the will to slightly change our diets.