by Laura Eraser: One writer explores the mysterious connection between the physical and spirit worlds—and finds healing in the process… 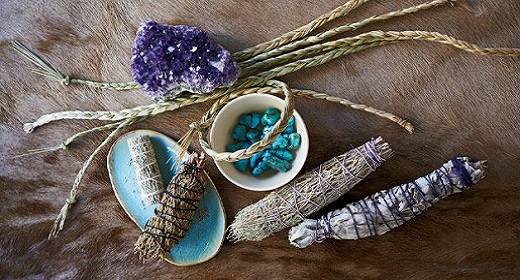 I was in San Miguel de Allende, Mexico, a few years ago for vacation and stopped by an outdoor bar with flowers climbing up the stone walls. I struck up a conversation with a couple, and while we chatted, the American woman told me she was taking time off from her job; the man, from Canada, said he used to be a high school math teacher. “And now?” I asked idly. He twirled the ice in his drink, reluctant to say more. “I took a workshop in shamanism, and now I practice shamanic healing,” he said. I raised an eyebrow.

“I’m able to see things in people—physical and spiritual things—and fix them,” he went on. He shrugged. “It’s just a talent I have.”

That sounded like a talent for hokum to me—the artsy, expatriate town of San Miguel de Allende is full of New Age types who will wave a crystal over you and remove your pesos—so I wanted to test him. “What do you see in me?” I asked.

“Your right hip,” he said immediately. “It was injured a few years ago, and it still hurts. The pain is deep down and doesn’t go away.”

I was stunned. “Do you know how it happened?” I asked.

He was right: Yes, I have a hip injury. And no, I didn’t want to get into it at all. In 2004, I was sexually assaulted in a foreign country; my attacker held down my leg, and I strained something deep inside my hip flexor trying to escape. Since then, no amount of massage, yoga, or acupuncture could alleviate the pain, and my doctor had no idea what was wrong.

“Can you fix it?” I asked. I wasn’t sure I believed he would be able to even if he said he could, but I was open to anything.

I left the bar with the pinch in my hip, but strangely and improbably, within a couple of weeks, the deep pain slowly disappeared for good. Perhaps it was a coincidence or the power of suggestion, but it made me curious. Maybe there was more to shamanism than meets the eye.

Once I began to read about and research shamanism, the first thing I learned was that most shamanic practitioners don’t go around healing people from a bar stool. For whatever abilities the man in Mexico had, his method was a little suspect. Shamanism is an ancient mode of spiritual healing that is present in cultures all around the world. True contemporary practitioners are highly trained and disciplined, says Susan Mokelke, president and faculty member of the Foundation for Shamanic Studies in Mill Valley, CA. In some cultures, shamanic practice is passed along in families, and in others, like ours, it is formalized in training sessions. “We’re very circumspect about ethics,” Mokelke says. “As with a therapist, you want to feel compatibility and a sense of trust.” Shamans don’t heal someone without permission; they respect privacy and make no promises about outcomes. They can’t, because, in their view, it’s the spirits that do the healing.

Shamanic practitioners work in the realm of spirits. They do not call themselves shamans; if one achieves success in shamanic healing, the community may name him or her a shaman. The basic worldview is that there is not just one reality; there is the generally agreed-upon physical reality we inhabit, but there are other invisible realms. Those are different for every visitor, filled with animated human, plant, and animal spirits. Shamans summon these to help heal people’s souls.

Shamans journey to these other worlds by going into a trancelike state, most often with the sounds of drumming. For some shamans, the journeys to other worlds are very visual—they wander through a landscape of beings—and others hear distinct sounds and voices from spirits. The closest the rest of us come to visiting the other realities is through our dreams, which shamans believe are full of information from the spirits. It all sounds a little far-fetched, a little woo-woo. But the shamanic practitioners I spoke with are serious professionals who describe their experiences with other realities very matter-of-factly. It’s like they’re describing another culture they’ve seen that I’ve never visited. It’s simply beyond my experience.

“I was trained as a lawyer, and at the beginning, I was always asking myself if this was real or if I was making it up,” says Mokelke about her shamanic training. “The experiences were powerful, and when I started doing shamanic healing and seeing little miracles happen, there was no way it wasn’t happening,” she says. “The truth is that there are other realities, and we tap into them.” I was intrigued. Mokelke is so practical and down-to-earth, I was compelled to take her perspective seriously.

Shamanic practitioners call on helping spirits in those other realities to heal people here by restoring their spiritual power. That power comes from a “whole” soul and the protection of compassionate spirits and power animals, which create a spiritual force field around us.

I understood that. I’ve sensed those mysterious moments of feeling protected. Recently, for example, I was driving when something made me suddenly brake at a green light; my passenger was asking why the heck I wasn’t going when a semi blew through the red light at a speed that would have killed us. From a shamanic perspective, I can thank my helping spirits for stopping me in my tracks.

Our spiritual force fields, shamans believe, become damaged as we go through life. Someone who, say, suffers a trauma may lose some of his or her soul—and personal power to ward away illness. The spiritual skin, as it were, has some holes in it, making the person vulnerable. Shamans can call on spirits to help restore portions of the soul. Mokelke says shamanic healing is part of a holistic system that works with other modalities, such as Western medicine. Richard McKinney, MD, a family practitioner at the University of California, San Francisco’s Osher Center for Integrative Medicine, says that over the years, a handful of his patients have tried shamanic healing. He is careful to make it clear to them that shamanism is “well outside of evidence-based medicine” but says he’s willing to discuss it as an option: “I’ve seen times when patients have benefited hugely from shamanism, which makes no sense from the perspective of conventional medicine. While I can’t explain these things, I like good results.”

Although shamans can see a physical illness such as cancer, infection, or depression, they attend to the spiritual aspect, i.e., the “disruption of spiritual energy,” says Cecile Carson, MD, a physician in upstate New York and editor of Spirited Medicine, an anthology on shamanic healing in contemporary health care. There are several types of spiritual illness. One is a loss of protection from helping spirits, which she says can result in issues such as chronic misfortune, recurrent colds, depression, and malaise. Another kind of spiritual illness is “soul loss,” in which some of a person’s life force leaves—perhaps as a response to a severe trauma or addiction. People’s spirits can also be harmed by intrusions—negative thoughts of their own or messages from other people. Whatever the type of spiritual illness, Dr. Carson says, addressing it can help people heal from isolation, guilt, or misery or allow them to open up to people in their lives. “I’ve seen some profound healing going on while the body is conking out,” says Dr. Carson.

For most of us who visit a shaman, though, the changes are less dramatic.

Typically, a shamanic session begins with the practitioner calling to the spirits while the client relaxes. “I ask my healing spirits what healing this person needs right now, and then I do what they tell me,” says Mokelke. “I’m not doing the healing; I’m the connection.”

I strongly sensed I could trust Mokelke’s competence, training, and compassion and decided to do a session with her. We met at her home on the San Francisco Peninsula, perched over a canyon, with a balcony that seems like a jumping-off point to the heavens. She asked if there were any particular problems I wanted to work on, and I told her about a painful, precancerous condition, messy cysts, and tumors.

Mokelke had me lie down on a mat and pillows on the floor of her healing room. I closed my eyes, and she began to shake a rattle. Over the next several minutes, she rattled and passed around me, occasionally touching me lightly.

At some point, she put on a drumming tape and did some chanting. She instructed me to be open to what I was feeling. At first I was skeptical, but I tried to let go. Gradually, I felt an intense heat gather in the region of my pelvis and radiate throughout my body. Then my entire body was filled with a pulsing energy, almost like a convulsion, and I felt calm and clean, emptied out. An overwhelming sense of gratitude—toward Mokelke, the spirits, or whatever energy was there—came over me like a warm light.

Mokelke blew over my heart and onto the top of my head and then spritzed me with water. The drumming and rattling stopped, I opened my eyes, and she told me what had happened. She said the room had been fairly crowded with spirits. She did a spiritual “extraction” of something in my pelvic region, which had entered because my soul was weakened. She also restored a portion of my soul that had gone missing. She told me that one of my power animals had returned (you aren’t supposed to reveal your animal because it’s sacred—if you reveal it, you could lose it) and what I should do to relate to it so it would stay with me for help and protection.

I left feeling restored, with a sense of renewed vision and appreciation of the world around me. I felt relaxed and more like myself. In the days following, I was a little brighter, cheerier, as if I’d had a long, relaxing vacation.

A few days later, I had a follow-up visit and biopsy with my gynecologist and found that my precancerous condition had cleared up. Maybe that was due to the medical treatment; maybe it was the shamanic extraction. I can’t be sure what happened in that little room, but I found myself compelled to sign up for a weekend workshop. There I’ll learn how to take a journey on my own—and maybe see for myself what’s really out there.

Finding a Shaman
It’s important to work with someone who has training, experience, compassion, an interest in healing, and strong ethical boundaries. Two places to start: The Foundation for Shamanic Studies and The Society for Shamanic Practitioners.