David Attenborough: Climate Change Must Not Be Ignored Even During A Pandemic

by Jeremy Blum: Environmental activists Attenborough and Greta Thunberg spoke together during a recent panel and had much in common, despite being 77 years apart… 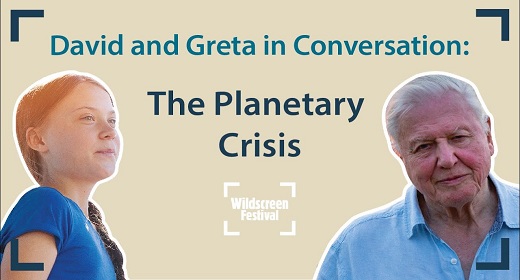 In a frank panel discussion alongside teenage environmental activist Greta Thunberg, legendary nature broadcaster David Attenborough said that he hoped the countries of the world would continue to keep the imminent threat of climate change in mind despite the pandemic that has dominated 2020.

“I am worried that people will take their eyes off the environmental issue because of the immediate problems they have on COVID,” Attenborough said on the panel, which was titled “David and Greta in Conversation: The Planetary Crisis” and part of Wildscreen Festival, a celebration of wildlife on film. “And of course it’s put off a series of conferences in which all the nations get together and talk.”

Attenborough, who called the COVID-19 pandemic a “disaster for all of us” in a podcast appearance earlier this month, was referring to conferences like the United Nations Framework Convention on Climate Change, which was originally scheduled for November 2020 in Glasgow but shifted to 2021 due to the COVID-19 pandemic.

Thunberg also stressed the importance of keeping climate change in mind, and despite their 77-year age difference, the pair had nothing but mutual respect for each other, with the elder statesmen of nature documentaries calling Thunberg’s activism efforts “absolutely astonishing.”

“You have activated young people around the world, all over the place, who are up in arms about whats happening,” Attenborough said to Thunberg. “And if there is any sign of hope, and there is, to be truthful compared to what there was 25 years ago, it’s because of what you’ve done and what you’ve done for young people.”

Thunberg, for her part, heaped praise on “A Life on Our Planet,” Attenborough’s latest film that is part biopic, part cautionary tale on the future of Earth.

“When I saw your newest film, I was positively surprised on how well it connected all of these different issues, like the climate crisis, loss of biodiversity, loss of fertile soil, overfishing and all these different problems piling up on each other,” Thunberg said. “We fail today so bad to connect these issues.”

Thunberg said that her own upcoming film — “I Am Greta,” which will premiere on Hulu on Nov. 13 — was in comparison more focused on her personal journey as an activist, which she saw as emblematic of the world’s “absurd reality that we are focusing on the individual, on activists … rather than actually seeing the problem.”

This brought Attenborough back to his point on COVID-19, international conferences and the tendency for nations to treat discussions of climate change like a bargaining table, with every politician looking out for their respective country’s priorities first and foremost.

“The world has to unite. It’s an era of internationalism, not nationalism,” Attenborough said. “ … If you’re faced with a crisis of the proportion of the epidemic they’re facing, it’s difficult to lift your eyes from immediate problems … But we have to do that, we really, really have to do that and I just think the future of the world depends on it.”