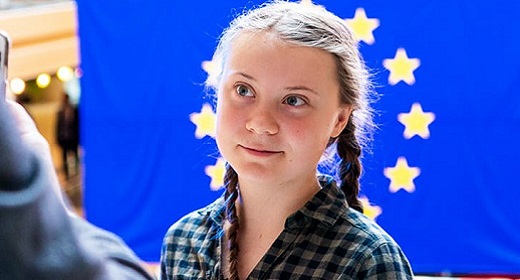 but as she told CBS News’ Adriana Diaz from her home in Stockholm, it was not for the reason people may think.

“I’m not doing that to lower my carbon footprint or something,” the 18-year-old environmental activist said. “I mean, that will be quite pathetic — it doesn’t really make much difference. But I’m doing it to send a message to the people.”

The message is that while individual actions are important, sweeping changes must come from governments and corporations in order to lower emissions and commit to renewable energy.

She once chastised a room full of world leaders at the United Nations Climate Action Summit. “You all come to us young people for hope. How dare you,” she said. “You have stolen my dreams and my childhood with your empty words.”

And at a climate rally in Britain, Thunberg told a crowd of young people that “World leaders are behaving like children. So it falls on us to be the adults in the room.”

At every opportunity, the teen pushes leaders to listen and follow the science. She points to the coronavirus pandemic as a model for swift action.

“There are some things that we can learn from the previous year,” she said.

“We can treat something like a crisis once we really decide to do it… we have also seen what can be achieved when we put resources into science.”

She used vaccines that were “developed at record speed” as an example.

“So the science is not the thing that’s holding us back,” Thunberg said.

Young activists, Thunberg points out, whose generation will be “affected the most by the climate crisis.”

“We will actually be around when the worst consequences will start to occur,” she said.