by Richard Greene: One year ago, today my wonderful father, Martin Sydney Greene, passed away, 8 days before his 87th birthday… 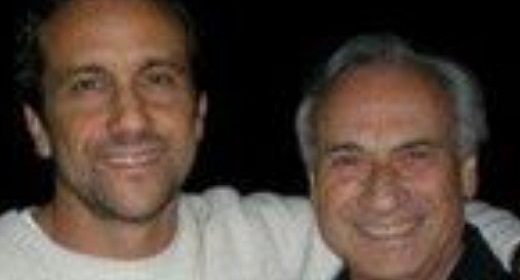 But what happened over the next few days would confirm to me that, indeed, neither my beloved father, or anyone, ever really dies, or goes away.

He not only told me and the family that he was ok, but that he was watching over us, that he “got it” that there IS, indeed, life after death (something he was ALWAYS skeptical about) and that he still has a tremendous sense of humor.

My father left us in the middle of “The State of The Union Address” in the early evening of Tuesday, January 20, 2015. I probably should have figured that was already his personality showing itself. He hated politics.

On Friday, I ask my assistant Michelle to go to my very full storage unit to see if she can find any black suits for me to wear at the funeral on Sunday.

She picks it up, opens it and texts me that she found some suits but also found a check for a rather large amount of money. When she brings it to me I see that it is a check for some thousands of dollars from a company – no kidding – with a name that starts with “ILLUMINATED”.

It happened to be a perfectly valid check that my partner and I had absolutely forgotten about, absolutely thought was already deposited and would absolutely NEVER have looked for, found or ever deposited.

My Dad was not one to believe in ghosts or extrasensory phenomena, but he, 1000%, believed in proper accounting, meticulously entering every entry in a checkbook and in not wasting money. I hold the check, look up in the sky, feel my father’s frequent refrain about being more organized about my money . . . and say “Thank You, Dad”.

But he wasn’t done.

Wednesday morning, the day after he passed, I get an email from a forensic psychologist who is looking for a public speaking coach (which is what I do for a living). I write her back and we arrange to speak on Friday, around the same time that Michelle is at my storage unit.

After interviewing 15 other public speaking coaches, she hires me and we start figuring out when to meet for the first session. Turns out she lives in Bakersfield, on the edge of a lake, an hour and a half away from LA, because she and her husband are competitive water skiers. (Waterskiing was our family sport and the catalyst for many, many beautiful memories when we were all younger.)

She then says that she comes into LA often and that her Mom works in an office in Los Angeles and that we can meet for the session there. I say “Great, let me know when you are next in town”.

On Monday, three days later, my new Bakersfield client calls, tells me she is coming into LA the next day and gives me the address of her Mom’s office for our 1/2 Day Session.

I go to the office with my remarkable Associate, my daughter Chiara, who was out in LA for the funeral, and an hour after we start the session a friendly, familiar looking man peers into the conference room, opens the door and, with great surprise, says, “Richard Greene, what are you doing here?!”

Turns out that this man, David, is the man who hired me to do the work for the ILLUMINATED company and was an investor in that company, thus providing some, if not all, of the money that was in the large check.

And that the building we were in and the floor that we were on and the very suite that we were in . . . were exactly the same building, the same floor and the same suite where I conducted the session for ILLUMINATED to earn the money that floated down from that very full storage unit in front of the feet of my assistant!

But my playful father was not done yet.

We finish the session, leave the suite and head downstairs in the elevator to the lobby. There, waiting in the lobby, directly in front of the elevator, is a middle aged Asian man who looks very familiar. Turns out this man is a salesman for a custom shirt company which has their store in the very same building . . . and was the very last man we saw, and the very last place my father and I visited on our very last trip outside of his house 1 and 1/2 months before he died so that he could buy me one of his favorite things, a custom made shirt, which he did as he slides his worn credit card to THIS man with his last words out in public . . . “Take care of my kid!”

The statistical odds of the check floating down, the waterskiing out of town client reaching out the day after his passing, the client’s mother working in the same suite where the check was earned and for the same man who funded that very check, running into the last man my father and I saw and did business with

all just days after my father’s death would have even made the living, skeptical Martin Greene take pause.

For me, and my entire family, it was indeed my clever and loving father saying, “My dear Richard, thank you for all of those years you tried to tell me there was life after death, that energy is neither created nor destroyed . . . I’m alive, accessing senses and capacities that are so far beyond anything one can ever have within the limitations of a human body”,(including being able to sense and locate an un-deposited, active check in the middle of a locked, dark and crowded storage unit), “and having a great time”.

And, perhaps even more importantly, it was my dear father saying, “Clean out that storage unit, take better care of your money and, especially, “I love you”!

And, on this anniversary, I want him to know that I love him so much and am so glad he took time from his Heavenly activities to check in, to say “hello” and to confirm that neither he nor anyone ever really dies.