Inhabit Your Own Desert: Lessons From The Ancient Orthodox Monks

by Phoebe Love: St. Antony and those who followed him learned that a desert of silence, solitude, and survival refines the heart… 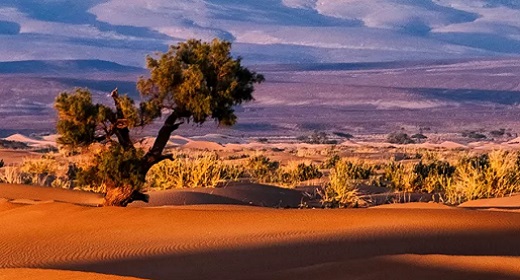 A red-tailed hawk soars above me. He lives in our woods, an old oak savannah we’ve been restoring where brambles invaded decades ago. Repairing woodland is a slow process, a constant battle against invasive species. Recovery is taking much longer than expected.

The hawk rides the wind over tree and field. A solitary soul flying, gliding, hunting, and watching. A quiet presence overseeing all. I named the hawk St. Antony for the first Desert Father and guide in Christian monasticism who lived in the vast wilderness of a fourth-century Egyptian desert.

Both St. Antonys became my comforters and guides during a long season of poor health. I spent three years in more isolation and solitude than I could have imagined. It was my own personal desert. With COVID-19, solitude became a way of life again. As I wait for recovery in the world, I’ve returned to the guidance of St. Antony and those who came after him.

St. Antony lived in a world that was complex and tumultuous. Though he came from a wealthy family, he could neither read nor write. Shame may have been a struggle. Perhaps he needed to look inward at a very young age. Maybe he cultivated an inner life of silence and longed to live it out completely. In time he would leave his modern life radically behind.

Antony felt called to leave a life of “doing” and enter a life of “being,” a life dedicated to seeking God in prayer. He followed the pattern of Jesus who was led by the Spirit into the desert. St. Antony was called to be alone, present to God, to himself, and to the forces within and against him. Eventually, he gave all his possessions to the poor and devoted his life to solitude and silence in a cave.

There he found God, a calling, and a wealth modern life could not replicate. He found stillness where he could train himself in the art of solitude. It wasn’t an escape from reality, however. He wrestled with his inner demons of pride and lust. He fought wild animals and dark forces. He described his spiritual battle “like a man filled with rage and grief.” He discovered that at the end of himself was the beginning of God and his true identity.

After Life of Antony (written by Athanasius of Alexandria sometime around 360) became a best-seller, others followed in Antony’s footsteps. They were drawn to the authenticity of becoming a whole person and honestly looking at the dark side of human nature as well as the goodness of being made and redeemed in the image of God. One desert proverb teaches, “The one who lives secluded in the desert is free of three conflicts: hearing, speaking, and seeing. There is one left—the heart.” The desert refined the heart.

This process happened in the wilderness of the soul as well as in the actual desert where they lived. Amma Syncletica, a Desert Mother known for her wisdom and candor taught, “The demons attack us from the outside, and they also stir us up from within; and the soul is then like a ship when great waves break over it.” Having lived this experience, her words carried great weight. “We must direct our soul with discernment,” she advised.

Discernment came in a variety of ways in the desert. But silence was the greatest teacher. It was a silence that wasn’t just the absence of noise, which we all crave from time to time, but the deep silence of God.

Silence opened a vast topography of prayer that matched the desert they were living in—an endless terrain of the soul dependent on God for salvation and survival. When another solitary monk, Abba Sisoes, was asked by a brother, “What am I to do?”—a common question from beginners—he said to him, “What you need is a great deal of silence and humility. For it is written, ‘Blessed are those who wait for Him.’”

Waiting for God became a way of life for the Desert Mothers and Fathers. They developed simple rhythms of prayer and work, intricately linking the two together. They left a rich legacy. Their stories, sayings, and spirituality are part of a collection called The Philokalia, meaning “love of the beautiful.” When the English translation was completed in 1995, the editors described it as “an itinerary through the labyrinth of time, a silent way of love through the deserts and emptinesses of life, especially of modern life.”

The search for meaning was the same in the fourth and fifth centuries as it is today. The call away from “doing” into “being” was so powerful that at one time 70,000 souls lived and prayed in the desert. Abba Theodoros explains the reason some are called into this experience. “Everything may be understood in terms of its purpose,” he taught. “The purpose of our life is blessedness, or, what is the same thing, the kingdom of heaven.”

My years of poor health dragged me kicking and screaming into the call of deep silence. It was a reluctant call but one that eventually brought blessing despite my resistance. I’ve returned to the call of the desert during the pandemic. I recognize its spiritual movements.

A barrenness of soul from the many losses of COVID-19 empties me of the things that define me. The brambles of fear and anxiety choke my heart. A cracked dry ground forms inside me where normally there’s a land of plenty I can depend on. An intense spiritual fire makes me thirst for something deeper. It’s the thirst from an ancient Psalm, “My soul pants for You, my flesh faints for You, in a dry and thirsty land with no water.” It’s a thirst that can only be satisfied by the pure streams of God running below the surface of my spiritual life.

As I watch the hawk, my St. Antony, reach his great wings for the sky and lift himself heavenward, I’m consoled. He reminds me that the work of bramble and barrenness is an essential work in his woods and in my life. It’s the work of God. It’s the work of the desert.