by Arika Okrent: Why is English spelling so weird and unpredictable? Don’t blame the mix of languages; look to quirks of timing and technology.. 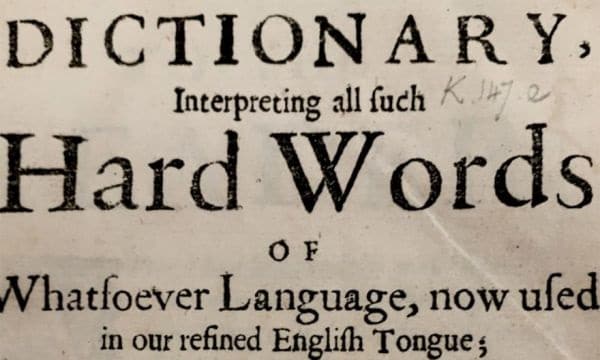 English spelling is ridiculous. Sew and new don’t rhyme. Kernel and colonel do. When you see an ough, you might need to read it out as ‘aw’ (thought), ‘ow’ (drought), ‘uff’ (tough), ‘off’ (cough), ‘oo’ (through), or ‘oh’ (though). The ea vowel is usually pronounced ‘ee’ (weak, please, seal, beam) but can also be ‘eh’ (bread, head, wealth, feather). Those two options cover most of it – except for a handful of cases, where it’s ‘ay’ (break, steak, great). Oh wait, one more… there’s earth. No wait, there’s also heart.

Admittedly, for a non-native speaker, such mastery usually involves a great deal of confusion and frustration. Part of the problem is that English spelling looks deceptively similar to other languages that use the same alphabet but in a much more consistent way. You can spend an afternoon familiarising yourself with the pronunciation rules of Italian, Spanish, German, Swedish, Hungarian, Lithuanian, Polish and many others, and credibly read out a text in that language, even if you don’t understand it. Your pronunciation might be terrible, and the pace, stress and rhythm would be completely off, and no one would mistake you for a native speaker – but you could do it. Even French, notorious for the spelling challenges it presents learners, is consistent enough to meet the bar. There are lots of silent letters, but they’re in predictable places. French has plenty of rules, and exceptions to those rules, but they can all be listed on a reasonable number of pages.

English is in a different league of complexity. The most comprehensive description of its spelling – the Dictionary of the British English Spelling System by Greg Brooks (2015) – runs to more than 450 pages as it enumerates all the ways particular sounds can be represented by letters or combinations of letters, and all the ways particular letters or letter combinations can be read out as sounds.

From the early Middle Ages, various European languages adopted and adapted the Latin alphabet. So why did English end up with a far more inconsistent orthography than any other? The basic outline of the messy history of English is widely known: the Anglo-Saxon tribes bringing Old English in the 5th century, the Viking invasions beginning in the 8th century adding Old Norse to the mix, followed by the Norman Conquest of the 11th century and the French linguistic takeover. The moving and mixing of populations, the growth of London and the merchant class in the 13th and 14th centuries. The contact with the Continent and the balance among Germanic, Romance and Celtic cultural forces. No language Academy was established, no authority for oversight or intervention in the direction of the written form. English travelled and wandered and haphazardly tied pieces together. As the blogger James Nicoll put it in 1990, English ‘pursued other languages down alleyways to beat them unconscious and rifle their pockets for new vocabulary’.

But just how does spelling factor into all this? It wasn’t as if the rest of Europe didn’t also contend with a mix of tribes and languages. The remnants of the Roman Empire comprised Germanic, Celtic and Slavic communities spread over a huge area. Various conquests installed a ruling-class language in control of a population that spoke a different language: there was the Nordic conquest of Normandy in the 10th century (where they now write French with a pretty regular system); the Ottoman Turkish rule over Hungary in the 16th and 17th centuries (which now has very consistent spelling rules for Hungarian); Moorish rule in Spain in the 8th to 15th centuries (which also has very consistent spelling). True, other languages did have official academies and other government attempts at standardisation – but those interventions have largely only ever succeeded at implementing minor changes to existing systems in very specific areas. English wasn’t the only language to pick the pockets of others for useful words.