by Vanessa Bates Ramirez: At the end of 2020, Boston Dynamics released a spirits-lifting, can’t-watch-without-smiling video of its robots doing a coordinated dance routine… 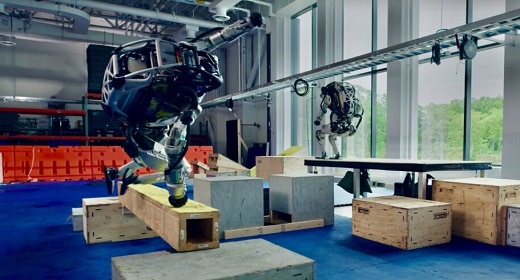 Atlas, Spot, and Handle had some pretty sweet moves, though if we’re being honest, Atlas was the one (or, in this case, two) that really stole the show.

A new video released yesterday has the bipedal humanoid robot stealing the show again, albeit in a way that probably won’t make you giggle as much. Two Atlases navigate a parkour course, complete with leaping onto and between boxes of different heights, shimmying down a balance beam, and throwing synchronized back flips.

The big question that may be on many viewers’ minds is whether the robots are truly navigating the course on their own—making real-time decisions about how high to jump or how far to extend a foot—or if they’re pre-programmed to execute each motion according to a detailed map of the course.

As engineers explain in a second new video and accompanying blog post, it’s a combination of both.

Atlas is equipped with RGB cameras and depth sensors to give it “vision,” providing input to its control system, which is run on three computers. In the dance video linked above and previous videos of Atlas doing parkour, the robot wasn’t sensing its environment and adapting its movements accordingly (though it did make in-the-moment adjustments to keep its balance).

But in the new routine, the Boston Dynamics team says, they created template behaviors for Atlas. The robot can match these templates to its environment, adapting its motions based on what’s in front of it. The engineers had to find a balance between “long-term” goals for the robot—i.e., making it through the whole course—and “short-term” goals, like adjusting its footsteps and posture to keep from keeling over. The motions were refined through both computer simulations and robot testing.

“Our control team has to create algorithms that can reason about the physical complexity of these machines to create a broad set of high energy and coordinated behavior,” said Atlas team lead Scott Kuindersma. “It’s really about creating behaviors at the limits of the robot’s capabilities and getting them all to work together in a flexible control system.”

The limits of the robot’s capabilities were frequently reached while practicing the new parkour course, and getting a flawless recording took many tries. The explainer video includes bloopers of Atlas falling flat on its face—not to mention on its head, stomach, and back, as it under-rotates for flips, crosses its feet while running, and miscalculates the distance it needs to cover on jumps.

I know it’s a robot, but you can’t help feeling sort of bad for it, especially when its feet miss the platform (by a lot) on a jump and its whole upper body comes crashing onto said platform, while its legs dangle toward the ground, in a move that would severely injure a human (and makes you wonder if Atlas survived with its hardware intact).

Ultimately, Atlas is a research and development tool, not a product the company plans to sell commercially (which is probably good, because despite how cool it looks doing parkour, I for one would be more than a little wary if I came across this human-shaped hunk of electronics wandering around in public).

“I find it hard to imagine a world 20 years from now where there aren’t capable mobile robots that move with grace, reliability, and work alongside humans to enrich our lives,” Kuindersma said. “But we’re still in the early days of creating that future.”