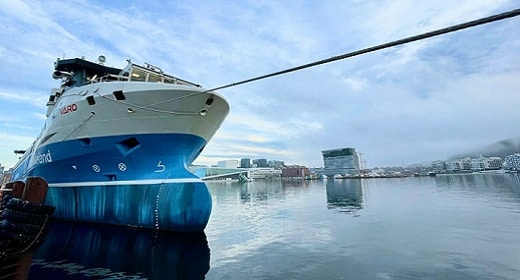 the world’s first electric and self-propelled container ship for emission-free shipping. The ship departed for its maiden voyage in the Oslo fjord – a small but promising step towards reducing the maritime industry’s climate footprint.

The Yara Birkeland will transport mineral fertilizer between Yara’s plant in Porsgrunn in southern Norway and its export port in Brevik, about 14 km (8.7 miles) away by road and will contribute to significant emission cuts during transport. It will cut 1,000 tonnes of CO2 and replace 40,000 trips with diesel-powered trucks a year. The ship was built by VARD with financial support from Enova and will be in commercial operation from 2022.

Now begins a two-year testing period of the technology that will make the ship self-propelled and finally certified as an autonomous, all-electric container ship. The ship will be operated from Massterlys’ – a joint venture between KONGSBERG and Wilhelmsen – monitoring and operations center in Horten.

An 80-meter-long Yara Birkeland can navigate at a maximum speed of 13 knots (24 km/h) and is powered by batteries provided by Swiss Leclanche packing 7 MWh over eight battery rooms. The ship will load and offload its cargo, recharge its batteries and also navigate without human intervention. It will be equipped with sensors to quickly detect and understand objects like kayaks in the water so the ship can decide what action to take to avoid hitting them. The world’s first electric and self-propelled container ship has the capacity to ship 120 20-foot containers of fertilizer at a time.

“This is an excellent example of green transition in practice, and we hope this ship will be the start of a new type of emission-free container ship. There are a lot of places in the world with congested roads that will benefit from a high-tech solution like this,” says Svein Tore Holsether, CEO of Yara.