by Kalee Brown: When I first started practicing yoga, I was relatively surprised at how easy and natural it felt to participate in chanting… 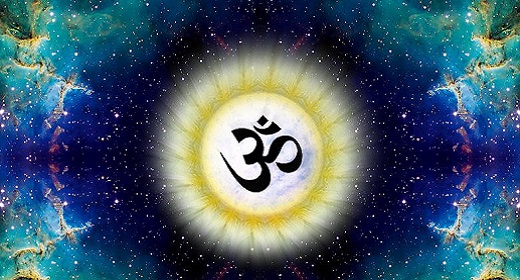 I had seen it in movies and heard of chanting within religious practices, but I’d never actually engaged in it until being in a yoga class. It’s a mantra that, without a doubt, holds a strong and high vibration, as you can literally feel it! There are numerous mental, physical, and spiritual benefits to chanting Om, and even some scientific studies have proven the health benefits.

According to the Vedas, typical sounds such as waves crashing against the shore, wind tossing leaves, etc., occur when they strike against each other, forming waves of air molecules that we then perceive as sound. However, the sound of Om evolves on its own, so it is seen as the sound of the universe, made up of all that is. As Yoganand put it, to chant Om is “to represent all of consciousness.” (source)

The Sanskrit word Om is pronounced like “Aum,” and is said to represent the threefold division of time (waking state, dreaming state, and deep sleep). Om also represents God, Source, or Universal Consciousness. It is considered the sound of creation, representing all that is in creation, and it allows for its practitioners to cultivate energy that flows upward through the chakras and then outward through the crown.

According to yogic texts, Hinduism, and Buddhism, Om is also the mantra related to the third eye chakra, as chanting Om can help to cleanse and balance your third eye. Om also relates to the crown chakra, which represents one’s connection to Source.

8 Benefits You May Notice While Chanting Om:

If you’re familiar with meditation, I’m sure you can imagine how chanting a mantra like Om could improve concentration. Yogic texts discuss the eight limbs or branches of yoga, and the sixth one is Dharana, the Sanskrit word for concentration. In practicing concentration, one can meditate and chant mantras in order to achieve maximum concentration. In this context, this means that the yogi is fully present and thus able to slow down the mind in order to either concentrate on one subject or to completely silence the mind.

If you’re ever feeling a little down or slightly off, chanting Om can help you connect to the Self and balance your emotions. You may find that, as you chant, your mind starts to clear. This is because you’re concentrating on one thing: the sound or vibration that Om gives off. Om holds the same frequency as that of everything in nature, allowing you to connect further and look inwards.

When you pronounce the first part of Om, making the “Aaaa” sound, the vibration is generated in the abdomen, which can help support your spinal cord. It is said that the more often an individual chants Om, the more efficient their spinal cord may become.

A Harvard study found that meditation can mitigate symptoms of Irritable Bowl Syndrome (IBS) and improve gut health. The study showed that by inducing the Relaxation Response, participants showed reduced symptoms of IBS as well as decreased anxiety and overall better quality of life. Chanting Om can also induce the Relaxation Response, as this is a common meditation practice. So, next time you have a stomach ache, perhaps chanting Om could help your stomach issues as well!

In the past, meditation has been proven to improve heart health. If one practices chanting Om multiple times in a row, this can be viewed as a form of meditation, especially because an integral part of chanting Om is the silence endured afterwards. A study performed in 2006 looked at the effects of transcendental meditation (TM), a form of meditation whereby the practitioner continuously repeats a mantra, and concluded that TM can improve blood pressure and cardiac autonomic nervous system tone and decrease risk of coronary heart disease.

A 2010 study looked into the effects chanting Om has on the mind. Researchers found that chanting Om resulted in a combination of both mental alertness and physiological rest. This makes sense given the fact that meditation and chanting can improve concentration!

Helps Rid Yourself of Negativity

Chanting Om creates a positive vibration in the body, which can then attract positivity into your life. Chanting Om allows you to focus on your third eye chakra and gaze inward, silencing your mind. If you find yourself engaging in negative self talk a lot or can’t seem to stop thinking, try chanting Om a few times and see if that can help your mind slow down!

There’s no right or wrong method when it comes to chanting; everyone can do it and everyone may sound a little different! Sometimes I’ll chant Om a couple times while driving, or especially after practicing yoga. It helps me calm my mind and turn inward, remembering the love we all have within us. Don’t be afraid to step out of your comfort zone and try it too!