Meditation: The Key To Inclusion

by Adam Brady: Our world can be a divisive and polarizing place… 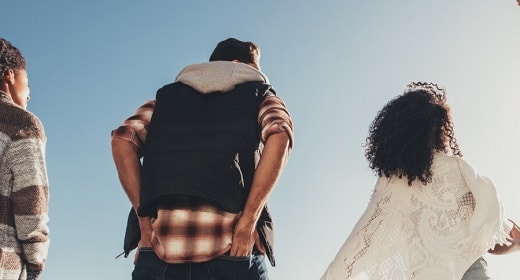 Recent times have been a testament to this as we have collectively witnessed what feels like an ever-growing rift in our society. Disparities in race, gender, sexual identity, economic status, and ideology are like open wounds that have been unable to heal.

With every step forward we make toward equality and unity, it seems as if we take three steps back. The danger is that without healing, these divisions will continue to fuel an endless cycle of anger, hatred, and violence that becomes more deeply rooted with each incident.

Our ability to reach unity in diversity will be the beauty and the test of our civilization. – Mahatma Gandhi

Human beings are communal by nature and our primitive ancestors created a tribal structure to protect its members from outside influences that could threaten the safety of the family or clan. We were suspicious of outsiders and anyone that was different than we were. Afraid of the unknown and quick to attack those unlike ourselves, our communities were built to exclude anyone who wasn’t like us. This tendency was a basic expression of the fight/flight and reactive responses of our nervous system – hardwired patterns of conditioned behavior designed to ensure our survival and the continuation of our species.

Unfortunately, this behavior didn’t just disappear as our societies began to evolve to include an increasingly diverse population. Being fearful and intolerant of people unlike us continues to live on in the more primitive parts of our nervous system and at times all it needs is a stressful situation for it to express itself in our thoughts, speech, and action.

What’s the answer then? How can we transcend our old, antiquated, fear-based, discriminatory, and intolerant behavior? In a world that seems poised on the brink of the next confrontation, what can we each do to usher more peace, compassion, acceptance, harmony, equality, and love?

In a word, meditate.

This may sound like a woo-woo, overly simplistic answer, one that can’t possibly have any real influence on the problem, however the true power of meditation lies not just in its ability to relieve stress and achieve well-being, but rather in its potential as a functional peacemaking and consciousness-transforming tool. Regular meditation can influence every aspect of our being, from the gross physical nuts-and-bolts level to the more subtle mental and emotional layers, to our subconscious karmic conditioning, and right down to the cellular level of our being. And when meditation becomes a consistent practice, it triggers an evolution in our consciousness that expands our awareness beyond the old limiting worldview of separation and division to one of unity and inclusion.

Let’s take a look at how meditation helps to promote an inclusion-based mindset:

Relieves the fight or flight and reactive responses.

Division and defensiveness are the born out of fear-based states of awareness. Both the fight or flight and reactive responses are rooted in fear and anxiety. Meditation allows the mind to settle into the stillness of the Restful Awareness Response, down-regulating the nervous system’s danger-signals. When we’re calm, settled, and relaxed, we’re much more able to think, speak, and act from a more clear and open state of awareness. Meditation allows us to lower the temperature and stand down from red alert from where we can see things in a non-survival-based context.

Meditation helps us to see things “as they are” rather than the way we think they are. Our preconceived notions influence our perceptions at subtle levels making it challenging to see things as they truly are, or for that matter, from the point of view of another. With meditation, labels and judgements loosen their grip allowing us to see things, people, and situations independent of our feelings about them. We’re more able to “step into another’s shoes” and try to understand their suffering.

Unconscious biases are stereotypes and judgements about certain groups of people that are formed outside of our conscious awareness. In other words, we don’t know we have these biases. They operate below the surface, subtly influencing our choices and creating potential micro-aggressive behavior. The expanded space of meditation can help us become more aware of the prejudices we may be harboring and begin to dismantle them. Meditative awareness “turns on the lights” so we can more clearly recognize the outdated beliefs that no longer serve us and take steps to change them.

Compassion is a routine by-product of a regular meditation practice. When we step outside our fortified sense of self (our ego) and have glimpses of the stillness at the core of our being, we more easily recognize what we have in common with others. Regardless of race, gender, sexual identity, economic status, or ideology, we all share the human experiences of growing old, sickness, suffering, and death. No matter our differences, we have all laughed, cried, known joy, experienced fear, and wondered at the mystery of life. With the expanded awareness cultivated through meditation, our hearts are more open to the suffering of others and are more willing to help relieve it.

Without awareness, our day-to-day communication can often devolve into a mindless exchange of information without any real connection. The space cultivated during meditation allows us to experience a deeper, more mindful exchange with others. We become more conscious of our speech and how we can make it more inclusive and affirming. Additionally, we begin to listen more deeply, paying full attention to not only what is being said, but also to the unspoken needs another may be hoping to convey.

Holding space is our ability to be present with others, allowing them to feel safe, heard, accepted, and free from judgement. The expanded sense of space experienced during meditation often spills out into other areas of life and creates an ideal environment for diverse points of view to be shared and valued in which acceptance and allowing become the norm, not the exception. In experiencing our own deeper sense of space during meditation, we eventually begin to carry that sanctuary and haven with us wherever we go. We embody a comforting and healing presence from the deepest level of our being, helping others feel comfortable in speaking their truth.

Research has revealed that meditation creates brain wave and heart coherence, especially when practiced by large groups of people. Coherence is the orderly functioning of the entire system in a manner that supports overall well-being and resists the tendency toward entropy, or the increasing randomness and disorder that causes systems to break down. Coherence creates a holistic and healing atmosphere for both those meditating as well as those within the immediate environment. This field of coherence is an ideal space to nurture inclusivity and the value inherent in all individuals. What’s more, the stronger the field of coherence, the closer we move collectively toward an ultimate tipping point of creating equity for all individuals, everywhere.

The hallmark of discrimination has always been an “us versus them” mentality. It is sustained by a belief that says, “For another to win, I have to lose.” However, when we meditate, the boundaries between us and them dissolve and we recognize that those divisions are artificial constructs that exist only in our minds. As our awareness expands, it embraces everything; there are no boundaries, no divisions between people, nations, or forms of life, giving way to the ultimate realization, that we are all one. Tat Tvam Asi: I am that.

As you see, meditation may be the most productive manner to create both an individual and societal environment of inclusion. With our awareness we can change the world, and as meditators, we have the ability, and responsibility to help shift the global conversation from one of separation, division, and alienation to one of acceptance, compassion, and inclusivity.