The Hyperloop Is Hyper Old 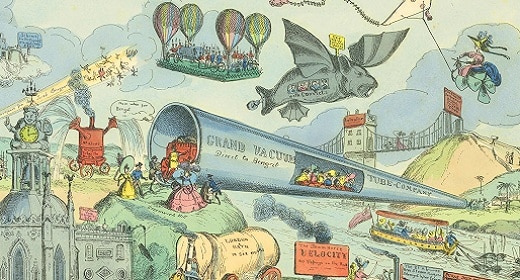 “Lord how this world improves as we grow older,” reads the caption for a panel in the ” March of Intellect,” part of a series of colored etchings published between 1825 and 1829. The artist, William Heath (1794–1840), shows many futuristic contraptions, including a four-wheeled steam-powered horse called Velocity, a suspension bridge from Cape Town to Bengal, a gun-carrying platform lifted by four balloons, and a giant winged flying fish conveying convicts from England to New South Wales, in Australia. But the main object is a massive, seamless metallic tube taking travelers from East London’s Greenwich Hill to Bengal, courtesy of the Grand Vacuum Tube Company.

Heath was no science-fiction pioneer. Hisfanciful etching was just a spoof of an engineering project proposed in 1825 and called the London and Edinburgh Vacuum Tunnel Company, which was to be established with the capital of 20 million pounds sterling. The concept was based on a 1799 proposal made by George Medhurst: A rectangular tunnel was to move goods in wagons, the vacuum was to be created by the condensation of steam, and the impetus was to be “the pressure of the atmosphere, which…is so astonishing as almost to exceed belief.”

Yes, this is the first known attempt at what during the second decade of the 21st century became known as the hyperloop. That word, coined by Elon Musk, constitutes his main original contribution to the technology.

By the time Heath was drawing his intercontinental conveyor, enough was known about vacuum to realize that it would be the best option for achieving unprecedented travel speeds. But no materials were available to build such a tube—above all, there was no way to produce affordable high-tensile steel—nor were there ready means to enclose people in vacuum-moving containers.

Less than a century later, Émile Bachelet, a French electrician who emigrated to the United States, solved the propulsion part of the challenge with his 19 March 1912 patent of a “Levitation transmitting apparatus.” In 1914, he presented a small-scale working model of a magnetically levitated train with a tubular prow, powerful magnets at the track’s bottom, and tubular steel cars on an aluminum base. 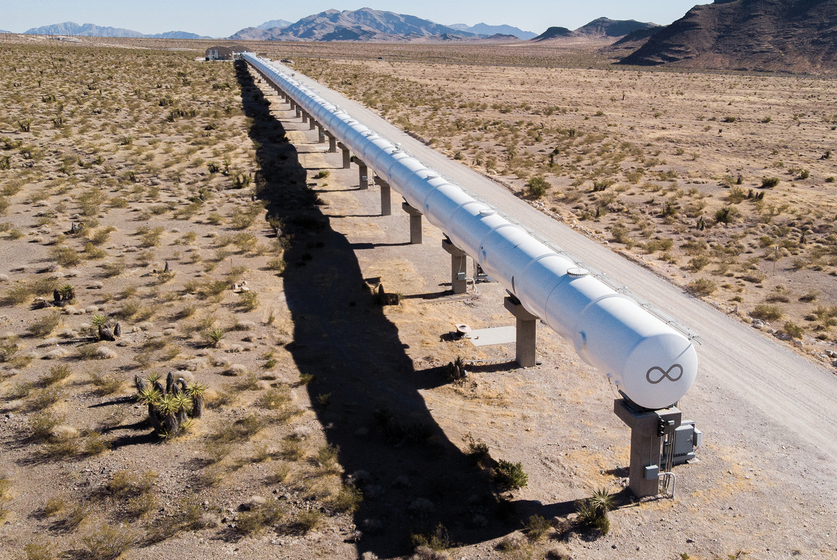 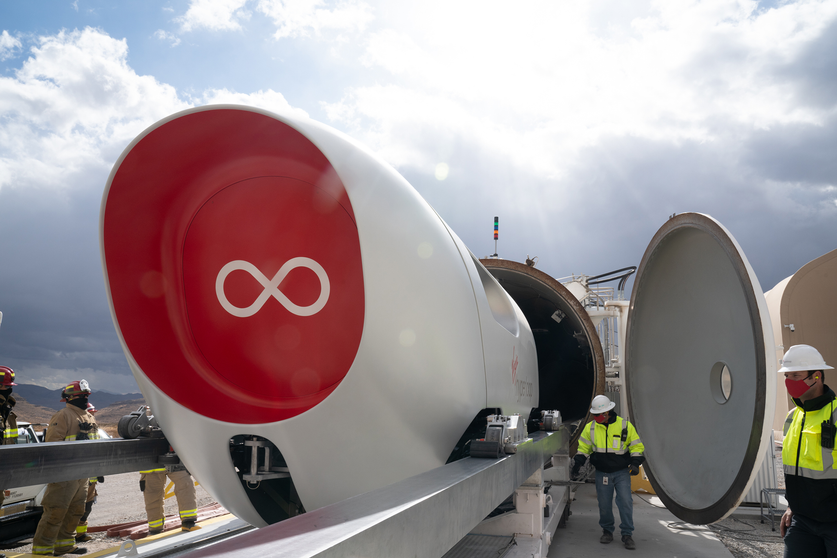 Virgin Hyperloop, which aims to commercialize the concept, has built a test track in Las Vegas [top]. The passenger pod [middle] is magnetically levitated; it can be introduced into the vacuum tube through an air lock [bottom] at the end.VIRGIN HYPERLOOP

Japanese researchers have been experimenting with a modern version of Bachelet’s maglev concept since 1969, testing open-air train models at a track in Miyazaki. Short trials were done in Germany and the Soviet Union. In 2002, China got the only operating maglev line—built by Siemens—running from the Shanghai Pudong International Airport to Shanghai; now China claims to be preparing to test it at speeds up to 1,000 kilometers per hour. But outside East Asia, maglev remained nothing but a curiosity until 2012, when Elon Musk put his spin on it.

People unaware of this long history greeted the hyperloop as stunningly original and fabulously transformative. A decade later we have many route proposals, and many companies engaged in testing and design, but not a single commercial application that can demonstrate that this is an affordable, profitable, reliable, and widely replicable travel option. Vacuum physicists and railway engineers, who best appreciate the challenges involved in such projects, have pointed out a long list of fundamental difficulties that must be overcome before public-carrying vacuum tubes could be as common as steel-wheel high-speed rail.

Other, nontrivial, problems run from the common and intractable—obtaining rights-of-way for hundreds, even thousands, kilometers of tracks elevated on pylons in NIMBY-prone societies—to the uncommon and unprecedented: maintaining the thousandfold pressure difference between the inside and outside steel walls of an evacuated tube along hundreds of kilometers of track while coping with the metal’s thermal expansion.

Before rushing to buy shares in a hyperloop venture in 2022, remember the 1825 London and Edinburgh Vacuum Tunnel Company.