by Margot Anand: It is so unusual that it had to be told. It starts with my first love making experience, a sexual satori that turned into a spiritual awakening… 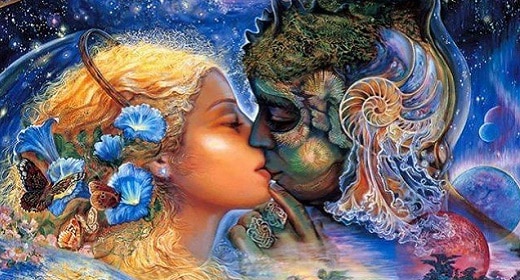 That night also laid the foundations for my destiny, which was -though I did not plan it this way – to pioneer a new sexual/spiritual renaissance in the West. I was the first person to lead wild multi-cultural Tantra groups in India, and to introduce Tantra to the west.

Not a philosophy, or the translation of some new Sanskrit Sutra, or the transmission of some long forgotten Yoga, the method I brought back, called SkyDancing Tantra, is the most radical sexual/spiritual practice currently transmitted. It was revealed to me in the most amazing ways, often in out of the body experiences, or through making love all night with one and sometimes two men, or while meeting remarkable mystics around the globe, and especially through Tantric practices.

Love, Sex and Awakening : Finding God in Bed could be called : Memoirs Of A WildWoman. It is not just another book on sex. It is an epic saga, the magical, wild, mystical, shocking, revealing, even seemingly impossible, global adventures of a Wild Woman who chooses freedom and awakening over all else. And who feels that her ultimate spiritual potential will be expanded through unbound, free, Tantric sexual explorations… because only when you accept the risk of jumping into the unknown and living life to the fullest, beyond ordinary limits, can you open the door to the mystical dimension of Tantra.

Because of my first Satori, I became an explorer of the land of sexuality. I explored with the mission to enlighten sexual ignorance, to bring healing and respect to this most wondrous and delightful, if often reviled, activity. In the process, I have been to all the frontiers of the mind, body, and spirit, and taken tremendous risks. I risked my life, my health, my sanity, my body. I have been wounded, betrayed, used, and abused. But I have also received tremendous gifts of pleasure, delights both intimate and public, as well as national and international recognition. And I have returned to tell the tale and draw the wisdom lessons, which I have now shared with some 30 or 40.000 people. Each tale, while it may talk of love or sexuality or relationship or jealousy, will also carry a spiritual teaching, and sometimes a political and psychological teaching which will be woven into it as well.

Until now, of my five books with some 700.000 thousand copies sold in 16 countries, no work of mine has taken readers behind the scenes, and revealed the raw process of my explorations. The body of work I have presented so far consists of a method, a series of trainings, a philosophy of life, a formal spiritual guidance.

For the first time, in this book, readers will step behind the scenes into the private life of the teacher, of the lover, of the sexual and spiritual pioneer. Readers will discover how orgasmic powers awaken the chakras and unleash wild and healing energies which transformed my life and the life of those around me. They see from the inside how an amazing Vipassana Meditation retreat can heal the wounded mind trying to recover from a divorce. They share the humanness and vulnerability of a teacher so gifted at healing others and often so clumsy at keeping herself out of trouble.

In this book, angels appear, masters transmit, lovers seduce, women heal, in a high voltage travelogue that crosses the globe. Each adventure reveals how Eros awakens the wild self in each of us, loves to break rules, opens the spirit, heals the body, expands the heart, and reveals new possibilities, which push us to new frontiers.

Tantra is a spiritual path like Yoga or Zen. But it is often called “the shortcut for the courageous.” Indeed, in the unleashing of the most powerful, often violent, basic urges and instinctual energies, for the purpose of healing and purification, the practitioner can get “stuck” at the level of orgasmic indulgence, rather than pursue the more difficult, yet rewarding goal of spiritual awakening. It happened to me, and I lived to tell the tale. And show why even that is a risk one must confront on the way to transcendence.

This book will be a wild book of a life which reads like an adventure story, full of conflicts, resolutions, plots and counter plots. Each adventure carries lessons in wisdom. Tantric wisdom. But also everyday wisdom. It was in the very living of each tale, that I received the transmission of the teachings. In most unexpected moments. As it often happens.

My life saga will require that the readers be ready to embark on a wild ride that will inspire them to live beyond their current limits, show them that heroic adventures leading to ecstatic awakenings are still, and more than ever, available and possible.

In this book we are enter into actual multi-dimensional realities. Real life Masters and mystics appear and give often hilarious transmissions. We move beyond time and space, to reveal the soul of sex and spirit at the source of creation. We meet angels, patriarchs, gods and goddesses face to face. We talk to Buddha and other prophets. Those who are dead become revived, and those who are alive sometimes disappear into thin air before our eyes. And reappear later in other forms. Such are the tantric tales. And such is the life of a Tantric High Priestess.

And yet, the stories are real. They all happened to me. I was indeed a pioneer although I did not set out to be that. And as such I was helped and guided with infinite compassion by all the magicians who always appeared on my path at the right moment.

To conclude this short introduction, I wish to say that I have never had more pleasure in writing than in crafting this book. And I have never felt more ready than I feel now to stand behind this book and to do the leg work needed to make it a resounding national and international success. After five books published, I know the field. I have numerous videos and audio lectures and interviews at the disposal of those who will mastermind the P.R. of this book. I have attended such professional, eye opening workshops as Ariel Ford’s “Book Publicity University” in which writers met producers of national TV shows and the producers of Border Books’ book signing programs, and those who (brilliantly) coach authors to present their books successfully in three minutes. I have attended such prestigious teaching forums, as the Maui Writers’ Conference and others. I expect and intend to have a best seller that will surpass the sales and success of all my previous books. And a totally unique memoir that will continue sell in the back list for many years.

Why do I think this is possible? Because, there are no other such books on the market. I have no competition in an area with which a broad audience is fascinated. There is not a single other female Tantra teacher and pioneer who is better known than me, or who has had such a wild, global, epic life as I have. Also, I am crafting this book so that it will not be a book reserved just for a limited public of those who are interested in Tantra. The stories in this book are for everyone. And they can touch everyone, because they address concerns shared by every person on the globe. And because I have worked with so many people, and spoken at so many conferences, I know how to weave a tale that touches hearts. And when a book stands alone, it has a very good chance to GO BIG !!!