World Could Install 250 GW Of Solar This Year

by Ryan Kennedy: Rob Barnett, a senior clean energy analyst for Bloomberg, forecasts a 30% increase in global PV deployment this year, and double-digit growth through 2025… 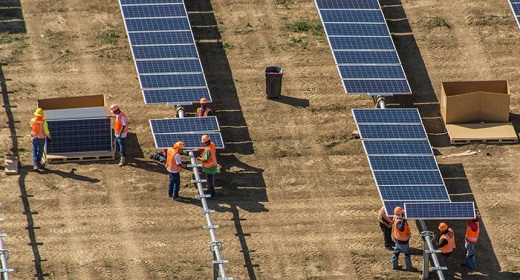 Demand is pushing solar growth across the world to new heights, as Bloomberg senior analyst Rob Barnett forecasts deployment to increase by 30% this year. Total global solar deployment is closing in on 1 TW installed – an impressive milestone for the energy transition.

“The global solar picture is just staggering at this point,” Barnett told Yahoo Finance. “We are on track to install something like 250 GW of solar capacity this year.”

China is contributing the largest share to capacity growth this year, with about 108 GW of new operational PV. This is a near-doubling of the roughly 55 GW installed by China last year. The country has the world’s largest exposure to renewable energy, with 323 GW of solar and 338 GW of wind energy. President Xi Jinping aims for 1,200 GW combined by 2030, and the nation is currently ahead of schedule on that goal, said Bloomberg.

Renewable energy is hitting all-time highs in the United States, too. Renewable generation from solar and wind installations reached 28% in April – a new record for the category. And Barnett said the solar boom has just begun.

“There really is this big, top-line growth scenario that we see unfolding for all of the companies that are participating in the solar supply chain,” said Barnett.

Climate goals are one driver of the red-hot demand for solar, but Barnett said there is another force that is accelerating demand in the near-term.

“I would actually argue that the bigger driver for clean energy demand, particularly here in Europe, is elevated energy costs,” he said.

Costs continue to fall for PV, making it increasingly cost-competitive with oil, which has spiked in price since the Russian invasion of Ukraine. Shipments of solar modules have fallen precipitously over 20 years, from $4.88/W in 2000 to $0.34/W in 2021, based on a recent report by the Energy Information Administration.

Barnett said he expects solar demand to retain its momentum, even if oil and natural gas prices cool off.

“It’s certainly possible that if you had some easing in the traditional fuel markets, that it might take the accelerator off, but I don’t really see that as being a material risk on the demand side of the equation for clean energy,” he said.

This demand-side momentum is likely to continue as prices improve and the global economy targets decarbonization.

“I do think that the economics are already quite good. And so you’d have to see such a sea change in terms of gas prices or coal prices, if you’re thinking about the power grid, to really reverse some of the trends. And I just don’t think there’s any appetite for it either,” said Barnett.