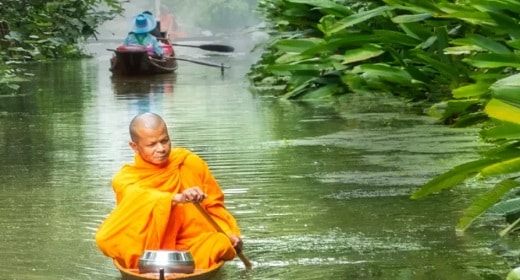 “Anger is a common and potentially destructive emotion that turns many a human life into a living hell,” notes Oxford University psychiatrist and philosopher Dr. Neel Burton. However, he contends that we can learn to control our anger “and even banish it entirely from our lives.”

His insight finds agreement with Buddhism. More specifically, the Sutra of Bequeathed Teachings cautions: “Anger can ruin all good practices and it is not soon forgotten. It is attractive neither in the present nor when viewed later as something belonging to the past. When anger begins burning out of control like a raging fire, protect yourself and do not let it consume you. Like a thief this fire will take away everything you have.”

Learn From the Empty Boat Story

“Anger doesn’t just happen to us,” says Buddhist teacher and author John Daido Loori. “If we’re able to catch an angry thought as it’s budding, we can let it go.” The following Buddhist parable supports his insight.

With permission from the monastery abbot, a monk borrowed an old boat and rowed out into the middle of a lake for his afternoon meditation session. It was a truly peaceful place to meditate as the boat gently floated. After more than an hour of undisturbed silence, he felt the bump of another boat against his. Though his eyes were still closed, he could feel anger swelling within at the careless boatman who didn’t prevent the lake collision.

Upon opening his eyes, all he saw was an empty boat, which he realized had become untied from the dock and merely drifted out into the lake, bumping up against his. Immediately, the monk experienced a flash of enlightenment, one that would serve him well for the rest of his life. “The anger is within me,” he thought to himself. “All anger needs is a bump from the outside to be triggered and provoked out of me.”

From that moment on, whenever another person irritated him and he could feel even the slightest anger rising, he gently reminded himself: “The other person is an empty, floating boat. The anger is within me.”

Tibetan Buddhist monk Dzigar Kongtrul observes: “When we get angry, we lose the dignity of our intelligence.” Interestingly, a medieval Jewish ethical text, translated as The Way of the Righteous, shares the Buddhist concern, advising us to be mindful about our speech when emotions are hot during difficult personal times such as:

Remember That Your Anger Hurts Others

In his book Miniatures of a Zen Master, Robert Aitken tells about twin sisters he knew who were Holocaust survivors. The mother died and they were raised by their father. After the war, he took the young girls to see their family home in Northern Italy. They located it and the new owner graciously allowed them inside before the father could properly identify himself. In the living room he saw the piano he used to play, books he used to read, and a variety of art pieces. The new inhabitant soon realized what was happening, became angry, and insisted they leave.

Highly agitated, the father gathered up his girls and began driving the narrow Italian mountain road. He was so angered by the injustice that he drove not only carelessly but recklessly. His little girls were terrified. The car went over the mountain edge but, miraculously, settled on a ledge overlooking a steep canyon. “The father came to his senses,” writes Aitken, “but not before his daughters also experienced some of their father’s horrors.”

Remember That Anger Is Self-Sabotage

Not only does your anger hurt those around you—it can have a deep, profound, and lifelong impact on your own wellbeing. Anger, says Buddhist nun Ayya Kehma, “makes a groove in the mind so that anger arises more and more easily. That’s why we often find old people are crotchety. Everything around them becomes disagreeable. They’re never happy because the negative groove in the mind has become so set they can’t get out of it anymore.”

Avoid allowing this to happen in your life by denying anger’s power to grow stronger. This is something practiced by the Dalai Lama: “If I were to develop feelings of vindictiveness, anger, or hatred towards the Chinese, who would be the loser? I would, because I would thereby lose my peace of mind, my sleep, and my appetite. At the same time, my bitterness would not affect the Chinese in the least. If I became extremely upset, that would also prevent me from making those around me happy.”

Allow a Role Model to Guide You

Whenever you feel anger emerging, try to create a brief pause and ask yourself a question like: “If the Dalai Lama were in my shoes, how would he feel? How would he handle this situation?” You can insert the name of any person who inspires you, for example:

“When you are angry, you become physiologically aroused (your heart rate increases, your muscles tense up, and so on),” says anger researcher Ray Martin, PhD. “Respond by taking long, slow, deep breaths, using the diaphragm rather than just the chest. Deep breathing is one of the best ways to relax when in a tense moment.”